6 Creatures That Should Be In Your Food Forest 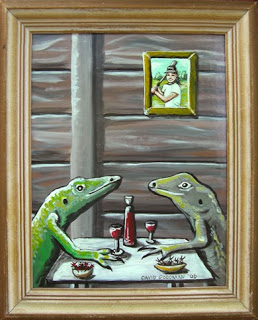 I built upon my birdhouse post from the other day and really thought more on what animals should play key roles in a healthy food forest system. Once I made a good list, I wrote it into a new article for The Prepper Project.

“Over the holidays I had an epiphany. As I was considering my
front-yard food forest and the new plants I should add in the spring, I
realized that I should plan in some new habitat for animals as well.

If you’ve read this site for very long, you know we’re a fan of
putting chickens to work in our planned edible ecosystems. Though that’s a good start, chickens are also high maintenance and almost always require supplementary feed unless you make careful (and extensive) plans to feed them completely off your land. Beyond chickens, other domesticated animals that can be (carefully) added include ducks, guinea fowl and even pigs.

Yet in nature there are a lot of other creatures that do plenty of
work behind the scenes. Many of them aren’t usually recognized as our
partners in food growing. Some are considered little more than nuisances to be fought with.

If you’ve dealt with moles, deer, squirrels or crows, you know what a
pain some animals can be. Even these have their place, of course, but
today I’m going to focus on six “good guys” and how you can add them to your plans, starting with one insect that always get a bad wrap. Let’s
jump in!

I like writing for the guys at The Prepper Project. They’re good folks, plus the deadlines and wide range of topics force me to keep thinking about what I’m doing and how I can share it with a broader audience. That said, don’t forget to sign up for the free upcoming Survival Summit so you can hear (and see) my Extreme Composting presentation. It’s going to be fun.

An urban food forest in an empty lot

I have lived with wood-boring bees for 44 years and had several opportunities to watch them at work. Here (St. Louis, MO) they seem to have two kinds of projects. One is laying eggs and the other is creating and living in a nest/hive. I don't know if these are both solitary bee types, since I've never seen the inside of the nest.

The laying eggs project seems to be a one-time thing, as in they don't keep coming back to the same hole every year, they build a new one each time. They drill a perfectly round hole about a half inch in diameter into the underside of wood. I have a small balcony attached to my house, made of three or four 2 by 6s. I don't know if the original wood was treated or painted, but as they got older, the bees drilled out more and more holes. Before we replaced them, there was so much drilling going on, there were piles of sawdust below them. So the bee suspends itself in mid-air under the wood, and drills up. When the hole is deep enough that the bee can go in it, it turns and drills sideways. The eggs are laid in this tube. When the eggs start to hatch out, they evidently make noise. Woodpeckers hear this and come and peck out the wood to get to the eggs to eat them. It really wrecks the wood.

The other kind of project occurred above the balcony in the small strip of wood over the windows between the stone of the house walls and the vinyl-covered eaves. It looks like the same kind of hole, but after a while, stuff starts coming out of it. Maybe a mixture of waste and honey? It got very messy, with that stuff streaking down the windows, plus I didn't know what was happening to my attic, so I called a pest-control dude. He pumped alcohol into the holes with a pump sprayer. He claimed it wouldn't kill the bees, just stun them, and then they would fall out of the holes, sober up, and fly away. Then we filled the holes with a foam stuff that expands and hardens, so they wouldn't come back. And to keep them away, we covered that exposed wood strip with cut pieces of metal. It worked, but they moved to the porch eaves. I don't know where they went after I had the porch redone and covered the outside wood with metal/vinyl. There are plenty of trees around with dead branches, plus the house next door that is all wood siding and has been vacant for years.

Before the porch was redone, there were a lot of skinks living in the roof. One of them got into the house, and I couldn't catch him to let him out. He would come out of hiding to sit in the sun on the carpet every morning. I started putting down water for him, hoping he would find his way out before he died, but I don't think he did. He lasted at least a couple of months, but then I stopped seeing him, and later I found a dead skink behind the freezer.

When we had a little place in North Georgia, they had similar bees which they called carpenter bees. Those bees were huge and drilled right through any wood they wanted. Definitely not a bee you want, or the wasps that live on/in the ground. However, the black snakes are great. Among other things, they help keep down the “low life”, extra lizards, frogs and other critters. I think they are great! The black snakes, that is.