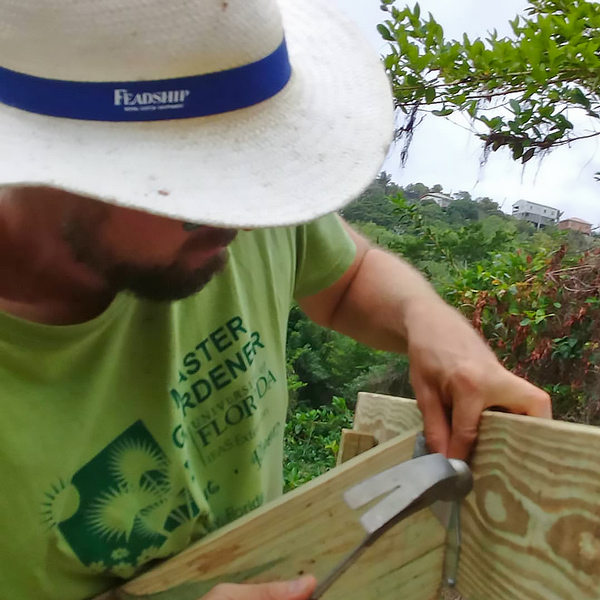 This was a whirlwind year. Two trips overseas, a new baby, building a home and writing books – busy!

I was in a funk before Christmas as we prepared to move to our land, thinking how I didn’t get much done over the course of the year. No matter what goals I set, I generally feel like I’m getting less done than I should.

Yet as I started to run through what was accomplished, it got to be more impressive than I thought.

Let’s run through the year, starting with the year’s big focus – building a house.

We closed on our land on Christmas Eve of 2018. Then we started working towards getting it cleared, adding water and electric service, etc. We rapidly discovered that many local contractors were not competent, and I decided to build the entire house myself.

I started with a little shed, built with a hammer and nails and a skilsaw.: I couldn’t decided on a house plan and I turned a lot of different things over in my head. I had gotten building estimates from a few contractors on a few different plans previously, but it was too expensive to build what I was thinking about – and I didn’t know how to do it, either. I’ve never built a house.

I was faced with paralysis, not sure what to build or how to build it.

Then I had this crazy thought: why not build a little circle of tiny houses, like a village? Building one little building would be good practice for another one, and there’s not a lot that can go seriously wrong when you build something small.

I met an out-of-work South African who claimed to be a contractor, and on June 12th we went to work building a small cabin. Neither of us had done much (if any) wood framing before, so we made some stupid mistakes. I learned from the mistakes as I went, however, and we got the first little building up in a few weeks. Here’s a shot from July 2nd: There were plenty of dumb mistakes made on that little building, but it still came together into a very cozy little cabin. Having accomplished it, I decided to build an office next, using what I’d learned. That turned out better and stronger than the first building, plus it looked better inside and out. After completing it, I decided to add a laundry room lean-to to the first cabin, followed by a larger workshop lean-to on the side of the office. Then I went to Indonesia in September as an agricultural consultant for Kingdom Workers. When I came back, my South African contractor had done more work alone – this time blockwork – and it was becoming obvious that his idea of good work and mine did not line up, so we parted ways amiably and I decided to attack the rest on my own. I’m quite grateful for the irrational self-confidence he shared that got us started on this project, but now I have become more than capable of managing the rest of the house-building.

We started with nothing on the land at the beginning of 2019 and ended with a 12×16 cabin, a 3-bin compost pile made from concrete block, an outhouse, an 8×12 art studio/office, an outdoor shower, running water and electric, an 11×15 workshop, an 8×12 laundry room, an outdoor covered work area and a shipping container – plus a larger foundation built this month, as I hired a contractor to put in a serious concrete slab for a main house that I will build in 2020, Lord willing.

Despite my idea of having little cabins, I decided I would rather be under the same roof with my family, rather than having us spread out. It just feels more loving and close, not to mention safer.

If you’d like to follow the house-building adventures, you can do so on my Unauthorized.TV channel. More on that in a minute.

Near the beginning of the year, as we were making plans for our house, we discovered to our shock that Rachel was expecting our ninth! This was a bit of a complication as Rachel had hoped to help document the house-building and be more of a part of the process, rather than being hugely pregnant – but we were still happy for the blessing. Our little girl arrived safely on November 11th, and there was much rejoicing. One of the reasons house-building got started later in the year is because I was finishing up Free Plants for Everyone near the beginning of the year. That has gotten the best reviews of any of my books so far and I am grateful for all the support and sales.

I also managed to finish writing the first draft of Garden Heat: A Jack Broccoli Novel (AKA Jack Broccoli II), but did not get to finish editing and re-writing it yet. That’s a project for next year.

On my birthday in July, the family and I planted a food forest on our land, filling the front yard with fruit trees of all sorts:

I also started planting an edible hedge along the edges of the land:

At the beginning of the year, we also planted multiple beds of yams and cassava but those have been eaten by the jungle as we’ve been building. I’m sure we’ll dig some roots out of all the mess at some point.

Early in the year, I launched the regular evening Goodstream where we had a great time live, talking gardening and other topics. It was a success, though it proved hard to keep up and I put the show on hiatus about a month ago while we move and build. Our new land also lacks internet, which will make livestreaming more difficult.

Early in the year I was asked if I wanted to join a YouTube alternative and offer subscriptions to exclusive content. I agreed and helped launch the new service. As I was getting ready to build, I started wondering how wise it would be to post my house-building on my YouTube channel for everyone to see, since I was less than sure about local codes and building, etc., so I decided to launch a show for Unauthorized subscribers titled Tiny House Expat Living. Over the course of the build so far, I have chronicled our progress in these episodes, posting them only to Unauthorized.  We’re up to 21 episodes so far, starting right at the beginning of the first cabin being built. I also posted multiple other videos on Unauthorized. At last check, I have 132 paying subscribers there. Thank you for the support – it’s been great having a small cadre of Good Gardeners encouraging us onward.

In March I gave two talks, one in Ft. Lauderdale at The Great South Florida Food Forest Project, then another one in Carolyn Smith’s backyard north of Gainesville. About two hundred people attended and we had a great time. I’ll probably do another, longer tour in 2020.

In September I was sent to Indonesia to do some agricultural consultation work for Kingdom Workers. For two weeks I visited multiple villages and gave input on gardening organically and conserving water and humus. The people there were wonderful and I was blessed by the experience.

It took too long to get started on house building this year, which kept us paying rent longer than I would have liked. I also did not manage to get Jack Broccoli II published during the year. YouTube revenues were also flat. Gardening was almost non-existent, except for the many little trees I grew on the front porch. Unlike most years, we bought almost all of our food instead of growing it. I found out quickly that building a house and growing gardens are very difficult to do at the same time.

My mom visited this year, which was wonderful. We were also blessed with a new little girl, which is fantastic. And, as I type, we are now living on our own land at long last.

It was a good year. I hope yours was as well. Glory be to God, who sustains us and provides more than we need!

All in all, it sounds like a very productive year. Congrats, and may the New Year see as much success if not more!

Hey my brother like your videos and am very much serious about practicing your methods of planting am from the Caribbean island Call Grenada. You said you in the tropics, I think I can picture out some places in your video and I it seem like you in my Village. I WILL LOVE to link with you to learn all that I can about the way you grow food.my number is 5368856 local # Ok David

Can’t wait to see more Tiny House Expat Living and whatever else you have in store. Glad you’re on your own land, there’s nothing like it.

Thank you. I am feeling very satisfied to be gardening in my own soil again.

Haven’t been on your site for quite a while, but now it’s fun to catch up; you and your wife are so humorous and industrious. You have a ton of ideas. Land sake! Keep tight with the Lord, and don’t get exhausted!