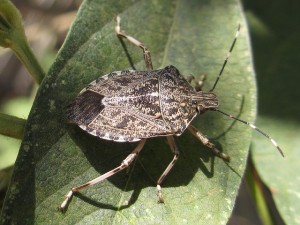 Stinkbugs are one of the most irritating pests faced by gardeners. Right about the time your tomatoes, peppers and other vegetables start to ripen… stinkbugs go on the attack, piercing, sucking and causing damage, rotten spots and fruit drop.

A couple of weeks ago, a regular reader – the Ancient City Gardener – e-mailed me the following:

“Hi David, I would like to pick your ex-master gardener brain. In the past I’ve had problems with stinkbugs ruining my tomatoes. Do you know of any organic way to control them? I was thinking of maybe a hoop house covered with screen….but I’m just not sure. Maybe a blog post from the master?….. but ‘I’m not worthy.’ Any advice would be appreciated.”
“The master.” As much as I might like to claim that title, I’m just a redeemed mortal. If you ever saw me outside, holding my head in my hands and weeping over fire-ant destroyed potatoes… well… let’s just say that no matter how good you get at gardening, there’s always a lot more to learn.
But I digress.
Stinkbugs need killing, or at the very least, discouraging. I’ve done some research and worked out some control methods, plus I have brilliant friends who have come up with their own novel ways to defeat this malodorous scourge.
Let’s take a look at the top five methods I’ve come across.

Dealing With Stink Bugs, Method 1: The Pick and Drown

Picking and drowning sounds like a great album title for a Mississippi folk trio, but as much as I like some rootsy guitar, that’s not today’s focus.
Stinkbugs aren’t the fastest insects in the garden, meaning that if you’re dealing with a small infestation, hand control works well.
Insects breathe through their carapaces via breathing holes known as “spiracles.” Say it. It’s fun. If you drop an insect in a cup of water, it often takes a really long time to drown… unless you break the surface tension. This can be done by putting a drop of dish soap into a container of water. Knock the stinkbugs into the container and they won’t be bothering any more tomatoes.
You can then throw the cup of dead stinkbugs to your chickens or add them to your compost pile.
Stinkbugs are rich in nitrogen – why not use it?

I have a friend with an IQ somewhere north of me, up in the lofty fractal peaks of hard science. He’s always coming up with labor-saving ways of gardening, raising fish, homesteading, saving water, etc. Recently he keyed me into his stinkbug control method via an e-mail:
“This is the best I have found so far, a $5.00 mosquito net, stops squash bugs and leaf miners and worms in one shot ( you have to pollinate the plants yourself  unless you get the self pollinating plants they use in greenhouses )
http://www.ebay.com/itm/Elegant-Lace-Bed-Mosquito-Netting-Mesh-Canopy-Princess-Round-Dome-Bedding-Net-/151278620541?pt=US_Canopies_Netting&var=&hash=item2338e88f7d”
Cheap and effective, though probably not practical for larger spaces. As long as tomatoes get shaken a bit by the wind, they’ll self-pollinate, though the same isn’t true for squashes and many other garden plants. When I asked if I could share his method, my friend agreed and shared another link for those of you interested in plants that don’t need pollinating insects:
http://www.ehow.com/info_8166461_list-selfpollinating-vegetables.html

Don’t feel like using nets or picking stinkbugs by hand? Trap them!
Another friend recently sent me this video of an ingenious trap devised by a man with a stinkbug-infested house:
Never underestimate the power of problem-solving men. If you live in an area with regular rainfall, you might have trouble with these traps getting ruined outside, but I’ll bet it would be easy enough to shelter them somehow. You’ll also likely catch a lot of other insects, including good guys, but it’s still definitely worth trying.
(CLICK HERE to discover 2 more methods over at The Prepper Project!)

Twice Stabbed Lady Beetle Convention
The Koi Pond at Bok Tower
Wait! What's in the bag? A surprise?
The Marvels of the Rainforest: Cecropia, Insects and Ganoderma Mushrooms!
Growing Potatoes to Feed the Soil

What Happens When You Add Habitat

Hm. Mosquito netting. I might consider mosquito nets to protect my butternut squash plants from that other scourge of gardeners- the Squash Vine Borer moths. I've been picking new eggs of my plants every single day, but it's time-consuming work.

They got my very healthy pumpkin vines in the food forest. Didn't have any problems with them last year… but this year, it seems we'll be pumpkin-less.

Squash vine borer larvae killed mature seminole pumpkin vines? Now, that's surprising. I've seen the vines survive because the larvae live in the center of the vine. If the vines are large/thick enough, the vine wall can survive the larval damage and keep supplying nutrients further down the vine.

They're actually "Tan Cheese" pumpkins, but borers are my bet.

Thanks for the great information, David! I've only seen a few stinkbugs in my garden this year….but it's still early as far as the garden is concerned. I will follow your advice, except for eating them. Blaah!

I dusted the squash bugs one season with Diatomaceous Earth. I kept it up all summer on the little ones and big ones and it did not reduce their numbers. They just kept comin'. I think I read, with DE, that it works on soft bodied insects, not hard bodied (such as squash bugs).

Squash bugs are way too tough.