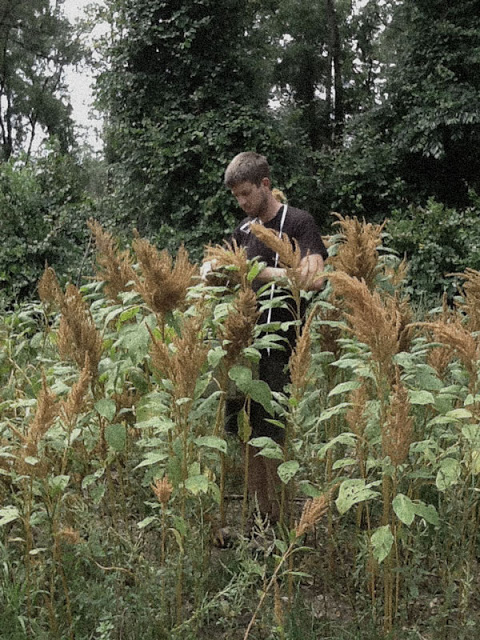 Excerpt of dialog from the new film “My Time Among The Amaranths:”

Natasha: Billy… how can you stand it?

Natasha: This. This here. The emptiness. The aloneness.

Billy: But I’m not alone, Natty; (waves hand about) They’re with me.

Natasha: I wish you wouldn’t talk about them like they’re alive!

Billy:  But they are! They’re as alive as you and me. Maybe even more alive. Look at these golden heads. These leaves, reaching for the warm light of heaven…

Billy: I know, Natty. But this is where I feel at home. This is my family.

Natasha: They’re not your family, Billy! I’m your family! And the kids… do you even know how old your daughter is now, Billy? Or your son?

Billy:  The amaranths, Natty! Are you blind?

Billy: Look at Old Sport over there! And Alicia! She’s about to sprout a second head!

Billy:  It’s not, “eww!” It’s nature! It’s love and death and good earth and blue skies, Natty! It’s yearning to release your pollen to the winds and lean into a driving rain so the water reaches your roots!

Natasha: You’ve been out here for two years, Billy. Two years! Have you any idea how hard it is to deal with two children who have lost their daddy to a field of… stupid, stupid plants!?

Natasha pulls a wicked-looking machete from beneath her skirt.

Natasha: I’m sorry I have to do this.

Natasha begins swinging the blade, slashing through the stalks around her, despite Billy’s yells.

With a desperate leap, Billy jumps on Natasha’s back and throws her to the ground. In one sickening instant, everything goes to slow motion and we realize Natasha has impaled herself on the blade.

Billy: Natasha! Oh no, what have I done? This is all your fault! You attacked them, you killed them! You killed my friends! My family! And now I’ve killed you!

The sun sets behind the scene as Billy weeps over the fallen body of his wife… and the amaranths she murdered. The sun rises again the next morning and we see Billy burying the body.

Final scene: a last shovelful of earth is deposited on the fresh grave… and with a shaking hand, Billy scatters amaranth seeds across the newly disturbed earth…

Summer Rain in My Florida Food Forest
Art blog re-launched: new painting up
A fascinating look at a modern heirloom bean
2016: The Year in Review
Learn This Super Easy Gardening Method for a Survival Food Supply

Is the Weather Channel dumb?

Okay – no weekends for me!

This is what happens when you go too long without writing a good horror short story. It bursts out of you anyway, like in Alien.

I feel a sequel coming on . . . killer amaranths grown from those seeds scattered across the newly disturbed earth.

Hmmm, can you share some of that you're sipping? 😉

I’m the Survival editor at Before It’s News. Our site is a People Powered
news platform with over 4,000,000 visits a month and growing fast.

We would be honored if we could republish the rss feed of Florida Survival Gardening in our Survival category. Our readers need to read what experts like you have to say.