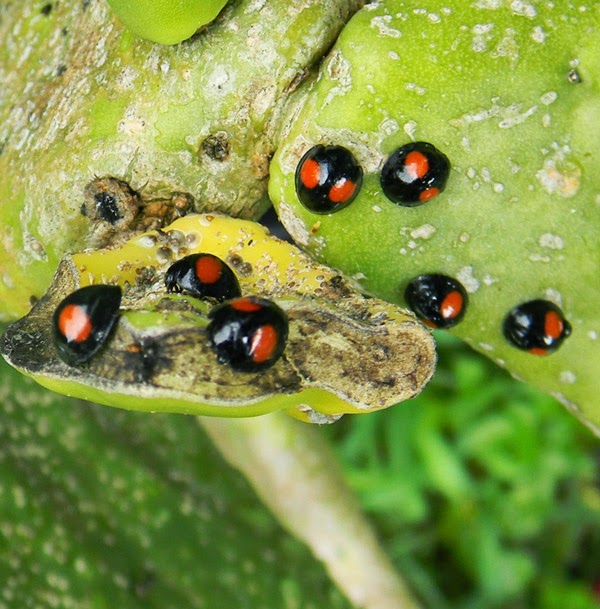 My nopale cactus has been the host to multiple groups of twice stabbed lady beetles over the last couple of weeks: The cactus has been suffering from scale insect attacks for over a year.
I’ve crushed them by hand and blasted them off with water a few times, but the things keep coming back. You can tell by the scarring in the photos that the suckers have taken their toll.
Eventually they might have killed the plant. That is, if God hadn’t designed some failsafes into the ecosystem. Like twice stabbed lady beetles. I mean, it’s as good as the “hearts-a-bustin’-with-love” plant.

If I had sprayed the plant with something toxic… or even something relatively mild, like garlic spray – I wouldn’t have been able to see these beautiful ladybugs in action.

Sometimes being a lazy gardener has its perks.

(For more on the Twice-Stabbed Ladybeetle, check this out.)

New Video: Planting and Growing Sweet Potatoes The Easy Way
Growing corn in mulch
@The Prepper Project: The Winged Yam
Survival Plants
The webworms are back - but so are the good guys
beneficial insectsladybugsnopaletwice-stabbed ladybeetle
2 comments
PinterestWhatsappEmail

I've never in my life seen ladybugs like these! And yes, twice-stabbed ladybeetle is an absolutely epic name.

Can't believe how many scars there are on your cactus. Will it look different after the ladybugs are finished with it? I'd love to see some "after" shots ;).

The old growth seems to retain the scars… but the new growth will be fine. They tend to fade as the plant ages.

The after shots will probably involve me eating the plant for dinner. 😉