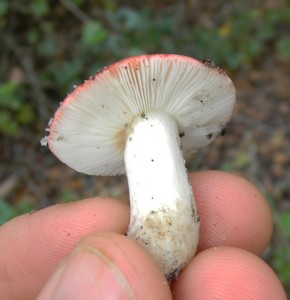 Among gardeners, fungi don’t get a lot of love. They usually range in a gardener’s mind from being a minor curiosity (“hey, look at that weird slime mold!”) to being a threat (“what the heck is making these things rot???”).
Rare is the gardener who raises his own mushrooms. Rarer still is the gardener who sees the ground beneath his feet as a vast network of teeming fungal life. Rarest is the gardener who deliberately feeds that fungal network.
Yet without fungi, life on planet earth would grind to a painful halt… and your fruit and nut trees? Kaput.
Today let’s take a quick look at the great things fungi accomplish for your plants – and then talk about adding more of them to your homestead!

Lignin is part of the cell walls of plants and is partially responsible for the long length of time it takes wood to decompose. When decomposed, it forms a significant amount of the humus in the soil. Since many decomposer organisms find lignin indigestible, it’s up to fungi to break it down.
Without fungi, we’d have lots and lots of wood lying around. Ever pull a mold-covered plate of unidentifiable food from your refrigerator? (No? Never? It’s just me, then?)

Mold is fungi. Just as fungi break down wood, they also happily break down spaghetti noodles, tomatoes, Chinese take-out, etc.
The digestion process allows plants to use the nutrients that might forever be bound up in a stale tuna sandwich and put them to better use.

Beyond just breaking down dead things, some fungi actually connect to tree roots and greatly extend their ability to take up nutrients.
Imagine connecting a great big antennae to your radio: that’s what fungi do for a tree’s ability to reach out and take what it needs. The tree gives the fungi sugars; the fungi in turns reaches out for minerals and brings them back to the tree. They’re particularly good at making phosphates available, which means you have less fertilizing to do in a fungi-rich environment.

Now this is really weird.
Remember the film Avatar? That movie with the giant blue New Age Indian tribe and that huge tree that gets knocked down by a rather silly caricature of the Evil Military-Industrial Complex? Fungi are the interconnectors of nature. They join different tree and plant species together and even allow them to communicate on a rudimentary level. I don’t understand how it works, but somehow when one tree gets injured or attacked by a pest, some fungi are able to transmit its distress to other trees in the vicinity. Those trees can then jack themselves up with alkaloids, etc., so they become less palatable to critters…
(CLICK HERE to keep reading over at The Prepper Project!)

Yes! Reading the book Forest Gardens, reading about fungal-dominated soils in forests and bacteria-dominated soils was a revelation to me. Ever since then I have dragged in every rotten log I could find to border my small forest garden beds. As the logs begin to decompose (they sink right into the soil) I prop more logs on top of them. I have already quadrupled the number of mushrooms I see in the yard, I hope to quadruple it again.

I've also found that it's really easy to substitute the words "fungal dominated" for "keep 'em separated" when singing along with The Offspring.

I knew fungi around our yard and gardens had to be good for something. We always leave them be and now I know why.