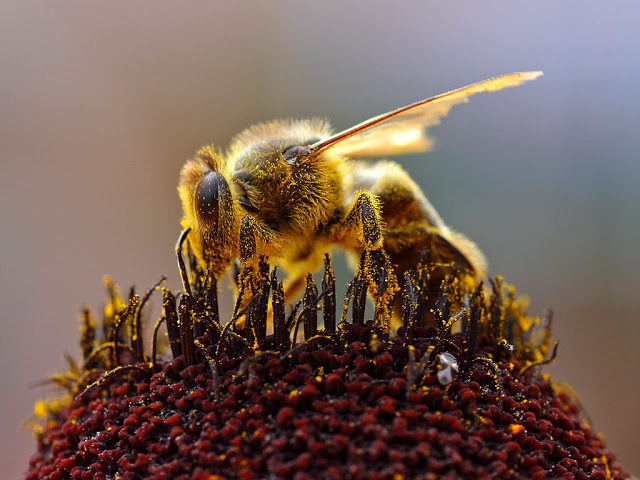 I asked my friend Allen for his thoughts on bees – below is what he sent me last week – consider it a free beekeeping lesson. He started with the following quote, then continued:

“In the temperate zone, honey bees survive winter as a colony, and the
queen begins egg laying in mid to late winter, to prepare for spring.
This is most likely triggered by longer day length. She is the only
fertile female, and deposits all the eggs from which the other bees
are produced. Except for a brief mating period when she may make
several flights to mate with drones, or if she leaves in later life
with a swarm to establish a new colony, the queen rarely leaves the
hive after the larvae have become full-grown bees. The queen deposits
each egg in a cell prepared by the worker bees. The egg hatches into a
small larva which is fed by ‘nurse’ bees (worker bees which maintain
the interior of the colony). After about a week, the larva is sealed
up in its cell by the nurse bees and begins the pupal stage. After
another week, it will emerge an adult bee. For the first 10 days of their lives, the female worker bees clean the hive and feed the larvae. After this, they begin building comb cells. On days 16 through 20, a worker receives nectar and pollen from older workers and stores it. After the 20th day, a worker leaves the hive and spends the remainder of its life as a forager. The population of a healthy hive in mid-summer can average between 40,000 and 80,000 bees.” –Infogalactic

“There on Wikipedia are the basic essentials of bee keeping – all you have to do is anything a matriarchal society wants!

My opinion: **PLEASE DO NOT TREAT EVERY COLONY AS AFRICANIZED!! Let a professional that WANTS to help the environment make that decision.  Chances are if you are NORTH of Okeechobee …you will never see an african bee. I’ve met a South African just as interesting, but much less harmless (unless bored), but that’s another story.

Most people want to grab the first can of toxic ingredients at hand
and go after bees. This is wrong on too many levels, STOP!!! Remember you are poisoning YOUR environment too.

Call a local Apiarist. Most pest control companies will tell you “they don’t
handle honey bees,” and thankfully now (unless they’re a dire threat) they won’t kill them either, so what to do?

So now to the common sense. Don’t spray them with water if you see a swarm colony on the move. (Many have done it; therefore, I must say it!)

DON’T worry. Typically, they hang around for a few days and move on. They are just waiting on the slow relatives to catch up so they can
get to their new home.

If you feel the need to “check them out,” wear light colored clothing, no loud smells and watch them from a safe distance (they will let you know what that is.) When you see a honey bee, one of the biggest signs is before a bee stings, you will get bumped. Due to their sense of self preservation, they will
NOT sting YOU at the first chance – they want to live too. If you get bumped, back off and enjoy their company and unless IN a home of their own they will go away soon enough on their own.

And hey… what’s the worst that could happen? A new colony gets a fair start – and all the flowers have had all the sweet tenderness they need to make seeds for the next generation of food… and O2 for US!”

Great Fruit Trees for the Deep South: The Persimmon

Learning Beekeeping from an Experienced Beekeeper: A Visit...