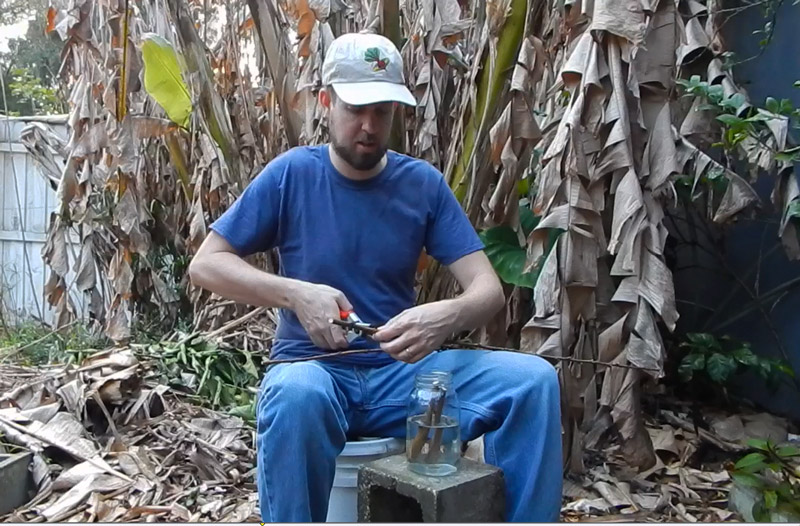 I had some technical issues with the blog, hence the late post today… but better late than never, eh?

I’ve finished my grafting video demonstration and will have it available soon. Though I’m by no means an “expert,” this almost hour-long presentation will help you lose your fear of grafting and get going on your own property. In the film I demonstrate three methods: the whip and tongue graft, the side veneer graft and the cleft graft. I also share some interesting cross-species grafts, look at the reasons for grafting, show you my simple grafting tools and a lot more. It was good fun and contains everything you need to get started in grafting.

One thing that’s become quite evident as we filmed was the need for a better video camera. We’re using a moderately simple Nikon L830 Coolpix that does good on landscape-style images and portrait shots but really fails on the autofocusing during close-ups… and I’ve found no way to switch it to manual focus.

That means that though the camera can potentially do a nice job on close-up images (as seen in my Hipster Dave coffee video), it regularly jumps in and out of blurriness as the auto-focus grabs for whatever it “sees.”

This was maddening for filming close-up grafting shots so the viewer can actually tell what’s going on with my cuts. Some of the grafts I performed were filmed multiple times on multiple branches and we still couldn’t get them to stay completely in focus. Rachel and I wanted to make this film perfect (or close) but the camera wasted too much of our time and we finally threw in the towel on getting it perfect. It’s still got a lot of good information and value, but it’s not as perfect as I had hoped.

My grafting demonstration video is going to be offered as a download on a “donation” basis, at least for this spring.

I’ve been researching a new camera so we can significantly improve the YouTube channel and film more instructional gardening films. I have a lot of plans for the future. I’d also like to do better close-ups of insects, plants and fungi for the blog and we just don’t have that capability right now with our consumer-grade camera.

So with that in mind, I’ve decided to put all the money that this particular project raises towards the purchase of a pro camera. I’m guessing we’ll have to drop between $600 – $1200 for a solid HD DSLR that also does good still-shots. I’m not the type to just ask for money (I’ve been told many times I should set up a “donation” link on the site and just can’t bring myself to do that), so I’m offering this new video instead. You can give $0.01 or $1,000,000 if you like and get the film, though if you give the latter I’ll probably just hire Andi to write this blog so I can buy a tropical island and try to bring back the dinosaurs.

For now, though, I’ve gotta get back to my editing.

The Secret to Easy Florida Gardening (No One is Telling You)

So if there isn’t a link, how do we make a donation, and when do you expect the video to be ready?