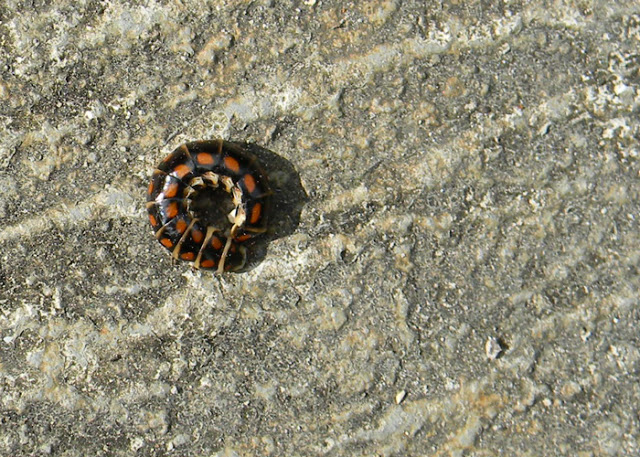 I found a railroad worm on a walk around the neighborhood: This specimen is an adult female. Strangely, the females keep the appearance as a larva (they call it a “larviform” species) whereas the males mature into a beetle form.

Though I kept this gal in a jar until after dark, she wouldn’t glow. I set her free in my blueberry patch where she promptly buried herself in the mulch.

What do they eat? Millipedes! This is good, since nothing else seems to eat those creepy grey monsters.

If you find a black and orange insect that looks like a millipede but actually eats millipedes… you’ve probably found a railroad worm!

My mother-in-law gas found rairoad worms in her home how can she get rid of them?

Just catch and release them outside. They are very uncommon and aren’t a pest. In fact, they eat other insects.

I believe this is what I found last night in my yard. I’ve never seen anything glow in the dark like that before, certainly not in Michigan. I took some pictures of it. With the flash it looks grayish or kinda white person flesh colored. Whatever it was I was very happy to have found such a fascinating insect.

I saw where you had a toxic hammerhead worm on your finger and wonder why you never said it was toxic and ate other worms, earthworms and redworms