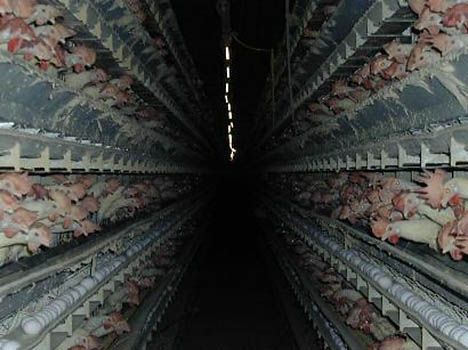 With apologies to Paul Harvey (and Dodge), I present the following:
And on the 666th day Big Agriculture looked down on God’s
paradise and said, “I think we can do this better than God.” And so Big
Ag made a factory farmer.
Big Ag said, “Let’s have farmers get up before dawn and pop suction cups onto the cracked and bleeding teats of undernourished cows stacked into concentration camp-style paddocks, spray some poison on the fields, crank up the milker again, eat supper and then go to town and stay past midnight with some lobbyists that will help keep ’em profitable. So, Big Ag made a factory farmer.

Big Ag said, “We need controllable illegal labor. Strong enough to pick up 100lbs of dead chickens from the floor every morning, yet gentle enough to castrate a piglet without anesthesia. Some poor Pedro or Miguel to spray ammonia on tainted meat, feed afterbirths into the incinerator, come home ill from chemicals, dust and manure and have to wait for dinner until his wife is done cleaning the home of some lawyer in town under the table while she’s praying her husband’s not sent back across the border by us.”

Big Ag said “We need folks that can dress in hazmat suits and eliminate every scrap of greenery from a million acres, cull sub-par and sick animals and feed them back to their former stallmates. And… who, every season, will create massive amounts of toxic run-off from manure, antibiotics, herbicide, pesticide and various other poisons that will stick around for centuries. Then, as if that’s not enough, we’ll have ’em destroy millennia of careful plant breeding by introducing GMOs that will spread their hacked genes across the land.”

Big Ag had to have somebody willing to glue rotten meat together with enzymes and re-grade it as expensive cuts. So, Big Ag made a factory farmer.
Big Ag said, “I need somebody weak enough to live in debt and sell their souls… and yet stupid enough to destroy feet of top soil, help create super-bugs through massive use of toxins… and who will live off subsidies that pay him other people’s money to plant one field and not plant another.” So, Big Ag made a factory farmer.
It had to be somebody who’d never question what they’re doing… and never consider the new diseases and risks they could unleash. Somebody to grow corn to burn in gas tanks, or make into sugary concoctions that cause obesity and heart disease. Somebody to rake and disc and plow the earth until it’s as dead as the lunar surface. Somebody who’d bail his family out with debt, who’d sit on his fat butt and eat processed crap from the grocery because all he ever grew was one huge monocropped plot… and then respond with a sneer when his son says he wants to start “something organic” instead.
So, Big Ag made a factory farmer.
Instead of supporting Big Ag, buy my book Florida Survival Gardening to learn how to grow your own food in Florida.

Paul Gautschi of Back to Eden talks about chickens and GMOs

But… but… Mr. Survival Gardener. Why do you hate America? WHY???

How fortunate for Big Ag that factory farmers do not think.