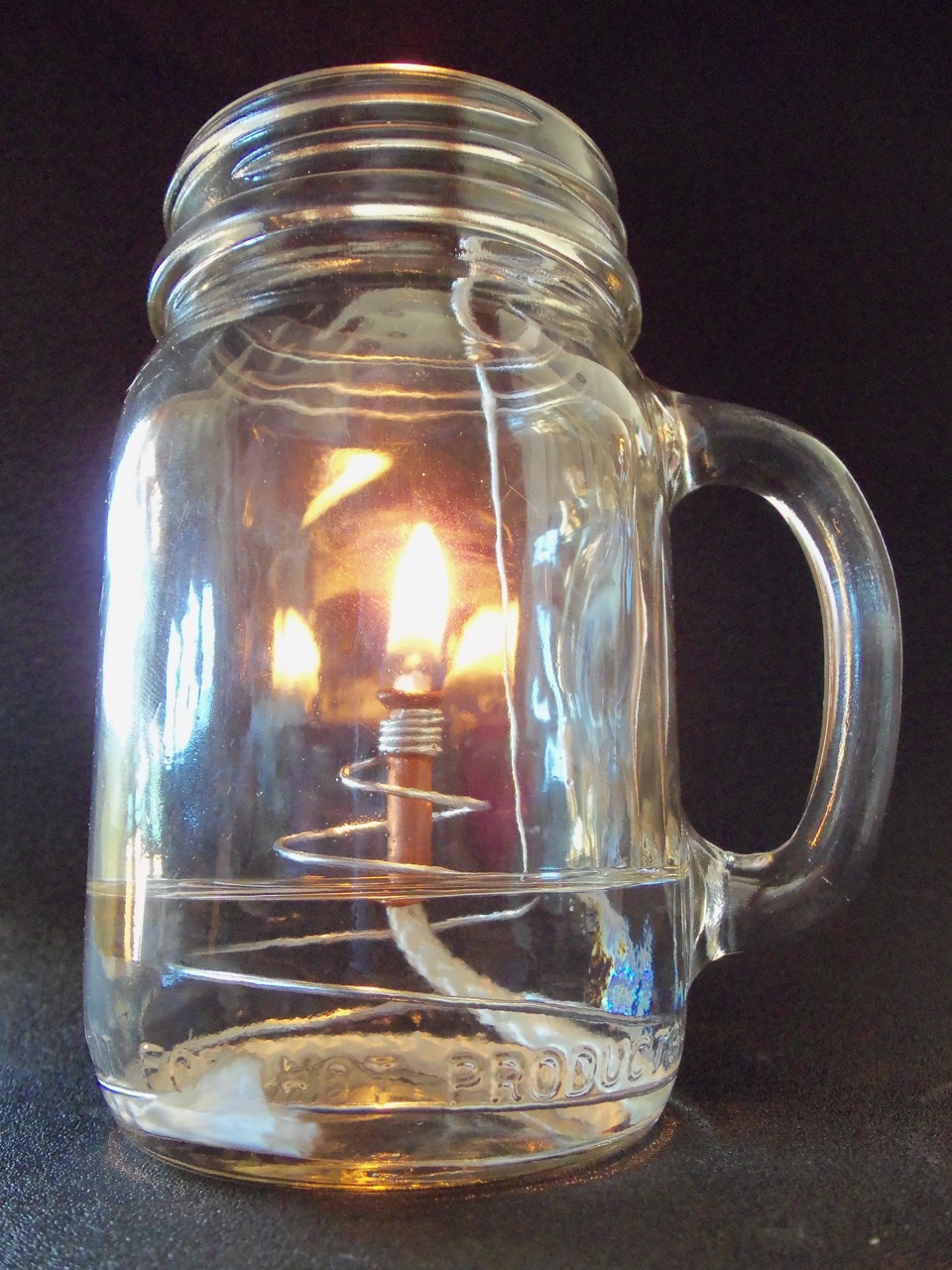 I’ve made quite a few little oil lamps in the past and Rachel and I have lit the house with their smoky flames but the “Bright Betty” is really the best oil lamp design we’ve seen yet.

My friend Herrick never ceases to amaze me – his recent posts on how to make a “Bright Betty” oil lamp are no exception. He also shares how you can build your own oil lamp with readily available parts.

In Part 1 he shares the concept and why these lamps work so well: “The basic concept of an oil lamp in a jar is nothing new. You can find similar jar-lamp tutorials elsewhere on the internet. And, as already noted,  Lehman’s sells jar lamps for burning olive oil. But the Bright Betty is a bit different than other jar lamps, especially the olive-oil-fueled lamps.

First, my Bright Betty lamps have a fiberglass wick, not woven cotton. Fiberglass is better. The other difference is that my Bright Bettys burn liquid paraffin instead of olive oil for fuel.

Read the customer reviews at the Lehman’s link (above) and you’ll see that their little wicks put out a very small amount of light. But Bright Bettys are vastly better light producers. Not like a lightbulb, mind you, but it’s a downright satisfying and useful amount of light. I’d say one Betty puts out the light equivalent of several candles…”

Then in part two and part three he shares how to build your own Bright Betty oil lamp while including lots of photos.

For emergencies, preparedness, off-grid cabins and other applications, this design looks like a total winner. I also dig the way Herrick keeps them on his emergency shelf with a pack of matches inside the handle of each lamp.
It’s the little things. Honestly, I can’t even remember to put my wallet or glasses in the same place from day to day.

Though is the best oil lamp design I’ve seen yet, I still wonder if it could be tweaked to burn used cooking oil instead of liquid paraffin. Cooking oil is abundant. Would it be too smoky? Or would the wick sputter out?

That said, liquid paraffin lamp oil is really nice stuff to burn. I have a pair of these German-made hurricane lanterns that run wonderfully on it.

By the way, if you don’t own Herrick’s idea book for gardeners… WHY NOT? Go buy it!

Why You Should Be Growing Potatoes

Well, what a nice surprise to see that you have told all your Good readers about my Bright Betty lamps! And you mentioned my garden book too. And you even mentioned me in your recent “Big Fat Interview.” Thank you, David. You are a gentleman, and a scholar, and a fine judge of…. coffee beans!

Someday I hope to blog about the fat lamp I made a few years ago. I modeled it after a very old one I saw (and bought) on Ebay. I rendered some deer fat and used it in the lamps and it not only put out some good light, it also smelled surprisingly good.

And you really should post on the fat lamp. I will link that too.

Also, I think the Bright Betty deserves its own YouTube video.