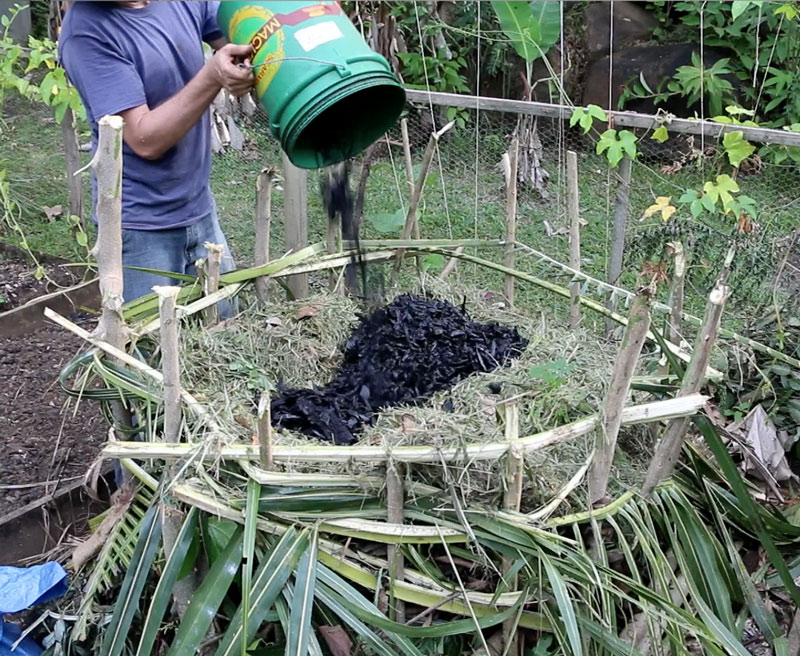 Several times when I heard the college kids talk about biochar they mentioned charcoal made under no oxygen. It made me think if you burned then covered it with off the place manure. It would burn off the weed seeds and possibly even chemicals.

Put a thin layer of clay over those animal parts then soak the ground with a strong local fungus tea.

After which a guy would line large round bales, that were sitting on the bales flat end. I would probably line different bales next to each other, such as a corn stalk bale, alfalfa and a switch grass bale.

After you had the bales lined up you would take from the on ranch or farm waste manure pile and cover the bales up.

I’d spray more of that tea on it to stimulate the microbes as well as putting a cover crop seed alfalfa or sainfoin.

Probably all summer, if you got rain (hopefully you get rain), continue topping off the tops of the bales as the manure soaks in. As well as continuing to spray with tea before the rains and after you put new manure on. Keep adding to that positive seed bank cover crop because weeds will be going crazy on top of it.

By the end of the summer I would imagine that the bales internal temp would have cooled down. Whenever them temperatures get cooled off add worms. I’d put all varieties of worms in as long as they wouldn’t have the potential to become invasive.

You’d have to keep adding hay and stuff to it as it consumed it. Keep doing it till you had a great alfalfa patch.

With that base you could start other spots.

I just plan on filling holes on meadows with this method. After the alfalfa has been going for a few years you could mine it, I suppose.

Realistically you could probably (once the worms were going) bury anything in that and it would consume it. As long as whatever went in was inoculated with tea. If you were burying a cow you’d want her 12 feet deep or better I would imagine, the key would be to put a layer of charcoal underneath whatever you buried.

You need the charcoal to absorb any possible run off. This idea goes for producers and feedlots. There should be a layer of charcoal between ground and any manure piles. It would be absorbing and charging that carbon or charcoal.

Possibly those old terra preta soils could of been giant compost or even dumps of organic consumable materials.

Though there are some strange elements to terra preta, such as its apparent ability to regenerate itself from the native soil, but that could be the result of having been cultured with some strains of fungi or bacteria, rather like kefir.

I went back to my terra preta bed a month ago and dug into it to see how the soil looked. We filmed it, but the audio was not working so the video never got posted.

What I found was not encouraging. The soil had not darkened as I had hoped. I may have to grind the next batch of char rather than just smashing it up a bit. It did grow the first round of tomatoes very nicely, but that could have just been due to all the minerals in the ground. The second planting did poorly. I believe the minerals may have partially leached out or been consumed by the tomatoes, plus the bed had been completely invaded by tree roots. Without the trees next to the bed, we may have seen different results. The oak obviously loved the fertility and probably choked out the next plantings.

Joe’s ideas would certainly make the ground rich for a time, but the long-term effects are still unknown. More experimentation is needed!

Also, watch out for hay bales and manure.

Next time I build a terra preta test bed – probably during this fall or winter – I will put it far away from trees!

It’s possible that the original terra preta piles were simply dumping grounds for waste originally, but there was a LOT of material in there, and they kept their fertility far longer than seems reasonable, hence my microbial culture hypothesis. It could be that the cultures there are not in our soils. One thing that could be done would be to use some actual terra preta from one of these sites as a starter for a new batch, via seeding it into a newly created clay/fired pottery/meat and bone scraps/manure burn pit, then to see if it starts to spread and transform the surrounding soil.

It Must Be Fermentation Week…

I have often thought about inoculating with the real terra preta. It is not currently available for import (and probably not sustainably if it was available). But the farmers in South America do dig it up to use on their farms.

I have also thought that the same could be done for any composts and it would be really cool to have a “compost exchange” where everyone trades a little bit of their compost.
Then you would be inoculating compost piles and possibly gaining new and different fungi, bacteria, and microorganisms that were previously not found in your pile.

Yes, I think so too. I actually plan to get dirt from different locations to add to my own soil in the long-term gardens.

I wonder if your terra preta didn’t “work” because it was too short term. It seems that those terra preta areas in SA may have been, as you said, dumping grounds for [biological] waste. For years.