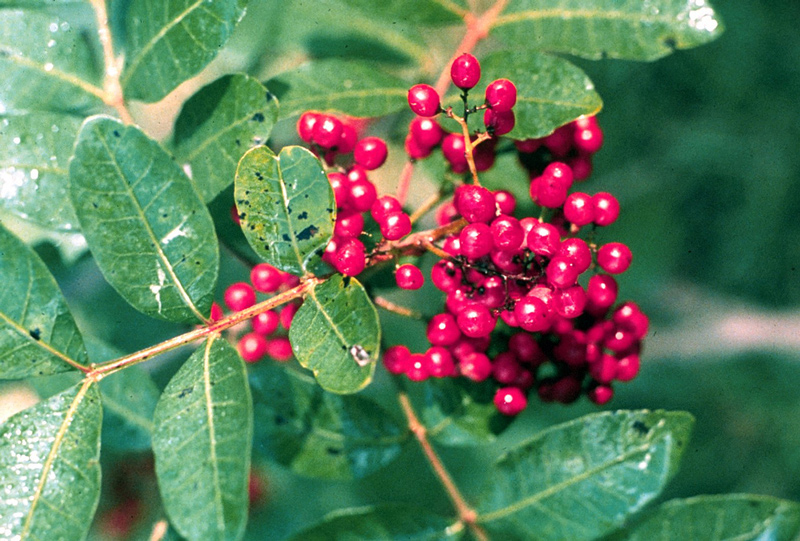 Brazilian pepper composting or use as mulch? Good idea or bad idea?

I have spoken in the past of Brazilian pepper’s usefulness as a “chop and drop” species to cut over and over again and toss as a rough mulch around fruit trees and other perennials.

If it’s going to be a pain-in-the-neck invasive that’s almost impossible to kill… use it to feed the trees you actually want!

Put that regrowth to work and turn it into humus!

Yet… there may be a dark side to Brazilian pepper trees. It’s well-known that they’re toxic, yet they may also be allelopathic.

As Ronald Allan commented on one of my recent videos:

“You mention using (Brazilian Pepper) in chop and drop, but I’ve heard conflicting reports that it can have negative effects on other plants growing. have you had any problems with it?”

No, I haven’t… but there is a rabbit hole worth following here.

So – what’s the deal with using Brazilian pepper in compost and mulch? Good idea or bad idea?

When I was a kid, we had a Brazilian pepper tree show up behind my dad’s shed. Dad cut it back multiple times but it kept coming back. I was impressed by the tree’s tenacity.

Finally, Dad cut it to the ground again and poured gasoline over the entire area.

That finally killed it – yet I never forgot how fast they grow and how good they are at coming back from the ground.

Sometimes problems can be turned into opportunities.

If a tree really wants to grow and if you always need more fodder for the compost pile, why not keep cutting and composting the invasives?

I’ve done this with weeds and grasses, mimosa trees and Brazilian peppers. Chop them into chunks and throw them around other trees to feed the ground.

But This Doesn’t Look Good

That said, there are reports that Brazilian pepper can suppress the growth of other plants. Cindy McNatt writes in The Orange County Register:

“I have to admit that I’m often on information overload. Ideas, plans and promises whiz by so fast that I can only reach out and grab a fraction of what’s coming my way.

And then there was this: an email from Jerri Arriola asking about compost and his Brazilian pepper tree. It caught my eye because I also make speedy compost with these tiny brittle leaves that shower down in wheelbarrowfuls on a quarter of my backyard.

The zinger? He added that Brazilian pepper tree leaves are allelopathic and asked if they were OK.

Time stood still for a moment while I thought about this. You see, “allelopathic” means that this plant suppresses the growth of other plants by exuding oils and other toxic compounds that eliminate competition.

It explains why hardly anything grows under the canopy of these trees – perfect for an area of my driveway where digging weeds would be a drag. Two pepper trees there do the trick to keep it weed-free, although I always thought their deep shade had something to do with it.

As for the large pepper tree in my backyard, I’ll have to say that only the sturdiest plants grow nearby: rhaphiolepis, pittosporum and ivy.

This breakthrough information also explains why I’ve had the worst vegetable garden the past 10 years. Not only is the tree just 10 to 15 feet away, I’ve been composting the leaves like crazy and adding them to my raised beds!”

But is Brazilian Pepper Allelopathic?

I have chopped Brazilian pepper trees up and tossed them into The Great South Florida Food Forest Project without seeing any issues.

That said, the allelopathic effect could have been buffered by the rest of the brush I threw in at the same time. We piled up palm fronds, schefflera leaves, grass clippings and all kinds of things together.

I didn’t notice any problems with the fruit trees after doing so.

However there may be a risk!

According to the Smithsonian Marine Station at Ft. Pierce:

“Allelopathy (chemical inhibition of potential competing species) has long been suspected in S. terebinthifolius, based on the well-documented ability of the leaves, flowers, and fruits to produce or accumulate chemical irritants (Gogue et al. 1974, Morton 1978, Ewel et al. 1982). Morgan and Overholt (2005) demonstrated that aqueous extracts from the leaves of Brazilian peppers could suppress germination and growth of some native Florida plant species under laboratory conditions. Field evidence confirming allalopathy and quantifying its contribution to the competitive success of S. terebinthifolius remain lacking.”

It’s not proven, but there are suspicions.

Brazilian pepper mulch is common in Florida as the trees are regularly shredded as people try to claim back sections of woods from this incredibly invasive species. Even if the mulch isn’t pure Brazilian pepper, if you get tree company mulch in South Florida, the chances are that it will have some Brazilian pepper in it.

Personally, I hate to throw out anything that could be potentially composted.

With the possibility of Brazilian pepper mulch or compost being bad for the garden, well, why not just throw it aside to rot down first? Often allelopathic substances will break down in composting.

Fresher compost is more likely to cause trouble, as will higher concentrations.

Though not performed with Brazilian pepper compost, one test performed at University of California with allelopathic plants reported:

“On the basis of these experiments, it appears that there may be an allelopathic effect on some seedlings when grown in undiluted eucalyptus, black walnut or live oak composts. With increased dilutions, the effects become less severe, suggesting that under natural conditions- where the dilution factor would be far greater than 25 percent-there would be little or no damage from these leaves and that possibly other factors might be the reason for growth failure under these trees.”

My Verdict on Brazilian Pepper Composting

The two factors that are your friends: time and dilution.

I would still use Brazilian pepper as a chop-and-drop tree and compost addition, as well as a mulch, but I might be wary of using it in large quantities.

Nature has a way of breaking down toxins and recycling almost everything into a form plants can use. Brazilian pepper composting is still on the table for me.

As I wrote in my popular book… compost everything!

From the Inbox: Composting in an Apartment
Piles and piles of compost...
Growing Your Own Mulch
Melon Pits!
Short on Soil? Naw, You Got This!

Sprouting Moringa Seeds (No Luck? Maybe You Missed a Step!)

Thank you , as always, for all the useful information and research you provide. This site continues to inspire me and makes my job easier.

I can’t help but notice the leaf structure and the peppercorns are not unlike other leguminous trees and plants. I have wondered this for a long time and now that you are posting about this, I had to ask.

To control some weeds (drives, sidewalks, etc.), would it be possible to grind up and squeeze Brazilian Pepper growth using the juices in a spray application? I wonder how long the effectiveness of such an approach would last.

Now there’s an idea worth testing.

My neighbor has a Brazilian Pepper growing up through some oleander, it always hangs in my yard. It is about time to hack it at the property line, so I will try this great idea and report back.

I’m glad I didn’t add brazilian pepper branches to my hugelkultur. My main concern was the possibility that they might root and I’d have brazilian pepper growing that I couldn’t get rid of without tearing the hugelkultur all the way down to ground zero.

Your comment about the possibility of brazilian pepper in mulch was interesting too. Is it safe to get ANYTHING except what comes from your very own YARD?? I like to get a load of wood mulch from the county a couple of times a year, and I use it in many different ways around the yard and in my veggie garden. Some of the pots that have the wood mulch in them seem to be nonproductive or barely productive. I don’t know if it’s the wood mulch or the yard clippings I got from my neighbor which probably had weed killer in it. What’s the half-life of weed killer, I wonder?

I might have to dump out some of these buckets of dead dirt and start over.

Well add some of the Brazilian Pepper with the Cogongrass and you should have a potent herbicide!

Hi – do Brazillian pepper trees kill grass? (Bahia grass) We are trying to find something to eliminate moles and mole crickets that live underground. They keep digging and killing our grass. We always have to buy more sod, every year. (since 2004) And they still keep digging, everyday day. Thinking about putting brazillian pepper tree branches and leaves, under the new sod. Will it kill the grass? Or do you have other ideas to get rid of the digging creatures? (can they be zapped somehow)

Hey mate. What about laying a mesh of wire netting just under the grass. This stops dogs digging and may stop rodent like diggers.

Reply
Controlling Brazilian Pepper and Gardening in Mims | The Survival Gardener May 24, 2018 - 8:59 am

[…] However, Brazilian pepper may contain growth inhibitors, so using it that way might have drawbacks. […]