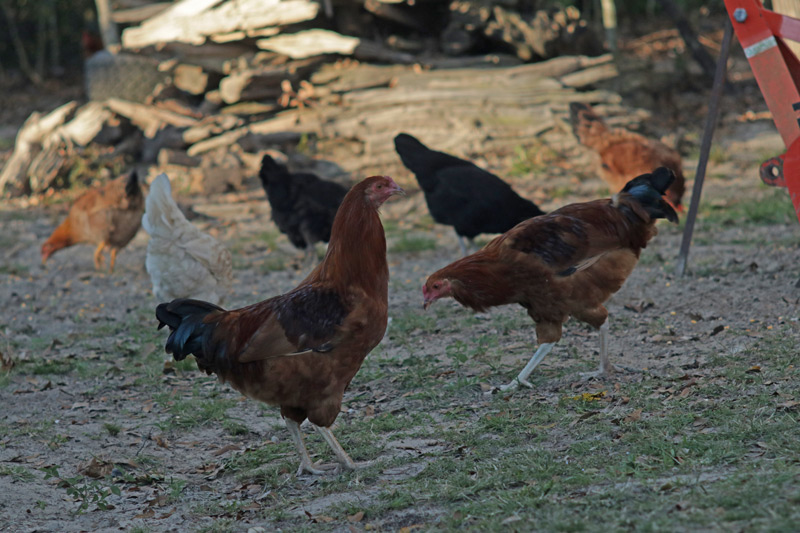 “Every so often someone posts a question asking if chickens can survive solely on free-range/forage. The overwhelming response is generally a resounding “no”, followed by a laundry list of reasons why it shouldn’t be attempted (from not enough forage to increased exposure to predation, etc), which is probably true in most situations.

I am always interested in the threads talking about this because it just seems to me that 100% free-ranging is a species-appropriate life for a chicken, and in my mind, is the gold standard that I should strive for. Adding to that, I geek out on nutrition topics (humans AND animals), so the idea of truly unadulterated meat and eggs makes me swoon.

I just can’t believe that this practice is nothing more than a relic of days gone by, only existing in stories of how our grandparents did it. I’ve been toying with the idea of trying it out for years. I don’t feed my goats or my steer, so…why am I feeding the chickens?

I decided to go for it.

So, back somewhere around May I gathered up 48 eggs from my flock and dusted off the Janoel. I had never attempted a dry hatch/incubation, so I decided to try it out. 38 of the 48 hatched right on time with a 3 day spread from first pip to last out of the shell.

I fed the chicks fermented organic, soy-free, non-gmo layer mash direct from the mill while they were in the brooder phase. (Yes, layer mash. 17% to be exact.) I did not vaccinate them, add anything to the water, or supplement with ‘treats’). Not a single chick had pasty butt, by the way. (That’s because of the fermented feed).

I moved the chicks to an outdoor, open-air brooder when the first adult feathers started showing up. Yes, this is earlier than ‘general wisdom’ says to do so. I kept them on the fermented feed and started pulling up large clumps of grass and weeds and random vegetation from the creek bank, (roots and dirt and rocks included) to put inside the brooder every day. Once over the initial fear of the new ‘thing’ in the brooder, the chicks would attack the clumps of vegetation with gusto. I also did not clean out the outdoor brooder. I left all the grass and dirt refuse in it.

The brooder is a two-story prefab coop marketed for 4-6 adult birds, (but isn’t big enough for one bird to live it’s life in if you ask me). I built a hardware cloth floor for the brooder and put it on wagon tires. It sits outside in the grass and is surrounded by electric poultry netting. My intent was to move the brooder and fence every week or so and keep the youngsters confined within the electric poultry netting.

I started letting the chicks out of the brooder house when they were about 1/2 fuzz and 1/2 feathers. They would stay out all day and return to the coop for the night. What I didn’t realize at first is that some were going right through the poultry netting and out into the wild unknown all day long. When I figured this out, all bets were off and I just started opening the gate in the mornings and closing it at night. The experiment was officially beginning whether I liked it or not.

And that is how it has remained to this day. I never moved the brooder from it’s original location and I don’t even close it. I do close the electric fence. Gotta say that I’m happy to NOT have to pull up and reset a ridiculous amount of electric poultry fencing every week…

Have there been losses? Yes. I lost 3 birds to sour crop early on, which I believe was due to eating overly fibrous grasses.
Do they still return to the brooder? Most do, others just return to the general area. They don’t all choose to roost inside the brooder house. Some roost on top of it. Others roost high up in nearby Oak trees. Two hens and a roo seem to prefer roosting on my lawnmower.

All but one hen and 4 roosters have figured out that flying over the fence every morning is preferable to waiting on me to go open the gate for them. Half the flock hauls butt into the forest and the other half head off to the creek first thing every day, even before daylight (I only know this because I can hear the roosters). I rarely see them at all until dusk rolls around and they start heading back to the brooder house.

An armadillo and a possum have decided to make homes inside the poultry fencing. The possum routinely steals the nest box bedding, which is fine because the hens won’t use the nest boxes. A few will lay eggs inside the brooder house. Two lay eggs on my front deck. One lays an egg in the doghouse that my elderly cat stays in during the winter. The rest of them lay eggs in the woods. None of the birds seem to mind the armadillo and possum hanging around.

Are the birds skinny? Malnourished? Bony? No, No, and No. They are all of comparable size to my other flock that free ranges during the day and is given 16% layer pellets every evening after returning to the barn.

Do I give them any food at all? Sure. I throw their eggshells outside after breakfast. If any birds are still around the house they will immediately come and eat them. I also throw out the meat and bones leftover from making chicken bone broth. They eat every scrap of it. I occasionally throw out wilty fruit/vegetables or stale bread ends (homemade). I do this mostly because I’m lazy and it’s easier to throw this stuff off the back deck than it is to have it stinking up the kitchen trash can. If the chickens don’t eat it, possums and raccoons will. Either is fine with me. Point being that I throw stuff to them on occasion, but in insignificant amounts. The eggs are smaller than those from my older barn flock, but they are the same in regards to having thick shells and membranes. Unless you hit a rock, the eggs bounce when you throw them on the ground!”

I talked more about the quest for a more resilient no-care chicken in last night’s Goodstream:

It is quite an interesting topic. Right now I have some eggs incubating which are crosses between Production Red roosters and Brown Leghorns, Black Australorps and California Whites. We butchered our two Production Red roosters on Sunday evening, but their genetics will persist. Incidentally, they’ve been replaced with game roosters. The chicks from those crosses will be interesting to see!

Paul Gautschi of Back to Eden talks about...

Glad to see the experiment is showing promising results.

Happy to see this mirrors my chicken experiences this year! My birds almost never touch the food they always have available (the dog though…sneaky lil pup) and the eggs are always nice. I’m going to figure out exactly how the one hen gets 40 foot into the cherry tree. She just magically appears, but all the others roost in their open air coop all on their own.

“The rest of them lay eggs in the woods.”
It seems that this could make it challenging to find the eggs each day, unless they are always laying in the same spot in the woods.

Thanks, great write up. You see in old movies like westerns chickens just wandering around dodging wagons etc. I think that is how they’re supposed to live!

I have thought a lot about this topic. I have a flock of Icelandic chickens, and they are a great homestead bird. I think they are worth considering in your quest for a better homestead chicken. They are an old landrace from Iceland and are relative newcomers to the U.S. Unlike most modern production breeds, they still retain a lot of “wild” instincts. Instead of being bred for specific appearance standards or maximum egg production, they were chosen for more utilitarian purposes (Jack of all trades, master of none). Consequently they look like a mish-mash of barnyard mixes. They are active foragers, alert and predator savvy, hardy/healthy, regularly go broody and are great mothers, like to roost high in the trees, good egg producers (not champion layers, but good enough), and produce smaller carcasses yielding delicious meat. You won’t find them at the top of the list for absolute egg production, carcass size, or any other metric most people push for in modern chicken breeds, but they do a lot of different things well. That makes them valuable to me as my livestock philosophy is that our animals should be tough, scrappy, and as self-sufficient as possible (even if that comes at the expense of absolute production metrics) rather than being the biggest/best/most productive animal that needs to be babied with feed, medications, etc.. I haven’t quite pushed them that far with no supplemental feed, but I believe they’d do ok, especially in warmer months and if you gave them enough space or varied habitat.

Do you have a source for your gamebird roosters?

I’ve been eyeing gamebirds in my area while waiting to see how your do. I’ve been thinking of letting guinea fowl roam the place but now I’m liking the idea of hunting my gamebird dinner in the woods.