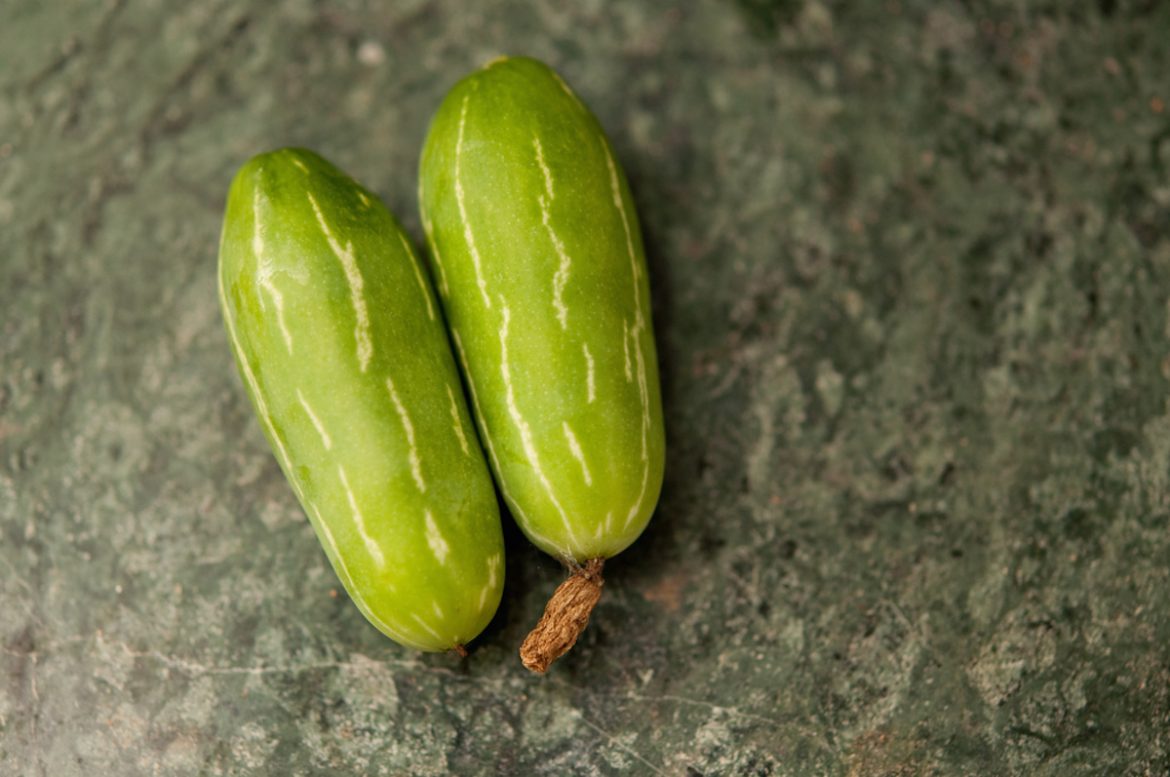 One of the best-tasting and prolific vegetables I’ve had the privilege of trying is the perennial cucumber, also known as the ivy gourd, or most properly as Coccinea grandis.

Apparently, you’re also not allowed to grow it.

Is it just me or is there a conspiracy to make the easiest food crops illegal?

Fortunately, though I don’t have any in my own yard to show off, I did find a patch of it growing behind a gas station somewhere in North Florida:

The flavor of the ivy gourd is delicious. If it wasn’t for having Indian (from India) friends growing up, I would never have discovered this delicious cucumber relative.

They have a tart, almost dill-pickle flavor right off the vine when green – though when they’re red, they’re no longer worth eating.

And get this: they make a fat root beneath the ground that never freezes to death, even up here where I live. Sure as clockwork, I’ve seen those vines pop up on that gas station fence for all the five years I’ve lived in this area.

The ivy gourd is prolific and doesn’t seem to have any real insect problems, unlike it’s annual relatives. Growing cucumbers here is a pain… but these guys are simple, simple, simple. Fortunately, there are sterile varieties that don’t spread. Or, just get a female plant. Without a male they’ll set fruit but there are no seeds to spread into the forests.

Immigrants grow these things all the time… laws or no laws. Hmm…

Why You Should Be Growing Potatoes

I’ll have to keep an eye out for those. Powdery mildew probably doesn’t bother them either.

I would like to try growing them here in the DR.

Will these only grow in warm climates? I am in zone 4. Thanks

Ebay has seeds for sale. How large are these, would they take up too much space in a greenhouse?

They can be kept manageable in size and still be productive.

I just read about this in your book. I’ve seen it on eBay with the warning it can be confiscated and you may get an empty envelope. Not sure if anyone had success ordering. I would like to know. I did run across another location but they have two varieties Tindora Kundrui Conccinia and Tindora Dondakaya Conncinia. The description appears to be right on both… I live in zone 9… somewhere … how do i know it’s the right one?

Good question. The issue is with Indian names vs. Latin vs. other common names. It’s really hard to say. The thing is: once you have it, it’s easy to keep growing. And I know there are non-invasive versions that don’t set viable seeds and therefore can’t invade. Green Deane talks more about the plant here: http://www.eattheweeds.com/coccinia-grandis-cucumbers-versatile-kin-2/ I would assume that if the listings had pictures that look like those fruit, you’d be getting the right thing.

Wrong. They still invade by overtaking native as well as planted landscapes. My neighbor has them and they are coming under the fence and invading my plantings. They are very annoying and hard for me to manage on my side of the fence.

I just got some from Amazon.com today.

Congrats! I hope they grow well for you.

If I planted one of these, hypothetically, next to a moringa that I’m starting from seed at the same time, would the moringa grow fast enough to support the gourd?

Hard to say, though I think the cuke would pull it down before the moringa found its stride.

Thank you for your reply.

Reply
Planting Garden Beds and Potting Up Avocados - The Survival Gardener January 13, 2017 - 6:00 am

[…] the beds: amaranth, sunflowers, black amber cane sorghum and some Seminole pumpkins. I also snuck a perennial cucumber into one […]

[…] are Coccinea grandis vines, AKA perennial cucumber, AKA ivy […]

Found some on ebay….. we’ll see…. I would love to transition to a hardier less problematic cucumber….

In Florida, the University of Florida is no longer listing it as invasive….
https://assessment.ifas.ufl.edu/coccinia-grandis/
This is great news as I wait for my seeds come in the mail.

i actually like the fruit ripe.
i dont see why anyone would say its not worth eating ?
its actually much sweeter and very much softer
( think mushy sweet tomato) and not really fibrous
i might call it a bit stringy, but it melts in your mouth.

you have to pick it right away ripe, it will only last a few days red, and will fall apart
if birds and bugs dont get to it first.

Yeah well, had no luck so far for 2 years trying with seeds.
Getting 10 rooted stalks from a foreign country. **wink** … well India.

And yes, it will grow well in ANY zone in the summer. I am in Zone 7A, when I grow it, I will bring some root stalk indoor during winters.

I’m growing the sterile/female variety, which I got from a grower in FL! In VA, it must be dug and the caudiciform root stored dry, dormant for the winter, before hard frost. Since the fruit are green and somewhat camouflaged, a trellis makes harvest easier. We’re having record rainfall days and flooding. Many crops have failed, but this one has just started setting fruit, Aug. 1, 2018; it was a very small plant, put in the soil June 15. I may try to make some cuttings.

As for red ripe fruit, I had some that had very hard seeds, unpleasant; like eating over ripe cucumber with seeds. There is doubtless much variation. I’ll let some of mine go red, so I can confirm it’s sterile and check out the taste. Maybe the sterile ones, which don’t set viable seed, are better.

I’ve grown this a couple years now (3-4 years). I have several plants in fact. This is my first year of serious fruiting. Few years of green ones, oh wait a red one fell… where did that come from… New shoots I heard could be eaten. I have tried these. Not bad, however I’ve only “tried” them (one at a time)… I would research more. The vines will root at the nodes, so prune it when you don’t want it growing, and keep pruning. But man the green fruit are just bitter, almost astringent. Nothing like a cucumber or a pickle, besides it’s looks. Red fruit are better in my opinion, at least edible but very soft and not a texture I want in my salads. I wanted this for cucumbers but it might just be a famine food for me and the family. I couldn’t find info on different/improved cultivars (if they exist), so I am open to suggestions on how to improve the quality so it can be eaten or any recipe(s) to make the green fruit better.

That is very strange – doesn’t sound like the same fruit to me. I eat the green ones all the time. Very much like a mild, tart cucumber. I’ve never had a bitter one. I’ll bet you have a bad variety, as you said. Where did you find them?

Most cultures cook Coccinea grandis. Mine have been bearing like crazy in the 90+ degree heat and humidity. After picking, promptly rinse the fruit of it’s sticky sap. Once hardened, it’s hard to remove/wash. Since it holds it’s texture well, I fry, then give it a short braise. Last night, I pan fried cubed potatoes until golden, but half cooked (stir less) in peanut oil. Then, add Coccinea fruits, quartered lengthwise and fry until edges change color, stirring both it and potatoes. I added a pulverized Hot Lemon Pickle (Garom Nimboo Ka Achar), 1/4 cup water, mix well and cover pan. Braise about 5-8 minutes. It was delicious! I make lots of the hot lemon pickle, which won’t be in anyone’s pantry, but I’m sure Curry powder, Garam Masala, or maybe some Old Bay might work. The point is the Coccinea stays a little crunchy through all this. I bet it’ll make good pickles.

I tried the red/ripe fruit on mine. Seed seems sterile (no endosperm). But, seed coat is tough; I prefer the young ones, but cooked.

Melothria scabra, Mexican Sour Gherkin is a better raw duke substitute. Just don’t make a sweet pickle with that one; they shrivel.

There are two varieties, the bitter one and tasty one. You cannot distinguish from the plant that which type it will be. You can identify it only after tasting the fruits.

eBay. I don’t doubt they’re correct plant. Everything you write about them is true except taste. Gotta try and source from a new location. Kinda hard with me living Cough-fl-Cough. Any recommendations? I am hopeful I’ll find one that works… if not we’ll try and try again. Hey, I’ve found just about if not 100% of all items in your Totally Crazy Easy FL Gardening and all within a short period of time too. Not growing them all, but a good bit I am. Thank you for doing the hard work of trial and error.

Good work, Robert. Try your local Indian-owned gas station. That’s where I got my Coccinea grandis.

I became interested in these a few years ago from one of David’s videos. I searched for a long time before finally finding a seller out of Thailand on eBay. I bought seeds from him and planted two to hopefully get one that fruited. These plants are now monsters with thick trunk like vines. They flower very profusely but only produce the tiniest fruit which falls off with the bloom. Honestly the thing is becoming a pain since I have to constantly prune the beast and get no fruits. Well, maybe I’ll try cooking the stuff as greens since the effort has been otherwise fruitless. 😉

Capturbo, if you’re in the USA, you can search out our business name, Botanique, to find my email. We sell Pitcher Plants (hint). I won’t list email here due to spambots. I may be able to get you plants of the all-female, sterile clone which fruits without viable seeds. It’s a little smaller than the commercial “Finger Gourds”, but is less invasive. If you keep the vines off the soil, they won’t spread by rooting along the surface. I use a trellis. The pickles I made in 2018 were very good.

I must not be a good “searcher”. Are you in VA?

I found it and have sent an email. Thanks.

[…] JP is right about the blooms disqualifying it as a Coccinea grandis. […]