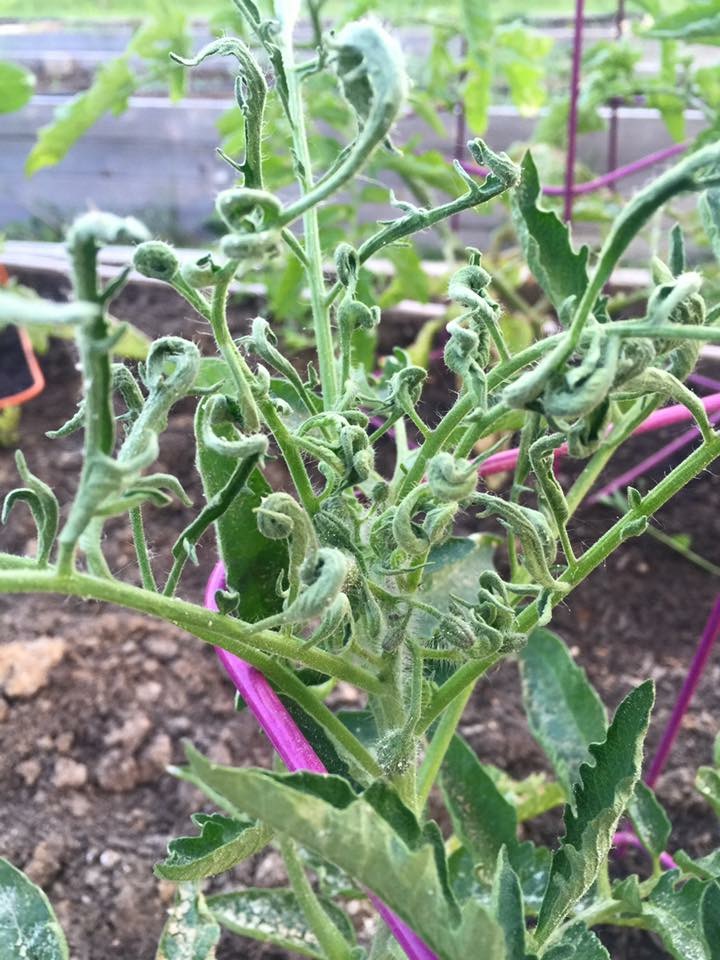 Michael recently left me a heartbreaking comment on one of my previous posts about Grazon contamination in manure:

“We have about 80 acres in pasture. Four years ago our co op started a spraying program. Having horses grazon was recommended. I was told it was safe for the horses to stay in the pasture while it was sprayed and even ok for the horses to eat while still wet. I was never told not to compost the manure. Two years ago I started composting manure out of the pasture, this year I started giving it to friends. What a ***** mess. I spent a lot of time with a shovel collecting the manure, turning it, and delivering it to friends. I’ve had two contact me about their gardens and problems they’re having. One of them asked if we were using grazon. This is going to cost me a great deal of time and money to fix. Some are small raised gardens and I’m going to go in and remove and replace the soil. Some are larger, up to an acre, I don’t know what we’re going to do. I’m open to all suggestions. Thanks.”

Aminopyralids are bad news, yet a lot of people don’t know how bad they are yet. People need to recognize the problem.

Recognize Grazon is a Serious Problem

People are still disbelieving on this topic. Look at some of the comments on this video:

No, it’s NOT that the manure is too hot or not composted enough. Stop blaming the gardener. A lot of farmers and gardeners have been growing with manure for years and never had anything like this happen. I know what too much nitrogen looks like, as does pretty much every person I’ve met who has been hit with a Grazon kill in their beds.

It’s a serious, persistent, long-term herbicide that is taken up in plant material and can be consumed by animals, passed through in their manure, then still be toxic to gardens even after months or possibly years of composting.

It is evil. It is nasty. It is here and if you put manure on your gardens without knowing 100% that it’s not contaminated with this crap, you are running a very high risk of losing your plants.

If you think you have been hit with Grazon, look at the leaves. If they look weirdly twisted and curled and you’ve applied manure, straw or hay at some point, it’s probably Grazon. The plant is often still green and trying to grow, but it will never produce anything. All the new growth twists and thickens as the cell-stacking function is inhibited by the toxin, causing that weird, horrible growth, and tinier and tinier little leaves.

Read Karen Land’s story. It’s another heartbreaker, but you can see what happened when a really good gardener was hit by this stuff.

So – what do you do once you know you’ve been hit?

First of all, remove all the manure you can. Get it out of your garden beds. Scrape it and throw it somewhere at the edge of your property or in an empty lot where it won’t hurt anything else.

Take out the plants that have already been effected and throw them away. Don’t compost them, because that will just add the toxin to your compost. Throw them out or check them where you chuck the manure. After doing all the clean up you can, try adding some crushed charcoal to the beds. Activated charcoal dust would be really good. And throw in compost – NOT aminopyralid-laced compost – when you do, knowing that the charcoal is going to suck a lot of the nutrition out of the soil along with the herbicide. A friend of mine had some of her tomatoes live through Grazon-contaminated manure thanks to the ashes and charcoal she had planted them in. The ones which got the manure without the charcoal were destroyed.

Another option is to plant members of the grass family for a couple of seasons. They are not affected by the toxin as it’s targeted at broad-leaf plants, not grasses. You can plant corn and grains and they’ll produce. Again, though, don’t compost the stalks.

The final thing I would say on this is: complain! Tell everyone about this garbage. It should be illegal, as it’s doing untold destruction to gardens and farms across the country. There is no responsible way to use this poison. It needs to be done away with. Vermont has already pulled the trigger. The rest of the nation should follow.

I have a lot more on Grazon and avoiding it in my book Compost Everything: The Good Guide to Extreme Composting. Don’t get hit!

Do we know if this stuff is toxic to people? My mother lost her last garden (a few years ago: she only has potted plants now) to aminopyralids, via a truckload of contaminated mushroom compost. Turns out mushroom compost is made from… cow manure. And cows eat grass and hay. And whoever grew the grass and hay was using… aminopyralids. That’s an awfully long chain of contamination. I don’t think you could even *begin* to trace the source. Which sort of begs the question: is *any* garden amendment safe to use without interviewing the entire supply chain first? Mushroom compost used to be the be-all and end-all of garden amendments in our area. Now it’s just the end-all I guess. Are the mushrooms safe to eat?

All good questions – and I don’t have the answer. I’ve wondered the same things.

I had NEVER heard of this nasty chemical before!!! I believe GRAZON is the devil! It has caused me many hours of trouble this summer already! We built two raised bed gardens this year, brought dirt in, got some cow manure compost, mixed it all together, and planted some plants in the beds. The plants were beautiful for about two days….then the leaves started CURLING. My boyfriend told me that I was watering too much, so I didn’t water for several days….. but we found out it was something completely different. I searched on the internet and found the culprit! G-R-A-Z-O-N. So I have emptied both raised bed gardens, rinsed the wood, put plastic down, added new dirt and replanted plants (a little late in the season). THIS HAS BEEN A BAD NIGHTMARE! Everyone should be made aware of this nasty chemical, and more states should ban this evil herbicide!?!?!

Yeah that’s heart breaking stuff. I can’t imagine having all my soil contaminated in such a way. All the work, time, money, down the drain.

Last Autumn, before I knew about this, I got a big load of hay for my rabbits and other uses. It seems I was lucky as I’ve seen no such effects in my garden. I’ll certainly be sure to ask about this before buying more, that’s for sure.

Just click “not applicable.” I’ve been trying to get them to drop those ads. Problem is, the ad section really works well for suggesting things I like on other articles. It also makes more more than $50 per month and my readers seem to avoid all the awful stuff they occasionally promote.

Thank you! This is very vindicating. My dad argues that my garden’s curled leaves and stunted growth can’t be the Grazon that he put down like 5 years ago, but it only happens in the beds with composted manure from the barn. Is there any way to get the pesticide to break down faster? I can’t just abandon 100 years of manure in a 1000 square foot barn.

It’s definitely the manure. Grazon is nasty and doesn’t generally break down much unless it’s tilled into the soil, then it still takes a long time.

You could use it to feed grass, grains or your corn – it won’t hurt members of the grass family.

I’m hoping that “organic“ compost, the kind you pay too much for at the garden center, will be ok. I feel bad about encouraging a farm owner to use a spray to eliminate dogbane from horse hayfields 15 y ago. (The horses were starving despite being well fed volume wise.) My gardens fail to thrive since using a brand of compost from a local farm. This year i got a HUGE amount of grasses. NOW I KNOW! only a few raised beds and large containers.

Is there some way of telling if Grazon has been used in the manure before putting it on my garden? We bought a small farm that has a couple massive piles of well composted manure that I’m itching to put on my new garden. I’ve had a run-in with Grazon destroying my greenhouse plants before and do not want it happening again.

You can plant some beans or tomato transplants in it and wait. I would try it on different parts of the pile, though, as some manure may be contaminated and some may not.

my gardens were meagerly productive for the last ten? years. ive found a source of organic chicken manure and will use that this year. I fear the dairy compost i used was contaminated.

Could you please encourage people to sign this petition:

Wow ! What an article. I try to garden organic and use some bagged manure from Lowes and Home Depot. I hope it isn’t laced with this Grazon. Black Cow is the name of the manure. Just dumped a few bags on my asparagus bed. Keeping my fingers crossed.

I had this happen in new raised beds I had put goat manure, classic symptoms for tomatoes, eggplant, peppers, but did not affect summer squash and cucumbers. Some of the tomatoes eggplant and peppers after a time seem to have recovered and are bearing fruit that looks normal, maybe because the goat manure was mixed irregularly into the bed. Extension agent told me to try cover crops and that it could work it’s way out after awhile and suggested bio asset with beans or peas for any new compost/manure.