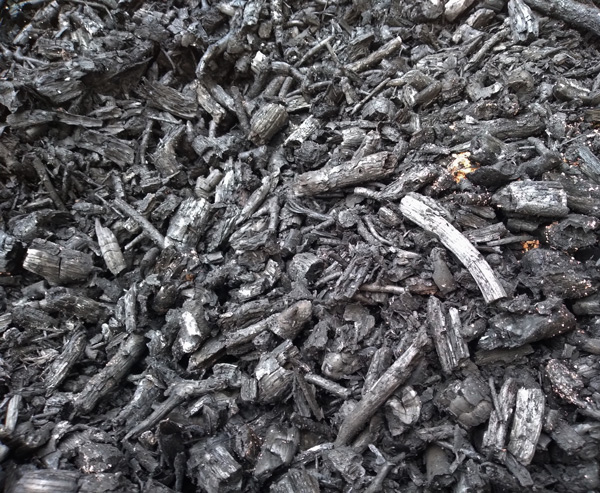 I took down a big tree in the middle of the garden area and cut it into pieces this last weekend – which was a perfect excuse to do another biochar burn.

Because I had a lot of irregular wood, I used a trench burning method like what Steven Edholm does. I’ve done multiple burns like this and it has worked great, giving me good yields for little time investment. It also works wonderfully on green material as the fire gets raging hot.

I filmed it so you can see what we do:

Here’s a step-by-step on how I do a biochar trench burn.

When you burn biochar in the ground in a big trench, it allows you to quickly convert long, irregular branches into biochar without having to spend a lot of time chopping them up or trying to arrange things nicely.

I make no claims to being an expert on making biochar and I am still learning and tweaking as I go along, but this is the current process, which yields 60-80 gallons per burn in just a couple of hours.

Dig a trench maybe a couple feet deep and a couple feet wide and as long as is reasonable. Ours is about 7′ long, I’d say, but I’m not going to bother going outside and measuring it. It’s a rough thing. If you have a lot of sticks to burn, make it as big as you like.

Make sure you have a good pile of branches to burn before you light your fire. Also, rake up some leaves for Step 3.

Step 3: Load the Trench With Leaves

Leaves and/or pine needles are a great way to light up a a fire. I throw a bunch of dry leaves down into the trench, then throw some small sticks and dry rotten material on top of them.

Light both ends of the leaves. Once they start blazing, load sticks on top. Thicker branches have not worked as well for me as branches that are 2″ or less in diameter.

As the flames rise and blacken the first layer and start making it into embers, throw more wood on top. Keep doing this, layer after layer. If you load too fast you end up with unburned material in the bottom. This happened on my last burn because I loaded too much at the beginning over the leaf layer. We actually had unburned pine needles in the finished biochar because the subsequent layers had choked off the oxygen too much. When you run out of material or the trench is full of charcoals, proceed to Step 6.

When the last layer is turning white around the edges and appears to be mostly coals, bust out the hose and start spraying. It takes a lot of watering to put out a hot trench fire. If you stop too soon, it will reignite and burn to ash, which you do not want! Once the coals seem dead, I shovel them into a metal trashcan and wet them again, just to make sure. Once you have your cooled coals, put them in a large tub or barrel and cover them with a nutrient-rich solution. This could be urine, worm leachate, compost tea, manure tea, a diluted commercial fertilizer solution like Dyna-Gro (which I really like), fish emulsion, rotten stew… whatever.

I also add the occasional tureen of turnip soup:

The idea is to charge the biochar with minerals before you add it to the ground, which keeps it from sucking up all the nutrition in the soil for the first year or so after application.

I am most interested in getting the mineral levels of my biochar up to a high level.

Secondarily, I want it filled with biological life. I figure the latter may arrive on its own, but I don’t mind giving it a head start by throwing some biological materials into my biochar soaking barrels along with the nutrient solutions.

In our fall test bed, I added charged biochar in a half-inch layer over a 5′ x 5′ bed, then turned it under with a spading fork. This took 8 1/3 gallons of biochar. This is about 33 gallons of biochar per hundred square feet of garden bed. That rate grew us some fine-tasting vegetables in our test bed, so we are now adding biochar to our other beds as well.

This is all a big experiment right now, but the taste-test results and the difference in plant growth were impressive in the biochar bed.

I am sold. If I come up with anything new, I will share it here. For now, the biochar trench burning method is my go-to. It is cheap and fast, plus convenient for letting me get rid of long branches and weirdly-shaped material.

Are You Pruning Too Much?