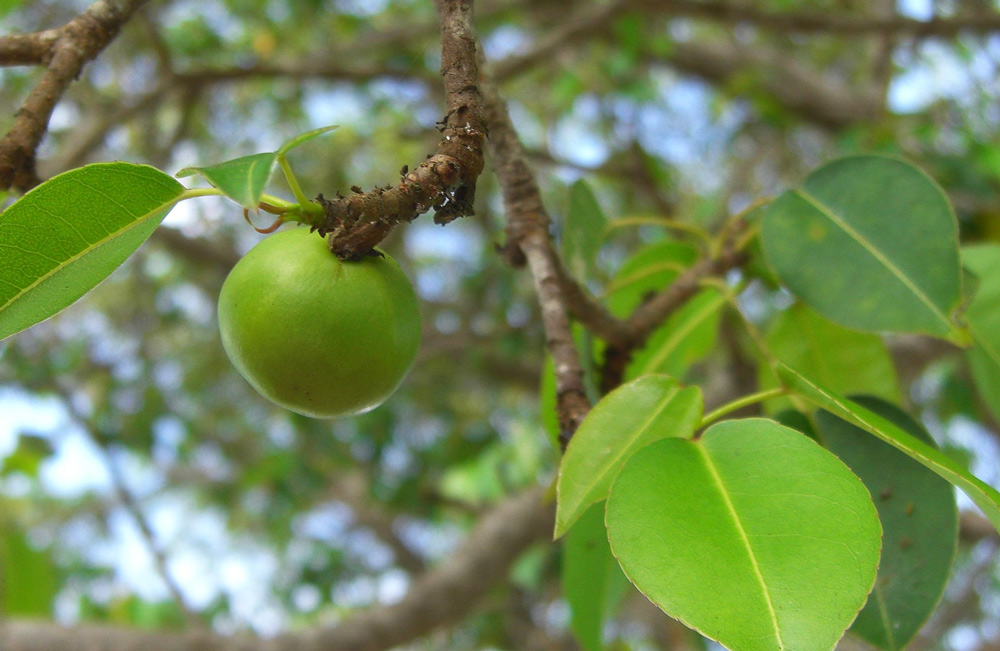 I know I shouldn’t laugh at this woman’s tale, but I did:

“Last year I went on holiday with a non-medical friend to the Caribbean island of Tobago. On the first morning we found one of those idyllic deserted beaches, exactly as described in the brochure: white sand, swaying palms, turquoise sea. While searching for exotic shells and coral fragments, I saw some green fruits among the scattered coconuts and mangoes lying on the beach. They were round, the size of a tangerine, and had apparently fallen from a large tree with a silvery bole and oblique based leaves.

I rashly took a bite from this fruit and found it pleasantly sweet. My friend also partook (at my suggestion). Moments later we noticed a strange peppery feeling in our mouths, which gradually progressed to a burning, tearing sensation and tightness of the throat. The symptoms worsened over a couple of hours until we could barely swallow solid food because of the excruciating pain and the feeling of a huge obstructing pharyngeal lump. Sadly, the pain was exacerbated by most alcoholic beverages, although mildly appeased by pina coladas, but more so by milk alone.”

Manchineel trees are one of the nastiest plants on the planet.

They are straight out of The Twilight Zone.

Often plant foragers (myself included) become blasé about the dangers inherent in the plant world.

We’ll take a nip of something here and a taste there, forgetting that some flora defend themselves quite astoundingly from incautious grazers.

This woman was lucky to survive her encounter with manchineel.

Have a wonderful Lord’s Day and remember not to nibble plants without a good guide book. Or paid up life insurance.

“Lord, who may abide in Your tabernacle?
Who may dwell in Your holy hill?

He who walks uprightly,
And works righteousness,
And speaks the truth in his heart;
He who does not backbite with his tongue,
Nor does evil to his neighbor,
Nor does he take up a reproach against his friend;
In whose eyes a vile person is despised,
But he honors those who fear the Lord;
He who swears to his own hurt and does not change;
He who does not put out his money at usury,
Nor does he take a bribe against the innocent.

He who does these things shall never be moved.”

*Image at top by Jason Hollinger. CC license. The man has taken some amazing photos – I recommend checking out his Flickr page.