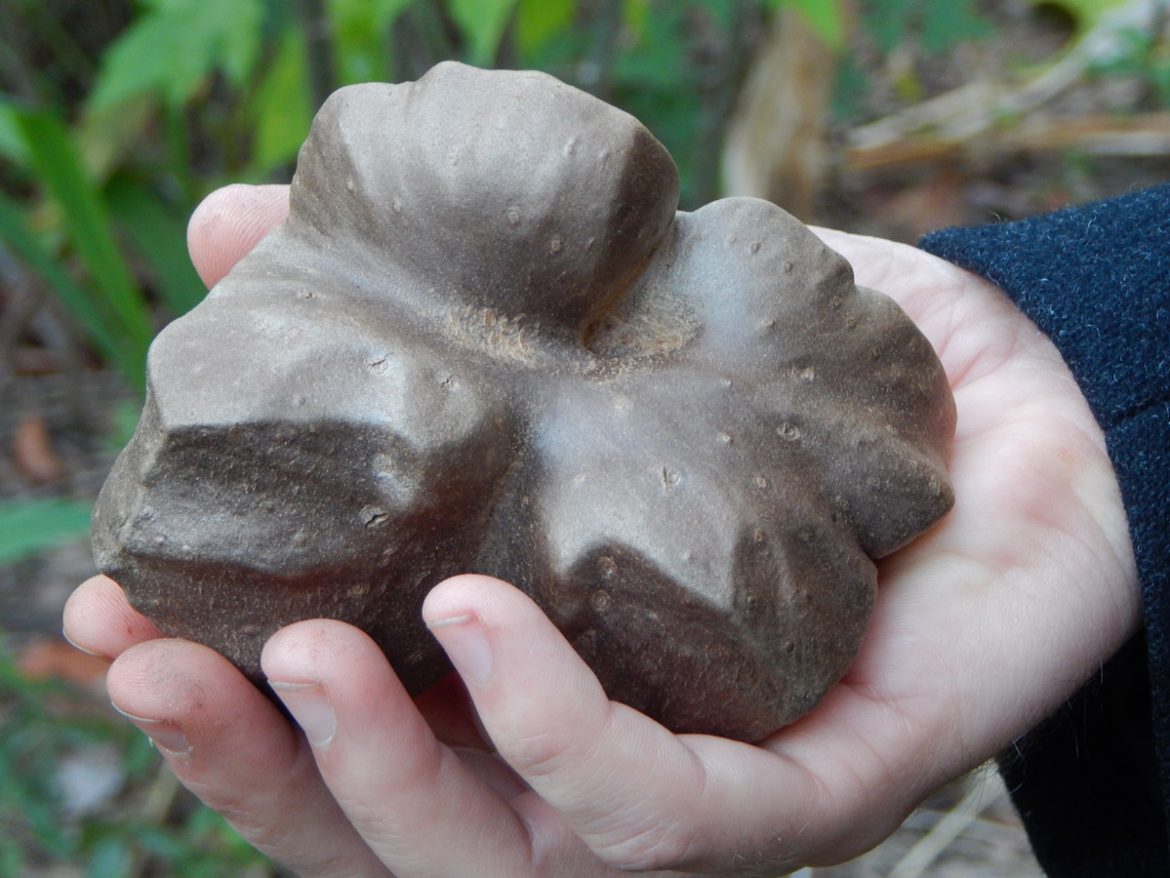 I’ve written multiple times on edible vs. non-edible air potatoes but what I haven’t covered much is the edible Dioscorea bulbifera.

Dioscorea bulbifera is the common wild variety of air potato that will mess you up if you eat it.

To make things complicated, however, there are some edible cultivars – though they’re very rare. As a crop, they have awesome potential. Imagine a staple root you don’t have to dig up!

I was given one – check it out: Looks different from the wild ones, doesn’t it? The shape is quite sculptural. The edible Dioscorea bulbifera bulbils look like a Gaudi sculpture. The wild, toxic Dioscorea bulbifera bulbils look like this: Those contain high levels of diosgenin, and that will mess you up.

Here, check out my new video on the edible Dioscorea bulbifera:

Seriously – isn’t that the coolest thing ever?

A Potential Staple Crop Cast Aside

Unfortunately, the air potato beetles released by UF eat the edible Dioscorea bulbifera so the era of this potentially being the perfect easy-to-grow staple “root” crop are already over before they had a chance to begin.

They are about the prettiest thing I’ve ever seen: Wish they were as easy to grow as they were before the beetles were released.

Dioscorea bulbifera is potential staple root crop that could be harvested without digging, and its potential has already been wrecked by the government’s deliberate release of an insect pest.

Look – when something grows SO GREAT as to be an invasive, why not figure out HOW TO USE IT?

Yes, the wild air potato vines are a pain-in-the-neck. They grow on their own with no care and have spread all over the state.

But, if instead of releasing a pest to kill the wild menace, UF decided to work on growing edible Dioscorea bulbifera cultivars, they could have given the state an incredible new staple crop!

No. Instead they decided to release a voracious pest that will render future cultivation of edible air potatoes difficult at best.

I really don’t understand the way these researchers think.

My goal has always been to grow the most amount of food for the least amount of work. When you have something that’s potentially a great edible crop or has excellent uses, why not just take the cards you’ve been dealt and press towards utilizing that “pest?”

Dioscorea bulbifera could have been the next Idaho potato.

Instead, it’s a “noxious weed.”

Totally agree the release of the beetle being a bad idea. From what they say so far it will not eat anything else and when all the potato vine is gone they die. We will see…

However if that is the case then in the future after the beetles are gone it should be an awesome crop to grow that’s basically pest free otherwise.

Make me think of other issues we face. Asian carp in the Mississippi river…and they jump for you…huge boats with huge nets scooping them up as they jump right in…then huge facilities process huge amounts of fish fertilizer until we fish them to extinction. Problem solved…and it doesn’t matter if we fished them extinct because they’re invasive. Sigh…

My wife made a good comment this morning on researchers simply diving in where angels fear to tread, rather than looking at Creation as filled with potential that can be stewarded to feed people. I’ll bet those beetles are here for good.

Fish fertilizer idea is a good one!

That is one of coolest things I’ve seen. Do you prepare it like you would normal Dioscorea Alata?

Please please please tell me you are growing this rather than eating it. I’ve been looking for these things for years!

I live in a region that those beetles are never going to reach [Pacific Northwest specifically] and would really like to experiment with these as a novelty crop [and, depending on the results, possibly as a staple.]

Please grow some [surrounded by nets if need-be] and sell me some tubers. I would be eternally grateful.

Since it’s technically “invasive” in the state of Florida, I can’t tell you where it ended up.

Can you connect someone with the guy you got it from?

I’ll bet the beetles are here to stay too. Specialist predators tend to develop a homeostasis with their food source. After all why does the beetle still exist together with the air potato in Asia?

If I were the beetle, I’d stick around. Lots of food, no predators, nice climate…

I just picked up this edible dioscorea bulbifera from Thialand. http://www.ebay.com/itm/301973723589 After seeing your pictures I’m worried this may be the poisonous type. Based on your research what do you think?

It’s very hard for me to say. If you eat some and get an upset stomach, it’s the wrong one; however, there are some very good edible cultivars. I really wish I knew who could run a test for you! Maybe try them on an enemy first?

I’ll have to give you an update after I grow and taste some. Unless eating some sends me to visit my maker! Then maybe we can exchange some Discorea, if you end up in South Florida eventually. I’m in Southwest Florida. I enjoy growing many of the tropical perennial vegetables you grew alongside your home in North Florida. Can’t wait to hear about your Cocoa farm adventure. By the way, what editor do you use for your videos?
P.S. Love the songs!

I edit most of my videos with Final Cut Pro (before it got rewritten) and some of the short ones with iMovie. Final Cut Pro has a ton of options but is not user friendly. iMovie is user friendly but short on options. For the longer films I always use Final Cut.

I am interested in the edible air potato particularly its cultivation and health benefits to human. I have grown up as a child to see it thriving on fences in homes and occasionally eaten. I now really want know how it could be grown on a large scale and possible sources of good varieties. I would be glad if you could assist in that direction.

How can I get the edible dioscorea bulbifera plant? Will it grow in San Diego?

I’m not sure where you’d find it for sure, but it would be worth looking up local permaculture groups on Meetup.com.Plant geeks have ways of finding things. Yes, should grow fine in SD.

I also avail to appreciate you for this excellent work.I know this interesting plant,it can be found growing vigorously in homestead, around april to october.We do harvest bulky of them.I can even admit this delicious food accounts for our immunity.The problem is majority of kenyans have dropped the plant in a forgettable grave