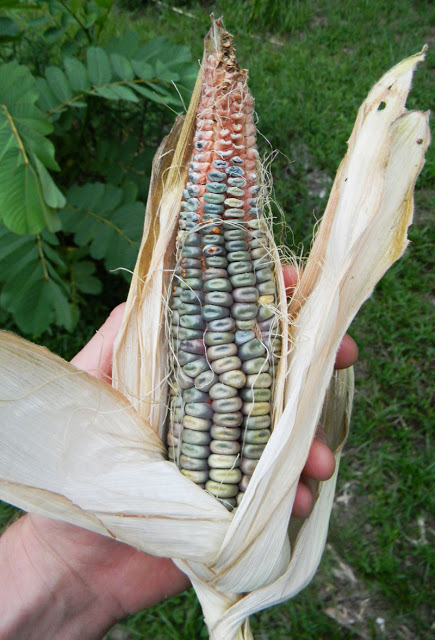 My green dent corn grew quite quickly, though the yield was pretty poor. When I picked this first ripe ear and peeled back the silk, I was amazed. Look at all those colors! A little purple, a little yellow, some blue, some green… and the cob is pale red. Amazing.

The experiment was a success despite a poor harvest, since now I have plenty of seed for next year. I started with only 200 kernels from the USDA (PI 452039) germplasm repository. I’m going to space them further apart next spring and see if they do better. If not, I may mix the breed with Oaxacan green dent, though I don’t think that cultivar is quite as pretty as this one.

Next test: grinding and eating a sample of the grain. I’m hoping they taste as great as they look.

Next season, I’ll plant a much bigger patch and then save seeds from the very best of the lot. Started with such a limited population is not a good practice, particularly for corn. I can’t wait for 2014!

The Broccoli is Done and It Wasn’t Enough

So how did it taste? How did you use it?

Good question! This is a grain corn, meaning it should be good for making flour and grits. I love grits, so I'm planning on roughly grinding it and cooking some.

Our complete yield off this patch was perhaps 1 quart of seed. I'm going to grind a little teeny bit of that to try… I'll post what it tastes like when I get a chance.

We grew Hickory King dent corn in TN and made our own grits from it: they tasted amazing. The corn flavor was rich and pronounced.

No – the yields were quite low so I switched to testing some other types.