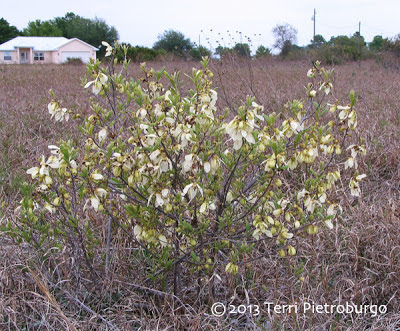 I’ve always been fascinated by rare and exotic fruit trees. For years I wanted to see a Florida native pawpaw tree in the wild but never had any luck – until I went on a foraging trip with Green Deane. He found a teeny little tree by the side of a path and announced “Ah, a pawpaw.” I couldn’t believe it. That little shrub – a pawpaw? Deane assured me it was – and told me that the pawpaws in Florida were often tiny things; not the decent-sized trees we’ve heard about up north.

I started to wonder: how many times had I passed one and been unable to identify a Florida pawpaw because it didn’t fit my expectations? I had the same problem with persimmons. Though I’d walked past a tree in my neighborhood dozens of times, I didn’t see it until my wife pointed it out one day. “Look at that – what kind of fruits are those?” Persimmons! I’d always missed it because the tree was small and tucked into the woods.

Since I’m volunteering for the upcoming Master Gardener Spring Sale here in Marion County, I checked out the list of vendors and saw there was a booth space rented by “Pietro’s PawPaws.” I couldn’t take it. I had to call and find out who this person was and what they were growing. The phone was answered by Terri Pietroburgo, the booth’s renter and the owner of (so far as I know), Florida’s only native PawPaw nursery. After talking to her for a few minutes, I realized she was a gal after my own plant nerdy heart… and I asked if she’d agree to an e-mail interview. She did – and not only that, she provided me with some of her incredible photos of pawpaw tree species from across the state.

Without further ado, I present part one of my interview.

DAVID: Terri – how did you get into growing PawPaws of all things? TERRI: Pawpaws are Florida natives and the host plant for the beautiful zebra swallowtail butterfly. They have beautiful white or purple flowers and edible fruit. I searched for five years for pawpaw plants for our butterfly garden. In 2005 I drove two hours to a nursery and paid $20 each for three pawpaws the size of tooth picks and only one lived because they hadn’t been grown correctly. Then in 2007 we were
driving home from church and I saw a Bigflower Pawpaw blooming on the side of the road. Went home, got my truck, wandered into the woods and found fifty blooming obovata pawpaw. I figured there must be people like me who had looked a long time to find them. So I took it as a sign from God because we found them on the way home from church – and I started a pawpaw nursery.

I have learned a lot about pawpaws as I continue to try and add a new species to my nursery every year. Pawpaws are very hardy plants if they are grown correctly at the start. So I take much care in the way I grow them and the instructions I give out so you can enjoy a great plant and butterflies for a long time. DAVID: I always thought PawPaws were a Northern fruit tree – and even when I lived up there I never had any luck finding them in the wild. If they’re living in Florida – where? And what do they look like?

TERRI: The pawpaw most people have heard of is the Asimina triloba or common pawpaw which is a northern pawpaw. It grows from the Florida line up into Canada. It is a tree that can reach thirty feet or more and is usually found as a understory tree. It has the largest fruit native to North America – but you would be lucky to find one with ripe fruit on it, even if you knew where to look. Pawpaw fruit go from raw to ripe to rotten in about three to five days so the animals usually beat you to
them.
DAVID: That could explain my lack of luck. So… if pawpaws are
living in Florida – where? And what do they look like? TERRI: We have eight species of pawpaws native to Florida. One species is found as an understory tall shrub to small tree in mesic (ed. note: “mesic” means an area of moderate moisture) woodlands, floodplains and coastal dunes. The other seven species range from small shrubs to a small trees and live in flatwoods, scrubs, dunes, pineland and dry woodlands all over the state. They have either white or purple/maroon flowers and all produce an edible fruit. DAVID: Pop quiz: what are the native varieties and their TERRI: Your chances of transplanting a pawpaw are not very
good. It is probably more work than most people want to do for one plant. They have a very long taproot as seen in the picture of the dwarf pawpaw I dug up (left). It only had a foot of growth above the ground and a six foot taproot. They are not happy when their roots are disturbed.

TERRI: They are a member of the custard apple family so the inside is soft just like custard. The Florida pawpaws don’t taste as good as the northern triloba because it has been cultivated to taste certain ways. The Florida pawpaws have a tropical taste that isn’t the same as anything I have eaten. I have tasted six of our eight species and liked them all. Like anything else you pick in the wild sometimes you get one that’s not that good but overall I have liked the taste. My grandson eats them as fast as I can get the seeds out!

wow, look at that root! i'm hoping she will talk about harvesting and propagating via seed in the next episode!

I love these fruits. I had the pleasure of enjoying them when I lived in the mountains of VA. They loved to grow in really moist spots, where creek beds were, but weren't substantial enough to "flow." In some places there were patches and patches of them and crawling through them was like crawling into a neat little fort. They are absolutely delicious.
My grandfather is taking a Paw Paw supplement for his cancer…apparently it's a potent anti-carcinogen, alongside its relative the Graviola/Soursop.

Thanks for listing all the species, and that amazing pic of the taproot !!! (Btw… In the scientific names, Genus is always capitalized , and species is nearly always lowercase. FYI…)

Can I buy pawpaw seed?
Would you send price list
Aqua3715@gmail.com
C.Jeong

You'd have to talk to Terri. Her contact info is in part 2.

I have been given three seedlings and must plant soon…today. not sure which species yet but think I will find a mottled sun/shade spot and be careful to make each hole (the soil is sandy, well drained) deep enough to accommodate the whole root w/o crowding roots. Perhaps in one or two I will add some landfill fine mulch along with sandy soil. Water daily to establish and hope. So glad to have your intro to our native pawpaws. Thanks

You bet. They’re truly wonderful plants – you’ll love having them.

Awesome. I wonder how productive these are as a fruit tree. They sure seem like they have good potential for breeding.

And your Part 2 link is broken.

I have lots of A. parviflora but really eant to grow triloba. Has anyone in central fl tried?

There is a patch of A. triloba growing near Gainesville, so it’s at least possible there.

David I have tried several times to go to part 2. However it continually says not available. PLEASE could you forward Terri’s information to me,,, THANK YOU in advance

I fixed it – thank you, Robin. Will send you an email.

I have these growing all over my pasture. Can’t seem to get rid of them.

That huge tap root is amazing.

Hello, Yes, I have Asimina, perhaps parviflora? I would like to know more of maintenance etc., how to grow from seeds.

I have 3 paw paw plants ( Tribola) I live in Ocala, Fl. Do I need another variety of paw paw to fertilize them?

I live in C. Ohio, have asimina triloba, have seen the netted, 4- petaled ones here. didn’t realize pawpaw’s were down so far south in Palm Beach, Martin county.

Where we can buy seeds of this asimina?
Please somebody with seeds write me i like and exchange. sarcorampuspapa@hotmail.com

Please send me the web address for part two. AND also the street and city address for the pawpaw nursery in Ocala. I have a pawpaw that appeared in my Dunnellon, Florida back yard. Thank you.