This amusingly ranked food recommendation list has been making the rounds lately: 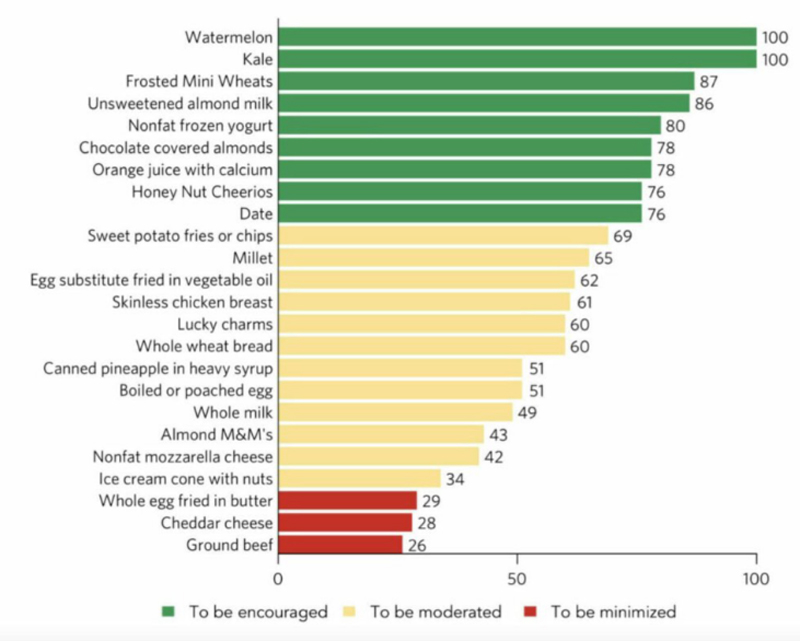 Apparently, certain interests want you to believe this is a good way to make food choices.

“One of the primary achievements boasted by Mozaffarian and Tufts is the development of the “Food Compass” in 2021. It rates thousands of foods and beverages on a scale of 0-100 based on nine nutritional values. While the methodology behind the ratings appears to be objective and comprehensive, some critics have pointed out some odd rankings by the system.

For instance, Reese’s Peanut Butter Cups have a rating of 30, while cooked ground beef has a rating of 26. Chocolate Lucky Charms, the sugary children’s breakfast cereal, has a rating of 69, while a skinless, sauce-less, grilled chicken breast has a rating of 61. An egg fried with cooking spray scores a 41, compared to a school lunch medium-crust pepperoni pizza scoring 48.

In addition to advising government officials and healthcare professionals across the world during his career, and developing the Food Compass, Mozaffarian is funded by the Bill & Melinda Gates Foundation. He has received funding from the foundation for at least four projects totaling at least $6 million, according to his CV.”

That list really is stupid. It’s so bad, I’m wondering if TPTB are gaslighting us again.

There are really only a few actual foods on that list. Let’s weed it out a bit.

Of the remaining foods, here’s how I would rank them from best to worst:

As usual, everything mainstream is upside-down. Follow the money.

Unprocessed foods are much better for human health, unless you feel like supporting your local pharmacist.

Eggs and meat, homegrown vegetables and roots with plenty of fermented foods on the side will serve you much better than the nonsense politicized food lists.

Chickens 101: Feeding Chickens
"There is Death in the Pot!"
Feed a Family of Four for ONE Year for Less than $300
Soybean Oil is the Devil
Homemade Pickles
4 comments
PinterestWhatsappEmail

How to Grow 5 Amazing Tropical Trees from Seed

Are Eggshells in Compost Safe?

Soybean Oil is the Devil

“Don’t eat anything that comes in a box or a bag with a barcode on it” is a good, general rule of thumb for health.

That is good, David.

I’d put millet below sweet potatoes, barely better than whole wheat bread, and whole milk above the fatless, inappropriately raised chicken breast. The mozzarella can stay where it is, but whole fat cheese would be above milk.

Yes. The big problem is that even the “good” foods on this list all need caveats.