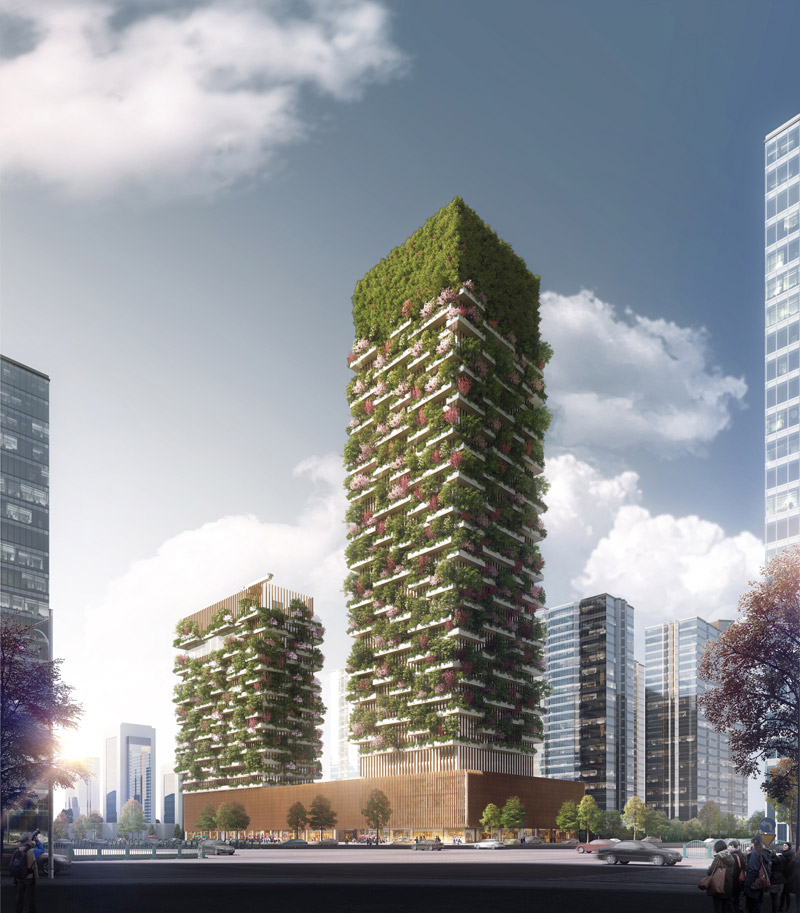 These forest buildings were built to reduce pollution and produce clean oxygen for the city: “China has pollution problems, and one Italian architect could have some answers.

The Chinese city of Nanjing is getting a Vertical Forest, a set of two buildings stylised with around 1,100 trees and a combination of over 2,500 shrubs and plants.

But it’s not all about how it looks: The Nanjing Towers will absorb enough carbon dioxide to make around 132 pounds (60 kilograms) of oxygen every day, an official press release claimed. China’s Vertical Forest is scheduled to be completed sometime next year.

At the time of writing, Nanjing has an air-quality index of 167, which categorises it as “unhealthy.” For reference, Sydney and New York both have “moderate” indexes of around 60, while London sits at about 100, teetering between “moderate” and “unhealthy.”

It’ll be the third city to get a Vertical Forest, following ones built in Milan, Italy and Lausanne, Switzerland.”

There is a video included with the article which you can see here:

There’s another video which shows more of the features of these verdant verticals here:

The towers are powered (I assume in part, not completely) by air and solar and the forest portions are allegedly watered by greywater.

“Vertical Forest is a model for a sustainable residential building, a project for metropolitan reforestation that contributes to the regeneration of the environment and urban biodiversity without the implication of expanding the city upon the territory. It is a model of vertical densification of nature within the city that operates in relation to policies for reforestation and naturalization of large urban and metropolitan borders. The first example of the Vertical Forest composed of two residential towers of 110 and 76 m height, was realized in the centre of Milan, on the edge of the Isola neighbourhood, and hosts 900 trees (each measuring 3, 6 or 9 meters) and over 20.000 plants from a wide range of shrubs and floral plants distributed in relation to the façade’s position towards the sun. On flat land, each Vertical Forest equals, in amount of trees, an area of 7000 m2 of forest. In terms of urban densification the equivalent of an area of single family dwellings of nearly 75.000 m2. The vegetal system of the Vertical Forest aids in the construction of a microclimate, produces humidity, absorbs CO2 and dust particles and produces oxygen.

Biological habitats Vertical Forest increases biodiversity. It helps to set up an urban ecosystem where different kinds of vegetation create a vertical environment which can also be colonised by birds and insects, and thus becomes both a magnet for and a symbol of the spontaneous recolonisation of the city by vegetation and by animal life. The creation of a number of Vertical Forests in the city will be able to create a network of environmental corridors which will give life to the main parks in the city, bringing the green space of avenues and gardens and connecting various spaces of spontaneous vegetation growth.

Mitigations Vertical Forest helps to build a micro-climate and to filter dust particles which are present in the urban environment. The diversity of the plants helps to create humidity, and absorb CO2 and dust, produces oxygen, protects people and houses from the suns rays and from acoustic pollution.”

I like the idea of forest buildings. I imagine you could really “push the zone” on the south-facing wall of a building like this, as they would be located inside the heat sink of surrounding urban development.

The next step would be to grow edible plants and trees, though you’d have to be careful about avocados falling 500 feet and turning some sidewalk stroller’s brains into guacamole.

I love my rebar

BACK ON THE YAM TRAIN