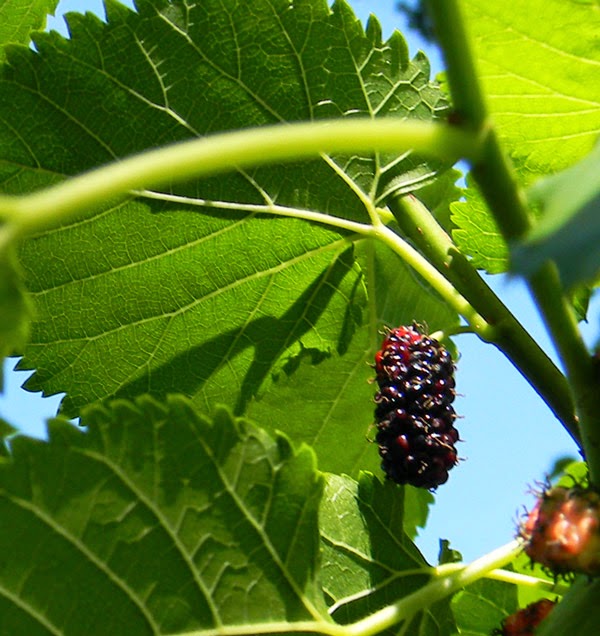 My sister just bought two mulberry trees for her yard. An Illinois Everbearing and a Silk Hope. Though I have grown the former, I was not familiar with the latter, so I looked it up.

The first site I came across was a North Carolina State Extension page, which states:

“Morus rubra ‘Silk Hope’, commonly called Silk Hope red mulberry is a native tree species and has both edible and ornamental features. It is a hybrid between red mulberry and white mulberry. It can live up to 125 years but the weedy invasive character is not appealing. It is more cold hardy than black mulberry.”

What a terrible description of a productive and edible tree. Never mind the fact that if this tree is a hybrid between the native Red and the introduced white then it isn’t actually a true native – this write-up is a travesty and really highlights how anti-edible our mainstream gardening has become.

Contrast this write-up to the one found on the website of Peaceful Heritage Nursery in Kentucky:

“Excellent quality, large mulberries ripen for a long season, up to several months!  Silk Hope mulberry is similar to Illinois Everbearing in flavor, appearance, and fruiting habit. A J Bullard, a North Carolina fruit enthusiast, found the original tree in Silk Hope, NC. An excellent choice for the South because it is not as prone to getting popcorn disease, which is a fungal disease mulberries can get in the South.  Reports say it is very resistant.”

That’s much better. Mulberries are an excellent fruit tree and well-worth growing. But it’s not just the extension offices that are anti-fruit tree. I’ve heard multiple people complain about how “messy” a pear tree is, or how “awful” mulberries stain or how they just “get way too many fruit.”

That’s food, idiots. Eat some, preserve some, give the rest away.

Here’s another example of this type of normie thinking. A few years ago I recorded an interview with my friend Eddy in South Florida:

He grew amazing gardens with lots of tropical fruit in his tiny backyard.

When I visited his neighborhood a few weeks ago, he had sold his house to a new owner – who had cut down multiple fruit trees, including his productive soursop tree, replacing it instead with a little crummy storage shed.

Talk about stupid! They could sell the leaves and fruit from that soursop for good money. I get repeated requests when I write about the species. Like this comment on YouTube:

But no. Let’s just cut it down and put in a junky little storage shed instead.

I wrote about a similar situation with a lovely persimmon tree half a decade ago.

Listen… if you’re growing your own food and planting trees for the future, you’re the smart one. Not the people at extension offices or in your neighborhood who whine about “messy trees.”

The consensus is consistently wrong. And most people are idiots.

Reasons NOT to start fruit trees from seeds (and why they're dumb)
Inoculating Trees Grown from Seed?
8 Ways to Use Fallen Trees after a Hurricane
How Long Does a Pawpaw Tree Take to Produce Fruit from Seed?
Chinaberry Tree Uses

Come on now, tell us how you really feel about it. 😉 I have an only slightly related question. I just bought two bare root pawpaw trees off etsy. Soaked the roots and planted them in some good soil. I would love to buy more at the prices offered by the seller. What do you think the chances are of these trees doing well? I’ve only had them in pots for about a week.

Hard to say. Pawpaws often don’t transplant well. If they are cheap, I would give it a go, just knowing I might lose all I put into it.

I have grown them from seed purchased on ebay. Right now I have some stratifying in my fridge.

So I just got my pawpaw seeds in! They’re supposed to be already stratified. Do you suggest scarifying them at all? The seller also said not to put them in pots if I’m inexperienced. I’m not sure what he means by “inexperienced grower” but I’ve never grown pawpaws before!

If already stratified, you can plant them in deeeeep pots, or right in the ground where you want them to grow. Pawpaws do not like transplanting.

Thanks! Will see if I can find some deep seedling pots!

Just watching your video where you’re talking about planting pawpaw seeds! Bought another bare root pawpaw last week from a local nursery. It’s such a tiny tree I’ll bet it’s not over a year old. Found some stratified pawpaw seeds on etsy. Going to give them a try too. Thanks!!