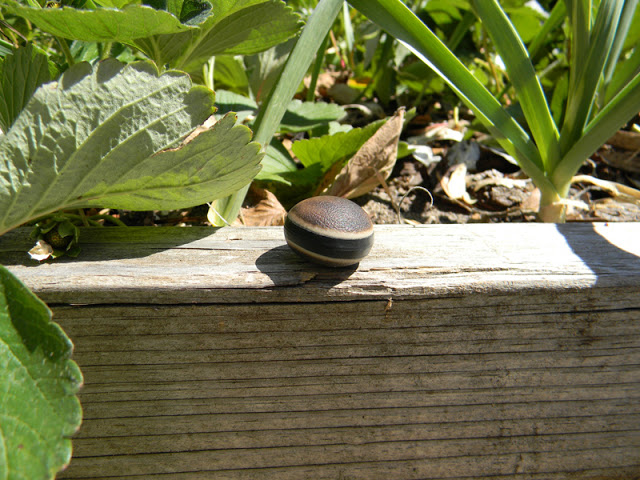 I know many people collect them, but have you ever thought about sprouting sea beans?

Here’s a new shot of the hamburger bean (Mucuna urens) I showed you in my previous post on drift seeds: And now here it is a week after I sawed a notch in it with a pocket knife, soaked it for a day or two, then put it in moist peat moss and vermiculite: See the little root peeking out? And how weirdly black and swollen the bean looks? That sucker took on a lot of water (and piercing its seed coat was no easy feat). I replanted the bean after the above picture and let it alone for a few more days… until a shoot rapidly emerged from the ground. And I do mean rapidly! It grew about 12″ in a couple of days and started rotating around in a circle looking for something to grasp. It moved so fast that my wife and I sat on the porch and watched it make an entire rotation in about an hour. I stuck a little pole in for it to grab… which it did – and twisted itself completely tight to it within another hour’s time.

From what I read, this particular bean grows many tens of feet into the air… reaching the top of tall trees… so I have no idea how I’ll be able to keep it contained. I’d like to raise it to a point where it bears beans of its own, but that will mean protecting it from frosts this coming winter.

Here it is now: Mucuna urens is a close relative of the velvet beans (Mucuna pruriens) I’ve been growing but it’s apparently even more tropical. Who would’ve thought you could find a bean on the beach and grow it? I picked these things up dozens of times without ever thinking about germinating one. There’s a first time for everything, I suppose. And even if this doesn’t do anything for my “survival gardener” cred, it’s at the very least a rather satisfying experiment.

For more on drift seeds, check out www.seabean.com.

wow, i am so impressed with that bean!

ok, more specific question about seed starting – My one blueberry bush has about 7 berries (it's in the shade, fertilized by pee-ponics (not mine!))… assuming i can get those berries when they are ripe before the tree sharks do, how do i grow the berries into new bushes? i don't think i have ever even seen a blueberry seed before. maybe plant the whole berry and hope for the best? or ferment it??

Unless you're looking for genetic diversity, it's much easier to grow blueberries from cuttings than from seed. The seeds are itty-bitty things inside the berries. Here's a link on growing them I found recently:

I believe stratification is necessary. In that article, they're using frozen blueberries.

Cuttings will produce a lot faster, though. Simply take some small hardwood cuttings, dip 'em in rooting hormone and stick them in potting soil in pots on a windowsill. Rubber-band ziplock bags over the top of the pots to keep the humidity in. The little tents make a huge difference in your strike rate. I get about 80% success this way. They root in just over a month or so. I did a handful last year and planted them out in fall – they're about 12" tall now and doing great.

sweet, i will try stratifying. yes, i'm also interested in the diversity. maybe will try cuttings later, if the tree sharks do get the berries!

if you don't know the answer, i won't think any less of your plant nerdiness. you want one to try out?

That's the rosary pea. I actually have a few in a little box with a skull drawn on top. One of the most poisonous plants.

I left a reply at permies for you… those are lovely little killers.

I have had several sprout the latest took a good while. I had the beans in my barn in a soil medium and it would dry out sit for a month or 2 then I’d water it and repeat. When I got a green house recently it didn’t take long. I hardened it and it’s in half shade.

Nice work! Send pictures if you get a chance.