Home Crops Get in Shape this New Year with YAMFIT!
CropsJokesYams 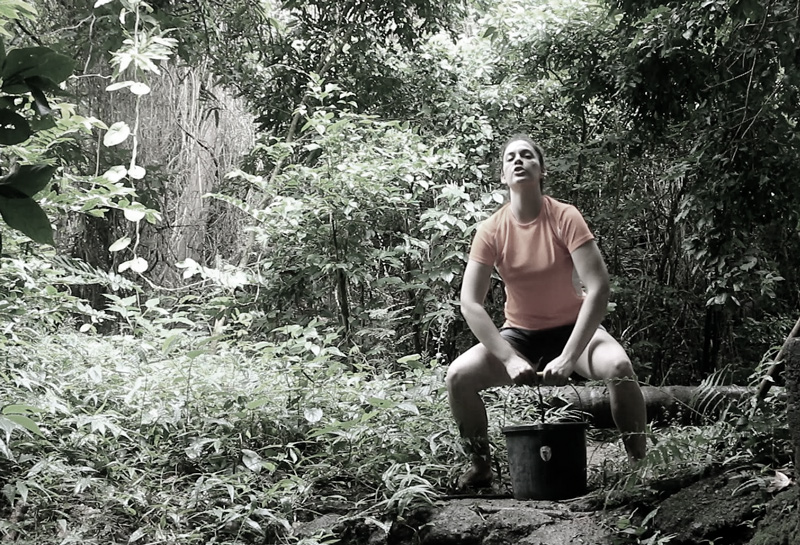 My sister Christi spent almost a week with us and while she was here, we had to make a video together:

What says “family togetherness” better than filming a crossfit parody?

This is yam season right now and there are yams growing wild all through the jungle. When the vines start to die back, the roots are ready to dig. They’ll sit in dormancy for months, then spring back into growth sometime in the spring.

These are my old friend Dioscorea alata, though they are the white/yellow type, not the purple variety. I haven’t seen any purple ones here.

Digging yams is a pain in the clay here. You can see the trouble they give me in this recent video:

We got a good harvest, but man… the clay is thick. It’s probably better for pottery than gardening! If you want to know more about growing yams, I have an in-depth post here.

Though I’ve been posting goofy videos for years, people still don’t seem to get my jokes.

Or that they are jokes.

This comment on my “Machete Safety” video is a case in point:

My IQ is in the top 2% of the population. At least.

If you don’t understand why I’m doing something, it may just be because you’re unable to grasp it. There’s nothing wrong with that. We all have our own gifts.

Machete Safety is a meta-narrative that works on multiple dimensions.

I claimed it was a joke – but it’s not just a joke. Though on its face it appears to be Rachel wearing my clothes and re-enacting my machete injury, in reality it’s a treatise on my fears that String Theory fails to adequately explain the physical universe.

Seriously – is it that hard to grasp that the machete represents quantum gravity? Anyone?

Of course, it’s possible that Michael’s comment was representative of perturbation theory… which would completely blow my mind. It could make sense, as the complexity of my theory might be challenged by his simplistic “not actually informative” rebuke, following the natural chain of Hamiltonian disruption.

However, the “good info mixed in with noise” sounds like the popular Chaos Theory silliness that took off after Jurassic Park instead of a rational response to my symbolic shrug in the face of the blurry edges of modern physics.

Well, you can’t win them all.

Alternately, these interchanges may occur because my sense of humor, though funny to me, simply doesn’t translate. I know a very high IQ guy who doesn’t think I’m funny at all.

I don’t care. I still giggle like a middle schooler when I put together some of these videos. I can’t tell you how much I laughed creating In Seach of Bilimbi, even though the critics panned that one. An alternate theory: maybe I just want to know what love is?

Christi is a natural comic – let’s make that girl a star!

Have a great Monday.

This video was fantastic. Loved it when she fell. Looked like it hurt though. I hope no one was injured in the making of this movie. Great job to you both.

She scared me to death when she fell – total accident. Just some bruises, though.

This video was one of your best. YamFit has changed my life. I’m going to grow some yams here in Florida, and tote them around in a bucket and throw them, etc.

Perfect! Film it and I’ll put it up here!

You are truly stylin’ that Florida Food Forest shirt.