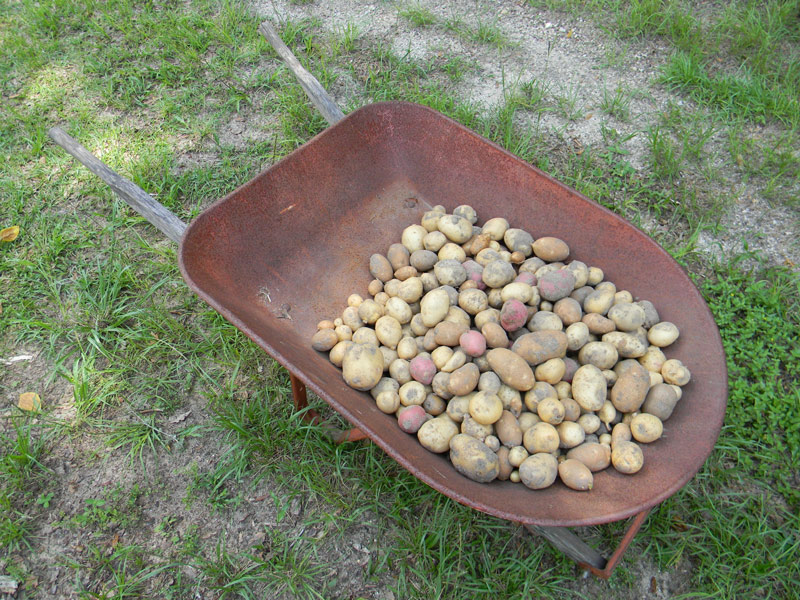 This last year’s yields weren’t as impressive as I had hoped.

Granted, I was running a nursery and writing about 10 articles/posts a week in 2014, plus I wrote a book… but that’s really no excuse.

This year is it. This is the year of the one-ton garden.

The less productive crops are being phased out (goodbye, sugarcane!) and the more productive staples will be phased in (hello, Seminole pumpkins!)

Since the weather has been so warm I’ve decided to start planting the cool-season spring vegetables now. We’ve expanded the garden beds by about 500 ft2 in the last couple of weeks and will soon add another 1000 ft2.

Yeah, I supposed I could cheat and just plant a ton of watermelons to reach my goal… or maybe giant pumpkins…

But I won’t. I am going to go for higher-yielding plants. The Seminole pumpkins did amazingly well for us, as do the sweet potatoes and yard-long beans. I’m also going to really go crazy with the cabbages. I love those. My beets are even looking good this year, so I just planted lots more. And onions. Oh yeah.

I’ll probably also try potatoes again and just kill all the fire ants so they don’t destroy another harvest.

(Would that still make my garden organic? Just a LITTLE poison?)

No-work malanga roots
ATTACK WASP!
Another good reason to keep nettles around
“I Can’t Plant A Food Forest… Where Would The Kids Play?” DEBUNKED!
A Thai Garden Tour

Crash Gardening Season Finale: Water Chestnuts Hijacked by WHAT AM I WATCHING???

Well, I don't aspire to 2000 lbs of produce. I want the garden planted for every season. I want to move 2 blueberries to a better spot. I want to plant mint. I want to pull up 3 azaleas and plant more edibles there. I want to re-do my trellis. I want to prune my trees for productivity. I want to harvest some tomatoes. (Tomatoes are my NEMESIS.)

Just getting a garden ready for each season is a good goal. I'm hoping to have a better summer garden this year, rather than a complete weed patch.

I had a great summer garden last year, for the first time. Once I figured out that the only things that will grow in our heat and humidity in July are okra and butterbeans, I did fine.

I was inspired to go out and get started on that trellis today, because I took a second to write out my goals in response to your question. Thank you for asking and getting me motivated to really do it, rather than look at it.

No problem – thank you.

Chaya, yard-long beans and cassava all do well in the heat, too. If you get tired of okra and butterbeans, that is.

That's a pretty solid goal. I'll aim for that maybe next year! I need to start weighing my crops more diligently. The worst are the leafy greens.

My goal for the year is to get selected as a vendor for our local farmers market. I'm trying to plan what to concentrate now. But I'm really just looking forward to the experience.

I started at the Farmer's Market this last year and greatly enjoyed it. Go for it and good luck.

Thanks! I'm definitely going to try. Any recommendations?

Find a niche and stick to it. Mine is rare edible plants, plus good fruit and nut trees that grow in this area. Stay away from crafts. Lots of those and they seem to sell poorly. Things that people need sell. My booth was next to Tim Stoke's booth – he sells a lot of locally grown produce. We had the hottest booths at the market. Also, hit the Farmer's market and see what they don't have. Even if there are three plant vendors there, I know my niche holds up well. They'll have tomatoes, peppers, ornamentals… I'll have chaya, Surninam purslane and Japanese persimmons. Being friendly and outgoing makes sales happen, too. Smile. Talk. Ask people what they're growing or what they like to eat. Give away small items to children. Don't wear sunglasses. Also, be there every single week. My sales increased and I got a good following of regulars by sticking it out even when it was miserably hot.

No sunglasses… Check. Appreciate the tips.
I have two questions for you. How do you get around selling named vegetable varieties from seed? For example something like a Floradade Tomato. Do I just stick with heirlooms to play it safe?
And how do you go about selling plants like chaya and cassava that are toxic until cooked? Just educate them first?

I don't think named vegetable varieties will get you in trouble since you already bought the seed. Never heard of that being any kind of problem. You would possibly get in trouble if you propagated a named fruit tree variety and sold it, though. They like to get a patent fee out of you for that. In order to sell plants at farmer's markets in Florida, unfortunately, you need to have a nursery license. Not too hard to get but requires paperwork. Not sure if that's true for all states.

With chaya/cassava, I just tell folks. They're not that toxic and both are recognized as vegetables.

Heh, usually I fight with my dad about our garden because I want to do everything organically and he's like, "What's wrong with a little Roundup? It says it's safe to eat!" This year the leaf cutter ants teleported in and ate an ENTIRE newly transplanted grapefruit tree and half a loquat tree overnight (these were like five-foot-tall, five-foot-wide trees!) and I the next day I said, "Dad, I have abandoned my principles. Go to the feed store and buy the nuclear-option ant killer. I don't just want them to die, I want them to suffer. I want ants to be unable to reproduce on this ground for the next hundred years. I want our yard to be a story that the old ants tell the young ants about the Place That Must Not Be Visited." So we killed them all and then our entire yard and driveway caved in because their tunnels were so extensive. Sigh.

I always have good luck using the cheap, instant rice to get rid of fire ants. They take it in and die when it expands after eating it. I've read that cornmeal works, too.

Well thanks for the Nursery license info. I live in the Panhandle so I will need to get one. Was it a hassle and do they come and inspect your plants and process? I don't really expect to produce more than 5,000 plants so it looks like the fees will be minimal. Is there a test involved too? Sorry for all the questions, just wasn't aware I needed one. I know the patented tree varieties can't be sold and propagated without permission. I just wasn't sure about the veggies. Thanks again and good luck with the grafting!