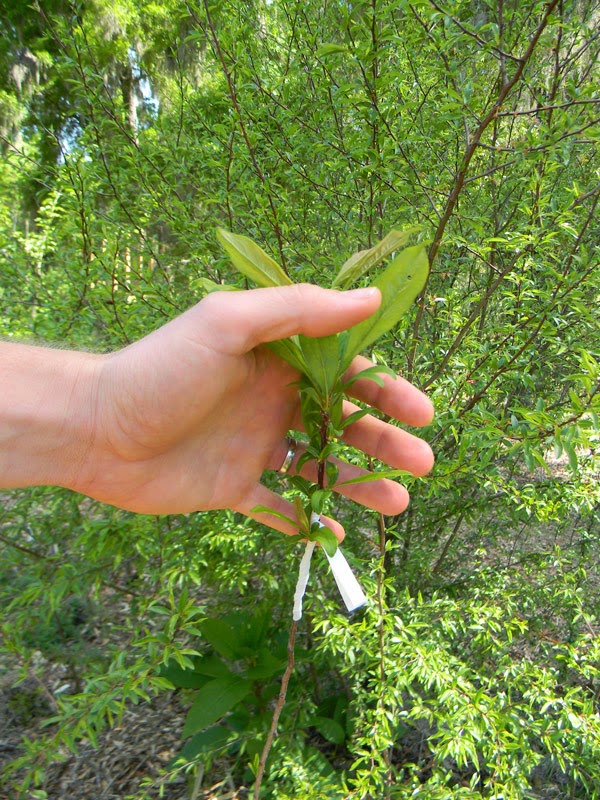 Last year I performed the above graft of an improved European plum variety onto a native Chickasaw plum and it took wonderfully. That scion has now grown into a 5′ branch.

A couple of weeks ago I had a conversation with Paul Miller of Rainbow Star Farm in Gainesville. For three-plus decades, he was in charge of the fruit tree breeding program at UF. The man knows his stuff.

I told him about my successful graft and he congratulated me… then told me something very, very interesting. Apparently, the Chickasaw plum is a “universal” rootstock for more than just other plums. It will also support peaches, nectarines, apricots and potentially even cherries.

The problem, he told me, is that the Chickasaw plum is very flexible and doesn’t grow nearly as large as many of the trees you can graft onto it. That means that above the graft you can have a large tree top that will bow the lower Chickasaw trunk down to the ground. This is exactly what’s been happening with the graft pictured above. In order to fix this, he told me to simply knock a fence pole into the ground and tie the tree up.

Why would you want to bother?

For one thing, the Chickasaw plum is a super tough little tree. It manages lousy soil, nematodes, drought and all kinds of other stresses without flinching. It’s hard to say the same for improved fruit trees.

For another thing, Chickasaw plums will pop up all over the place, thanks to birds dropping the seeds around. If you’re in an area where Chickasaw plums grow in the woods near your place, you’re likely to have them show up in the yard if you quit mowing.

On the downside, the Chickasaw plum is a prolific creator of suckers. They’ll form a thicket in no time if you don’t stay on top of them. Of course, there’s nothing keeping you from grafting additional peaches, nectarines and plums onto those suckers and making a home-grown thicket of edible fruit.

Down the street from me there’s a wild plum (which may be a Flatwoods plum, not a Chickasaw) growing over the fence in an empty lot. Since it was popping into bloom this last week, I decided to take the opportunity to guerrilla graft in some peach scions from one of my seedling peaches.

If they do, I think whoever owns the lot is going to be totally confused by the peaches that will soon be growing on the roadside.

I’ll keep you all posted.

I’ll also be offering Chickasaw plums for sale in my nursery this year. They’re a decent sweet-tart fruit in their own right, but if you’re interested in grafting… it’s hard to think of a more entertaining subject for improvement.

You CAN Start Grafting This Spring – Here’s...

Very cool experiment! I have a plum here that produces gorgeous blood red heart-shaped fruit with purple skins. I'd love to try either rooting some of the branches or maybe grafting a branch onto one of my flatwoods plums?

I'd graft for sure – you'd get a strong tree much faster. I'd also plant pits.

Heck, I'd come up there and graft with you one day. Drop me an e-mail.

I love how you just go around grafting on other peoples lots lol, i have a lot of the flatwoods plums on my property(im guessing they're the flatwoods, i dont know the difference) i was planning on trying grafting them later. i also have a few wild orange trees here also, gonna try grafting a good aronge on them see how they do with the greening problem. anytime you wanna come up my way and graft feel free to come 🙂

Flatwoods plum should work fine. I'm trying one here this year with nectarine, peach and sweet cherry grafts. They don't sucker like the chickasaw, which is nice.

As for the oranges, all of them unfortunately seem to be susceptible to greening, even the trifoliate orange. I'd try anyhow, though. You might get lucky.

Would there be anyway, in the spring, to get a cutting or two of this plum tree you say has gorgeous blood red heart-shaped fruit with purple skins? I have been dying to graft fruit trees.