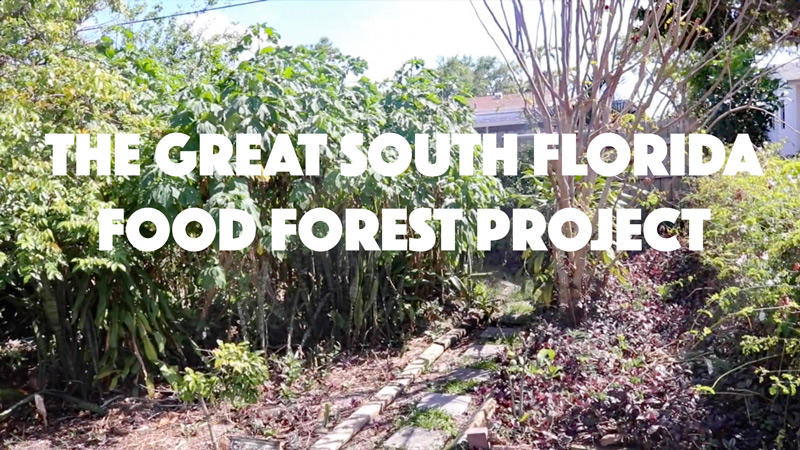 I just posted a tour of the Great South Florida Food Forest Project:

After I do some work this next week, I’ll film another video.

The starfruit, mango, Dwarf Everbearing mulberry tree, Key limequat, tropical almond and black pudding fruit are producing excellently. The Carissa in the front planter continues to thrive and make occasional fruits, though it’s not ever been super impressive. The yams are making huge roots and bulbils.

The Surinam cherry in the back of the food forest is about to start producing, and the Gainesville mulberry is overgrown and not super productive yet. Going to cut it back and see what happens. The tamarind in the front yard has made a few fruit but not anything to write home about. The acerola cherry was badly damaged in Hurricane Irma and is recovering. The jaboticaba in the front is still growing but looks nice and healthy. The grumichama might as well be dead. That tree doesn’t do anything and hasn’t grown in years. The avocado is way small for its age and probably won’t fruit for years. It’s also fighting insects and mold. The cashew tree was accidentally cut to the ground a couple of years ago and is struggling to regrow. The Surinam cherry alongside the house is small and slow. The canistel out front is also too small for its age and is fighting with pests and disease.

I’m going to get a bunch of mulch put down while I’m in town and see if we can improve the “soil” in the food forest a bit. I’ve also fertilized the trees and will be doing some chop and drop after the workshop on Saturday.

This is the dry season in Ft. Lauderdale so the project doesn’t show off as well as it does later in the year, but I am happy to see some of my favorite trees are thriving.

David, I would love to come to the afternoon session if a slot is available. I don’t have online payment accounts so I prefer to pay when I arrive on Saturday.

That is fine. See you there.

My daughter was kind enough to sign me up through her paypal account already. See you Saturday. Thanks.

The food forest looks great. It’s inspiring to see what you can have down here in the beautiful state of Florida. Too many people are put off planting trees because of the wait, but 8 years is the blink of an eye, especially if you have children. Great work, and thanks for sharing.

Hi David, come to find out I have a tamarind tree in the backyard that’s about 25′ tall but hasn’t produced fruit. It’s got those beautiful orchid looking blossoms on it and I wonder if you know how long it takes before it’s 1st fruit? Thanks!

It should be good and ready now. I wouldn’t be surprised to see it set fruit this year.

[…] It was delicious. It is the most flavorful cherry I have ever had. There are a few planted in the Great South Florida Food Forest Project, and my Dad got one to grow in North Florida in a semi-sheltered […]

[…] It was delicious. It is the most flavorful cherry I have ever had. There are a few planted in the Great South Florida Food Forest Project, and my Dad got one to grow in North Florida in a semi-sheltered […]