How to Grow 5 Amazing Tropical Trees from Seed 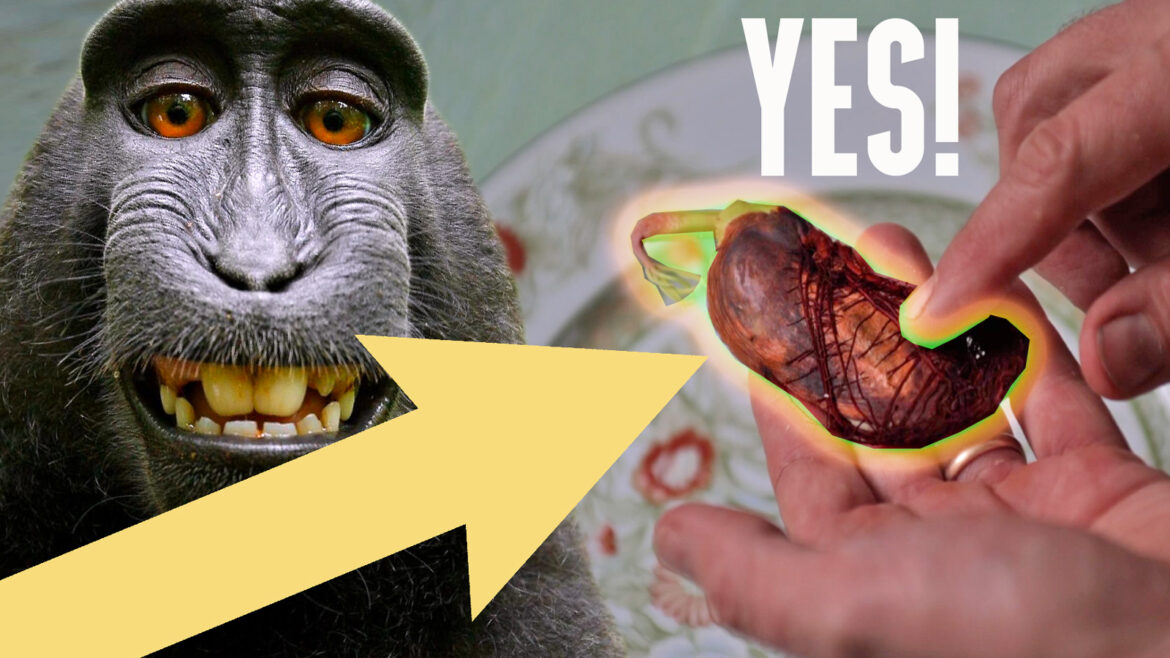 For years I have enjoyed growing tropical fruit trees. We lived in the tropics for quite a while, I had a plant nursery with tropical plants, and I grew up in South Florida.

Though I don’t live in the tropics any longer, we do get tropical fruit from the grocery store and from friends down south.

Even if you live in a colder climate, you might enjoy starting some tropical fruit trees of your own, whether you want to keep it alive on a porch or in a greenhouse or just for fun to see what happens.

Today we’ll to cover five popular tropical fruits and how to grow them from seed. First, here’s the video version – and then keep reading for my expanded post:

Mangoes are one of the very best fruit in the entire world. You can plant an entire mango pit, but what I
like to do is figure out where the woody exterior of the pit feels like it doesn’t has anything in it and cut it open to free the embryo. If you have a pair of shears or a pair of scissors this isn’t that hard to do, though some pits are harder than others.

Like many tropical fruits, mango seeds do not keep. If you get a mango you’d better get that thing planted quickly. Sometimes the pit will already have roots and a shoot inside the pit! 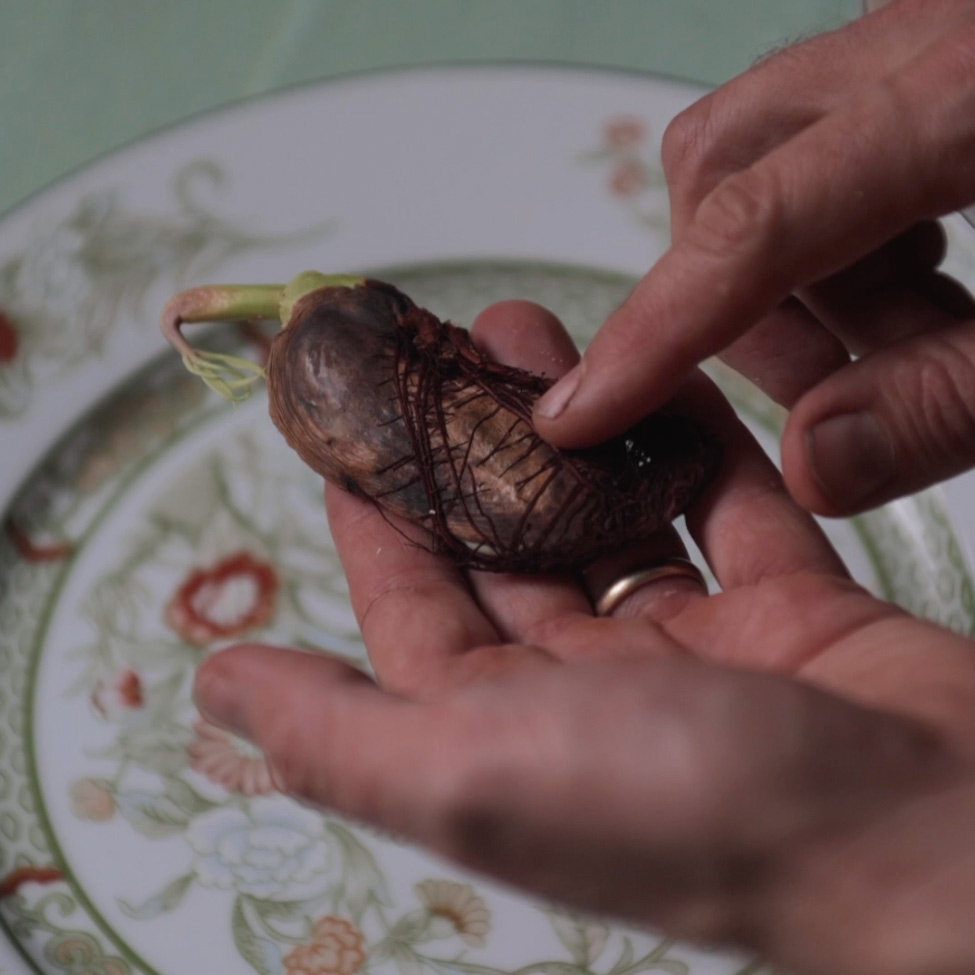 One you plant, it’s going to shoot up and it will grow so fast on the energy in that pit you won’t believe it.

Another thing to know about mangoes is that they come in monoembryonic and polyembryonic varieties. You can actually
tell when you peel the skin back on the embryo. If it’s polyembryonic, you will see little divided portions, meaning there are multiple baby potential mango trees in there.

If it’s just one solid pit inside, it’s monoembryonic. Monoembryonic ones are pretty common in highly bred cultivated varieties. They are sexually reproduced whereas a polyembryonic one may have one of those embryos that’s actually a cross
between two mango trees but the rest of them will be clones of the mother.

If the parents are good on a monoembryonic mango, you’re probably going to get a decent mango tree, if not the best in the world. If we don’t like it we can always graft it!

A polyembryonic mango seedling can actually fruit within two to three years just as a little baby because it already thinks it’s grown up.

Our next plant is avocado. You may have seen the avocado germination trick of just sticking some toothpicks in an avocado pit and then suspending it in a glass of water.  This often causes it to root quite nicely, but I prefer to just take the pits right out of the avocado, bury them into some soil and let them grow that way.

There are many different varieties of avocados. Some of them are more cold hardy than others. If an avocado tree’s leaves smell like anise when crushed, it has cold hardy genes.

When planting avocado pits, I usually stick the pointy side down and the flat side up, but i’ve just buried them in
the ground without paying attention, or had them fall into the compost pile and they come up fine. 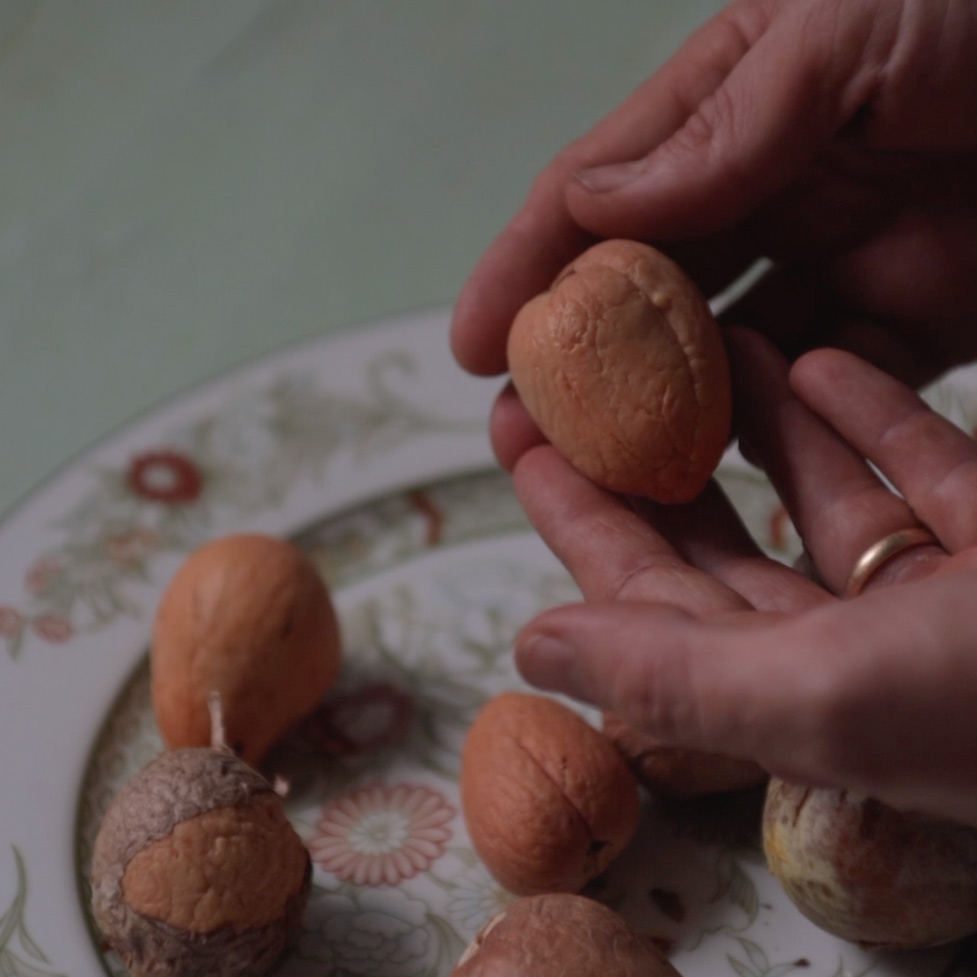 I have had better luck putting them into soil then I have with the toothpick method. You don’t even have to have individual pots for them. You could stick three, four, five or ten of them in a big pot and cover them with a little dirt, then as they sprout just lift them out and put them into their own pots or plant them directly into the ground where you want them to grow. 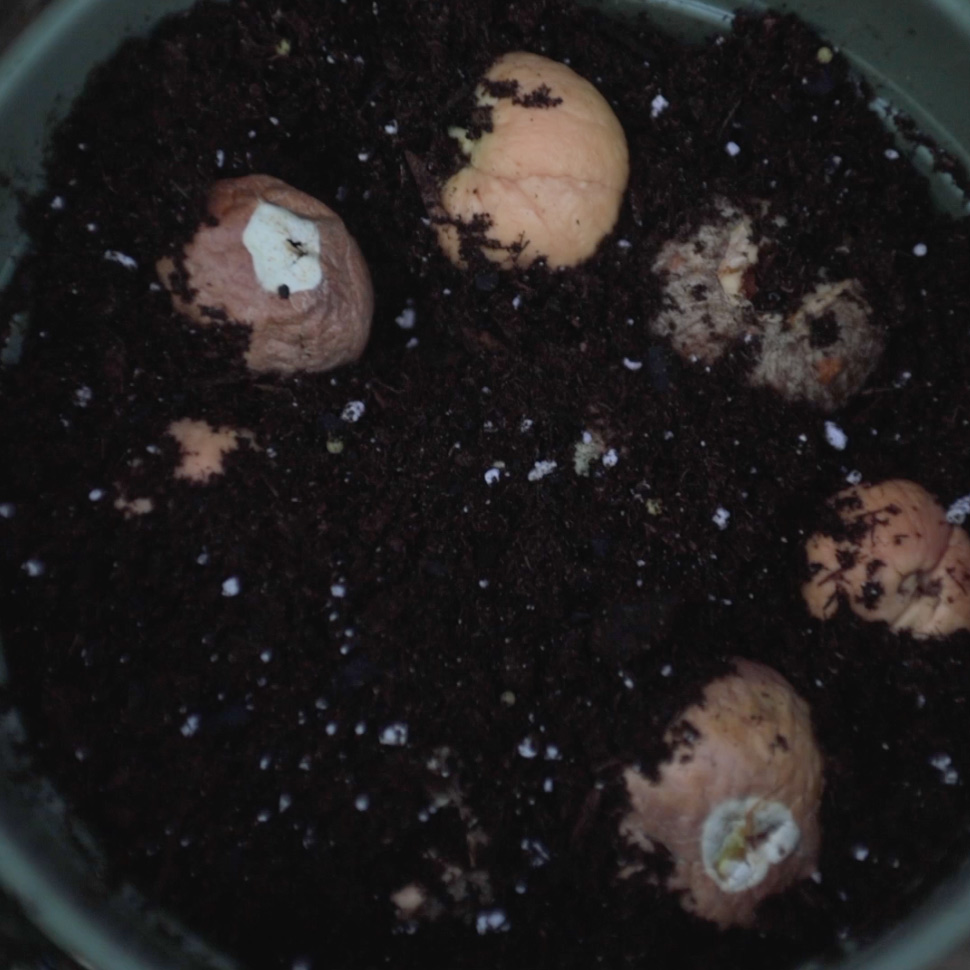 Again, like many other tropicals, these guys got to get in the ground quickly or they will die on you. You can’t keep these seeds like you could keep temperate seeds. You want to get that pit right into something where it can start growing right away.

Our next tropical fruit is one of my favorites. My friend Curtiss has a starfruit tree growing in a protected location all the way up near Ocala, Florida. That is a climate that freezes but he has it alongside of his carport and it does just fine underneath a little bit of an overhang.

Starfruit seeds don’t keep very long, like their cousin bilimbi. They’ll keep for a little while on the counter but not long, so
get them in the ground! 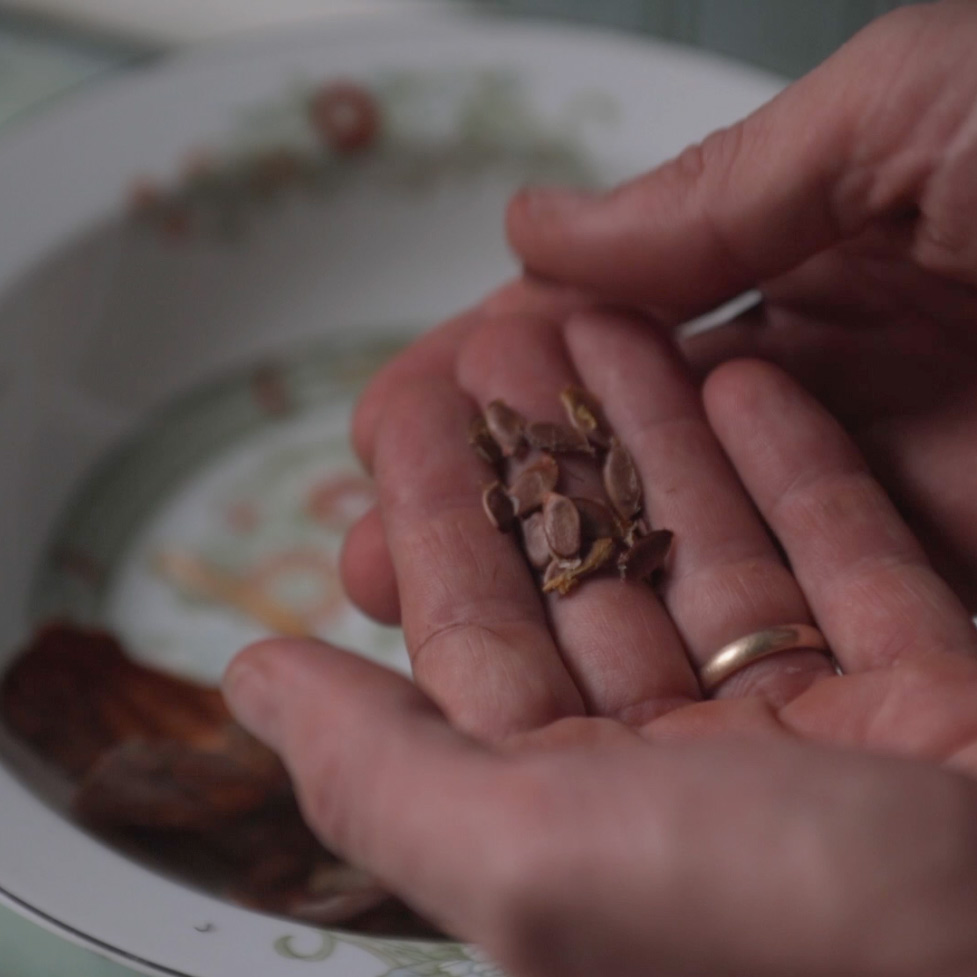 Starfruit can fruit in just a few years from seed. It’s a little bit slow compared to grafting them but it’s not that big a
deal.

Plant starfruit seeds in a pot of somewhat moist soil, give them a little bit of time and they’ll pop up in about a month or so.

Sapodilla is a wonderful, delicious fruit that tastes like a sugar pie.

They have hard, black seeds that are quite beautiful. They do not keep very long at all once you get them out of the fruit, so you want to get them in the ground quickly. 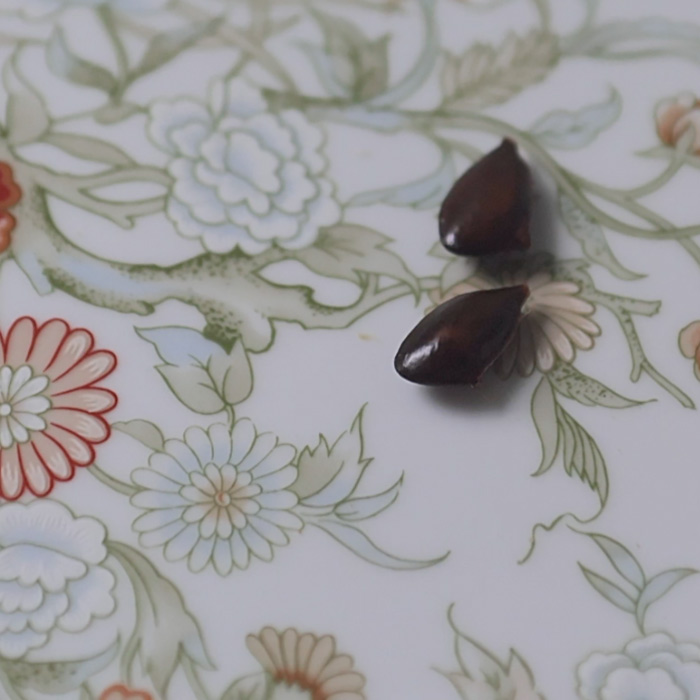 Remember, they’re tropicals!  They’re not going to be happy in a cold climate.

Fresh sapodilla seeds usually come up in about a month and they they grow at a pretty moderate rate. Sapodilla does very well in South Florida. It is a solid zone 10 to 11 tree that doesn’t need much care to give you wonderful fruit on a big beautiful tree.

Our last fruit is citrus. In the video I did on today’s topic, you can see me demonstrate with a lemon. Lemons actually grow pretty quickly from seed and can fruit in just a few years. They’re one of the faster citrus to fruit, with grapefruit coming in at maybe eight to ten years, and limes – especially key limes – can fruit in just two to three years. Calamondin is similar, fruiting in about three years, with lemons usually come in the middle at three to four or five years.

It’s definitely worth doing! They’re more cold-hardy than most tropicals and are really more of a subtropical.

Like many of the others – this is a recurring theme with tropicals – unlike temperate seeds which have to sit
through a season and go through the cold and survive, tropicals are coming from a year-round season where it’s always warm. They need to grow as soon as possible and so they’re not designed to keep, they’re designed to fall on the ground and grow as absolutely fast as possible to out-compete everything else around them in the crazy tropical climate.

Somebody wrote me and said, “I don’t understand why I can’t ever seem to grow citrus!”

I asked, “how long did you keep the seeds?”

She replied, “Oh, I just had them in a napkin. I don’t know, I think it’s been six months or so…”

No – they’re dead! Get a fresh fruit and try again! Pull them right out and put them into some semi-moist soil. Fresh seeds will come up in about a month. You’ll get these little pretty dark green shoots. I usually take a few seeds and stick them into one pot to germinate, then I’ll separate and pot up the seedlings later on. 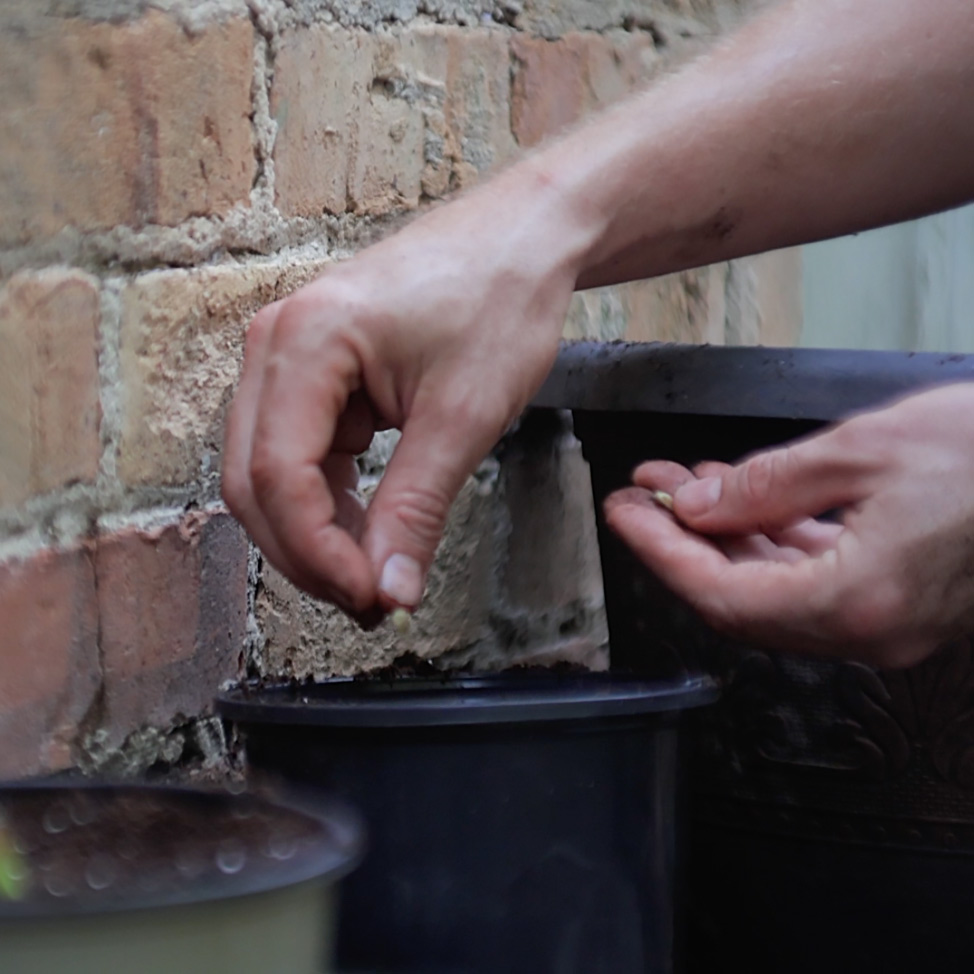 Generally if you plant most citrus from good fruits, you will get a decent citrus tree in return.

There was a fellow that I visited who had a bunch of seed grown citrus and they all made decent lemons and oranges
and grapefruits and limes.

It’s just not going to be exactly what you started with, and that’s fine. 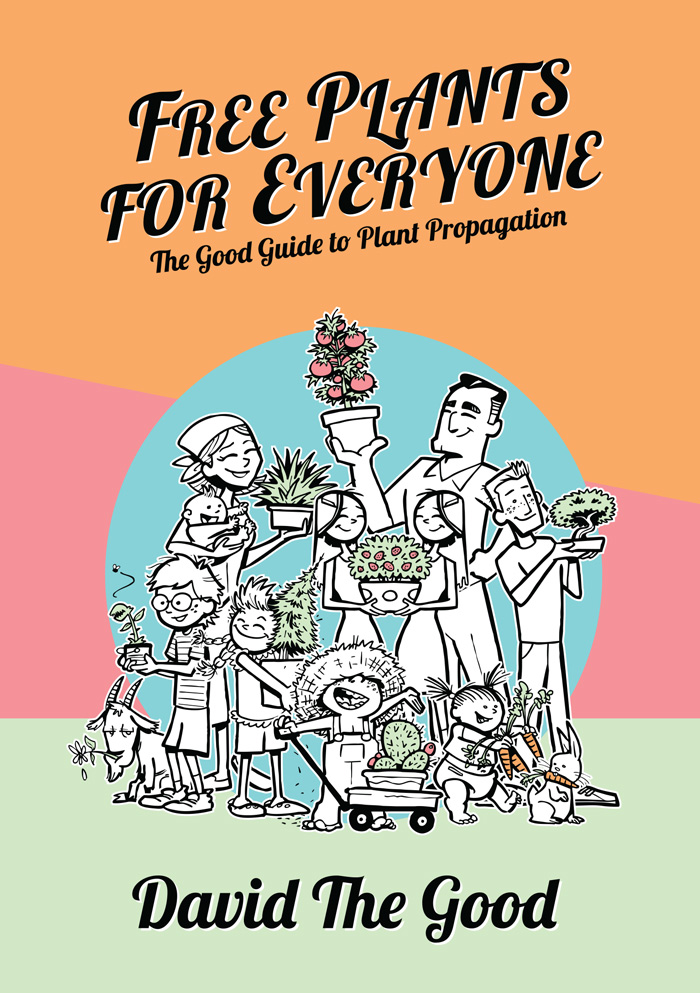 In it, you’ll learn to grow just about any plant from seeds, cuttings, division, grafting, air-layering and more. Thanks for reading!

Those Mangoes ARE TOO CLOSE!

How to Grow a Mango Tree from Seed...