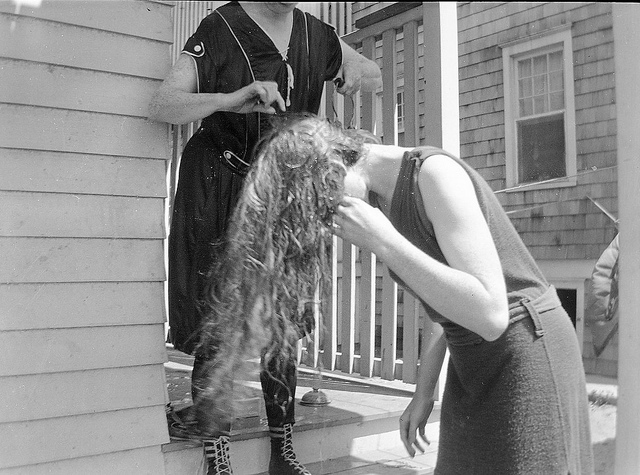 Being able to wash your hair during TEOTWAWKI? Priceless. Photo credit.
My wife has been making our soap for over a year. Once you start using homemade, chemical-free, natural soap… it’s hard to go back to the factory-produced stuff.
The only thing I really miss is Sodium laureth sulfate.
Just kidding.
I’ve spent a decent amount of time considering the options in case of a collapse. If everything fell apart and we could no longer hit the local Walmart for a brick of Irish Spring(TM), going without soap would be a real drag. Have you ever tried showering without it? Getting really clean is next to impossible.
I don’t know about you, but I’d prefer to go through the Apocalypse squeaky clean and smelling slightly of lavender. Or better, gunpowder. But that’s basically a given.
Soap is one of those products that has been manufactured so long that it’s not all that common to make at home.
Sure, you’ll likely run into a crafty lady at church who makes it, but how much of the population knows how to make soap? Or even what it’s made from?
Probably not many.
However, today’s post isn’t going to be directly about soapmaking. Instead, it’s going to be about producing the raw soapmaking materials that go into soap making. There are plenty of sites that will tell you how to assemble a bar of soap from purchasable ingredients… but when things crash, finding those ingredients may get tough.
That’s why we grow our own.

First Things First: What Is Soap Made From?

Soap is an oil that’s been treated with a strong alkaline solution. This is called “saponifying” the oil. When you scrub with soap, you’re able to break up oils that would be difficult to remove with water alone. It is science!

“Help! I can’t get the oiliness out of my hair!!!”
Basically, soap requires a strong alkaline solution and a fat. Lye (Sodium hydroxide) is the most common alkaline substance used for soap, though it’s not the only thing you can use. As we’ve experimented with soap making, we’ve found that saturated fats make nicer soaps than do unsaturated vegetable oils. Right now it’s easy enough to buy lye and fat. Right now. When this window shatters, we’ll need other options for finding our ingredients. Let’s look at a few.

Before we developed an unhealthy obsession with lean pigs and factory soap, there used to be varieties of pigs raised just for their incredible amount of fat.

Part sheep, part pig, all fat. Photo credit.
Lard was a big part of life less than a hundred years ago. It was used for cooking, lubrication, illumination, sausage-making, and…
Soap. There’s nothing like lard soap.
If you can manage to raise a few pigs or trade for them, you can make lots and lots of soap from the fat.

Ducks are loaded with fat. It’s what makes them able to glide on top of the water, rather than sink into it like I do.
If you raise ducks on the homestead – particularly chunky ones like pekins – you have a source for fat. As a bonus, they breed quickly, grow faster and forage better than chickens do.

Beef tallow is another good fat for soap-making. This gal makes amazing bars from it (among many other things). Cows aren’t as easy to raise on small acreage as pigs are, but perhaps you can trade a local cattleman some soap for some fat. It’s often discarded in butchering, believe it or not. Savages!
Another bonus of beef tallow soap: it makes a great lather.

There are other animal sources of fat but few are as good as cows, ducks and pigs.
Keep feeding your dog cake, though. Once day it may pay off.
(For a look at plant sources of soap, plus making your own lye… keep reading over at The Prepper Project!)

I'm one of those crazy soap makers….my soaps are made with a combination of lard, olive oil, coconut oil, and castor oil. Lye and goat's milk round out the basic ingredients. I've also rendered lard from pigs I've raised–which included running the fat through a manual meat grinder to break it down some, then a 7 hour slow simmer on the stove to melt all that fat down to separate non-fat solid matter from the fat. (Cracklin's, as they're called in the country!) Then, the liquid fat was slowly poured through cheese cloth and into wide-mouth pint mason jars and canned. Talk about a LOT of work! But at least I know the process and will be able to accomplish the task when needed! I've also printed out how to obtain lye from ashes, but won't attempt that as long as I have lye in my bucket (50# of lye is available from a local chemical supply house for around $50, so I stay stocked up…) That's enough lye to make over 2,000 four-ounce bars of soap!!

It's excellent that you were able to stock up on lye. It's been hard to us to find locally.

I've also done the lard thing. A big mess but worth it.

Hey – if you ever want to write a guest post on soapmaking, I'd love to hear more.