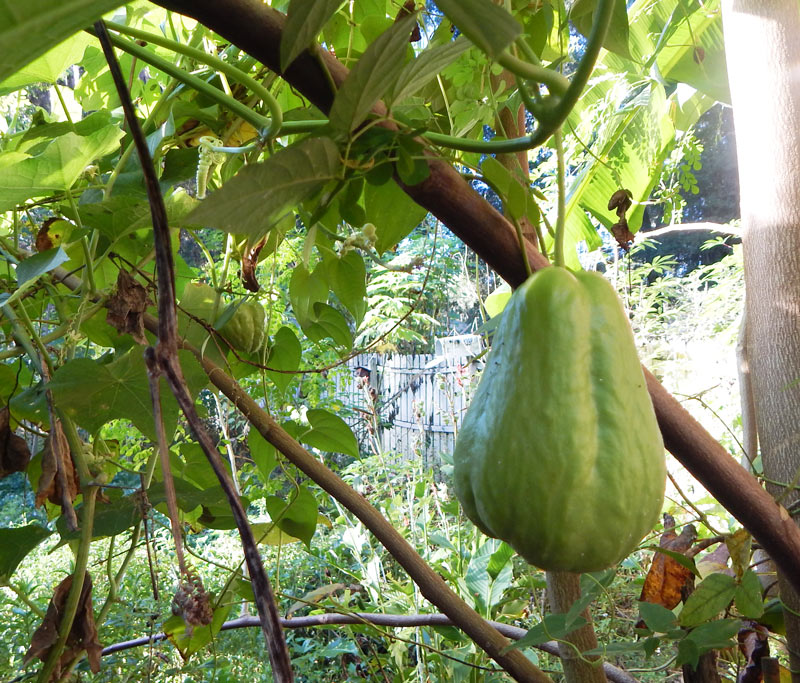 Growing chayote is like growing a pear… that bears in just a few months!

This is my first year successfully growing chayote squash and I’m thrilled to have them finally making their way into the kitchen.

I think it’s quite unfortunate that they’re called “squash,” since they taste nothing like a squash. Chayote taste more like a crisp cucumber mixed with a hint of pear and fresh green beans. Juicy and refreshing – more like eating a mild fruit than eating any other squash.

This is understandable, since they’re in the same family as melons and cucumbers. Some have called chayote squash “vegetable pears,” which isn’t a bad nickname. They’d certainly fit much better in a fruit salad than zucchini would.

Growing chayote isn’t hard if you have a long enough warm season (I’ve read 150 days). I planted mine in March at the base of a pomegranate tree off the back porch. Growing chayote on a pomegranate tree

This is fine, because by the time they climbed over the top of that pomegranate, I already knew it wasn’t going to produce fruit this year. The blooms had dropped, so I went “forget it! Thou art a chayote trellis, non-bearing knave!”

Rachel is coming up with chayote recipe ideas already and we’ve only harvested two thus far.

More are coming, though: Unlike their squash cousins, chayote don’t produce seeds. Instead, they entire fruit surrounds a single embryo in the middle. To grow a new vine, you need to plant the fruit itself. I buried mine half-way in the ground and they did fine.

These chayote originally came from my friend Joe Pierce of cob oven fame. Since frost will take a chayote squash vine to the ground, he puts some of the final fruits of fall on the porch and lets them sit until spring when they can be planted out again. They’ll grow big crazy vines right out of the end of the fruit… very strange.

Speaking of Joe, when I was filming the cob oven video, he also did a quick demonstration of a homemade pump drill / bow drill firestarter – I just posted the video on my channel a couple of days ago:

Growing chayote squash as a perennial is possible in warmer areas of the state, and may even be possible up here in North Florida; however, this is my first year of successful chayote growing so I’m not sure if the vines will come back or not. They don’t start setting fruit until the fall, so if you live too far north (say, past Georgia) it may be impossible to get a good yield. (Let me know if you’ve heard differently or if you have luck – I always love to hear gardening stories.)

Mother Earth News did a good article on chayote a few decades back and the link is here. Lots more info worth checking out. It has the potential to be a remarkably productive plant – I’ve heard of folks around here getting close to a hundred fruits and having the vines climb way up into the oaks.

Though I’ll bet I’m the only one growing them on a pomegranate tree.

Congrats on the chayote! Easy and delicious chayote recipe:
Peel the chayote with a carrot peeler.
Dice the chayote.
Fry a pound of hamburger and some garlic in a pan until hamburger is browned.
Add the diced chayote and cook until tender.
Add salt and pepper to taste.
Eat over cooked rice.

Can you plant them in a pot? I don’t have much room here in Va. I have always loved them in Brazil where I’m from. The only way we ate them was as a salad…..cook them til tender , cut them, which ever way you like, salt pepper vinegar and slices of onion. Going to try other recipes.

I’ll bet you could. You’d just need a trellis.

David- I’m a new subscriber & love your info! I hope I can find one of these type squash. On another note we live in north fl and need to plant a ground cover to cover about half an acre of bare ground. We want a perineal, low growing plant, instead of grass. Any suggestions?

Welcome to the club! You can find chayote in some grocery stores and plant those. As for ground cover, try perennial peanut.

David, I used to live in New Orleans. They WILL overwinter for you in North Florida, and that gives them a leap forward so they will produce in July or August.

My next-door-neighbor had one. I wasn’t friendly with her for other reasons, but I am quite sure either she mulched the blank out of it to protect from frost, or it was so well-established it took care of itself. (May have been in a bramble corner of the yard). oh, and perhaps it was a sheltered microclimate.

It would die back to the ground in winter, but invariably grow from her yard, overtake the top of the metal carport in the back of my lot, then reach the back stairs (metal). It would climb the stairs; I just had to step out the back door and pick! I always had ample pickings.

Just mulch the area like crazy – it will be worth it!

That’s great to know – thank you. Mulch fixes all kinds of things.

I have tried many times to grow them but they get infected with nematodes and die. Anyone have any ideas?

You mention Mrs. Goodman is getting together chayote recipes to try- is she still working on her recipe book for odd edibles? I am really looking forward to seeing that one published- God bless, Trish

Thanks. Yes, she’s still gathering recipes and doing research; however, since we’re preparing for a move (and it’s homeschooling season again) she’s put writing on hold.

David this is so good to see! I’ve been wanting to grow chayote for years now but always miss the planting window. I wonder if I could sprout one from the grocery store? Otherwise, I’ll hit up Joe.

Tip: but the mirleton (chayote) at a dollar store and note the seed coming out of the end opposite the stem, these are already sprouting. Many a fence in New Orleans are held up by these vines.
Plant them at about a 45 degree angle in soil, as the sprout grows I mound soil around it. For winter mulch heavily and next year you’re off to the races again.
Look for a stuffed mirleton recipe on the internet………yummy Cajun cooking!

I have grown chayote several years here in the DR. They are very large and unwieldly. I have never had them grow as a perennial, I did not know they could. The amount of space they take for the amount of chayote I got was not worth it to me because I can buy them so cheap. We eat them almost every day in a variety of ways. I am sure if they became not available, I would start growing them again in a better place. They need regular water to grow well, as well as a lot of space.

My first taste of chayote was in New Orleans where it was baked with a crab meat stuffing. Yum.
I’ve tried to propagate them be rooting them first, but they seem to prefer just getting stuck in the ground with nature doing all the work.

And yeah, letting them sit in the ground worked a lot better for me too.

Were you able to overwinter your Chayote?

Yes – it comes back year after year.

Hello David, I got a late start this year growing my chayote but it has rooted well and they both have three vines but I do not think they are going to make fruit this year as winter seems to be starting early this year. We are in UK hardiness zone 9b which rarely hard freezes like our beloved Florida. I saw your video about Chayote surviving winter and I used your “Pushing the Zone” techniques and planted them on South side of my house. I was wondering if the vine can be rooted and grown inside to hedge my bet on survival like I am doing with coccinia grandis and my bolivian cucumber vines. Also since we rarely go much below freezing and hardly ever hard freeze do you think if I much with straw or hay and use a water barrel as a warm mass protector I would have a good chance of root survival? Let me know what you think. We love the dreaded “Z” squash and are hoping this will become our new perennial food source. Love to Rachel and the goodie juniors. I hope you are safe from these crazy hurricanes. Fred & Anna from the UK.

I’m not sure, but you might be able to root from a piece of vine. Chances are good they’re about to start fruiting just at the worst time. They often get kicking in October! In 9b, that root should sail through the winter.

About a month ago I saw some Chayote for sale in the supermarket. Bought one on a lark. Popped into a pot half buried. Little water and left it alone. Really did not expect anything. It was product of Mexico so I assume it was irradiated and would not grow.

My surprise when I pursued the patch today and it had budded out! We are located zone 7b/8a so a few questions:

* Intend to transplant to a larger container. I will do so when the main stem is about 1′ in height. Is that too late?

* Is a wicking barrel appropriate? Too wet or dry?

* I can site the plant to get either morning or afternoon exposure but not both. Which is more advantageous?

* Storage. Does the squash store well so that I can harvest in the fall then keep a couple of them plant out the next spring?

I just found out that the vine growing on my banana tree is a Chayote, I have no idea where it came from and I did not plant it. When the vines started up my banana trees I cut them out it looked so much like a Philodendron vine I thought it was poison to my dogs, but it came back with white flowers and then my husband noticed those big green pods. I had no idea what it was until a person on FaceBook said it was a Chayote. Is it unusual for it to arbitrarily grow out of nowhere ?

Yes, very unusual. It might be milkweed vine, not chayote.

Can someone tell me when to plant chayotes in Melbourne Fl. I believe is zone 9. Thank you so much