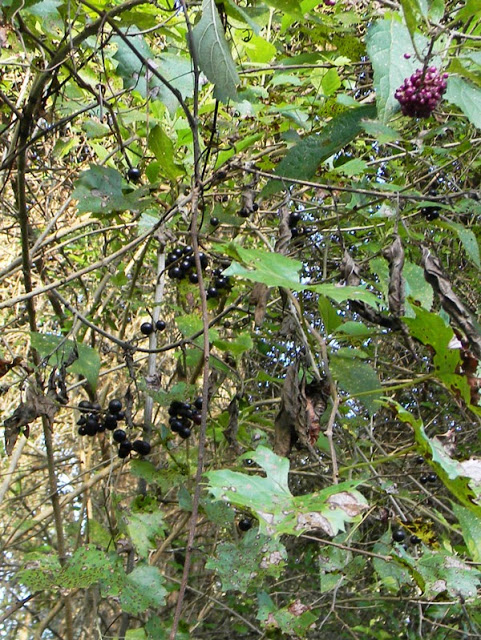 Andrew Wallace (who is now my alternate grape-growing researcher) shared this fascinating pdf on growing grape vines on elm trees.

Many Roman books on Agriculture have lasted to the present day. Cato’s De Agri Cultura (2nd Century BC) is the oldest known prose work written in Latin. Different authors (Brehaud, 1933; Sáez 1996) indicate that the importance given by Cato to vines and olives reflects the transition from subsistence agriculture, based on cereals, towards a more commercial agriculture, in which wine and olives played a significant role.

In his oeuvre, Cato explains the way vines should be married to trees, and how both should be pruned: Be sure to begin in good time to prune vines trained on trees and to layer vines.

“Be sure to train vines upwards, as much as you can. The trees are to be pruned thus: the branches that you leave to be well separated; cut straight; do not leave too many. Vines should have good knots on each treebranch. Take great care not to ‘precipitate’the vine and not to tie it too tight. Be sure that trees are well married, and that vines are planted in sufficient numbers: where appropriate, detach vines entirely from the tree, layer to the ground, and separate from the stock two years later.” (De Agri Cultura 32; Dalby, 1998).

Although he did not indicate which species should be used, elms are cited many times in his book: they provide fodder for sheep and oxen (De Agri Cultura 5, 6, 17, 30 and 54) and how and where they can be transplanted is also indicated (De Agri Cultura 28 and 40). The second Roman reference to the cultivation of elms is found in Varro’s De Re Rustica.

Marcus Terentius Varro (116 BC-27 BC) was Roman senator and led Pompeian forces in the Iberian Peninsula during the civil war. In his text, he considers elms the best trees for plantations because they are good props for vines, good fodder for cattle, they provide good poles for fences and firewood (Gil et al., 2003).

By the 1st century BC the cultivation of elms and vines together had become such a frequent part of the Italian landscape that the plant motif began to be used by Latin poets. Gaius Valerius Catullus (c. 84 BC-c. 54 BC), Roman writer contemporary of Varro, introduced the topic of the marriage of vines and elms to literature. Catullus identified vine and elm with wife and husband, respectively, in Carmina (Poem LXII: Nuptial Song By Youths And Damsels, verses 49-60; Burton and Smithers, 1894):

“E’en as an unmated vine which born in field of the barest Never upraises head nor breeds the mellowy grape-bunch, But under weight prone-bowed that tender body a-bending Makes she her root anon to touch her topmost of tendrils; Tends her never a hind nor tends her ever a herdsman: Yet if haply conjoined the same with elm as a husband, Tends her many a hind and tends her many a herdsman: Thus is the maid when whole, uncultured waxes she aged; But when as union meet she wins her at ripest of seasons, More to her spouse she is dear and less she’s irk to her parents.” Hymen O Hymenaeus, Hymen here, O Hymenaeus!

The Latin poet and mime Publius Syrus also lived in the 1st century (c. 85 BC-43 BC). Native of Syria (hence his name), he was brought as a slave to Italy, but soon he was freed and educated by his master. His mimes became well known in the provincial towns of Italy and at the games given by Caesar in 46 BC.

All that remains of his work is a collection of Sentences (Sententiae), a series of moral maxims. One of these sentences says Pirum, non ulmum accedas, si cupias pira (You should go to a pear-tree for pears, not to an elm; Nisard, 1903). This maxim is probably the origin of the Spanish expression No se le pueden pedir peras al olmo (You cannot ask the elm for pears) and the Portuguese Não pode o ulmeiro dar peras (The elm cannot give pears). With the meaning of asking for something that is impossible, the Spanish expressions would appear seventeen centuries later in Cervantes’ Don Quixote, when vines were rarely planted together with elms as we shall see. But why did Syrus compare a pear tree with an elm, a species that does not produce edible fruits, instead of with any fruit tree like an apple, a cherry or a plum tree? The reason is, in our opinion, the cultivation of elms with grapevines, more frequent than other fruit tree plantations because of the higher profit obtained from the wine. Thus, although not pears, for Syrus the elms did give a fruit: grapes.

I love it. Now I’m going to have to do some experimentation.

Growing Apples in the Tropics Book

“I Can’t Plant A Food Forest… Where Would...

I wonder about elms though. With Dutch Elm disease, there are elms but they aren’t at all long lived. (Some popped up and I’ve left them in at least long enough so my son can try making a bow from it.) Maybe Ironwood or thornless Honey Locust would work.

Maybe marry it to a mulberry tree? You are already grow them in your garden and you prune them to keep them low and in shape. The grape might outlast the tree though.

(apparently you shouldn’t use the pear trees, though)

I think that’s a great idea.