Growing Passionfruit and Their Kin in a Florida Food Forest 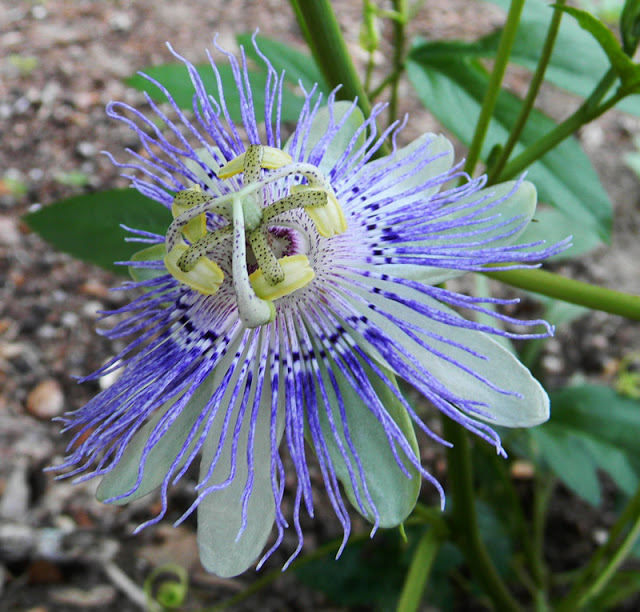 The following is an excerpt from my upcoming book Create Your Own Florida Food Forest (Heavily Revised, Massively Expanded and Beautifully Illustrated 2nd edition)

In our backyard in North Florida we regularly found both gulf fritillary and zebra longwing caterpillars on our maypops. The fruit of the maypop contains mostly air inside, with maybe a teaspoon of delicious pulp that tastes like tropical fruit punch. The pulp is similar in flavor but sweeter than its better known culinary cousin the passionfruit, AKA Passiflora edulis. The latter, however, is more more productive and a better edible. Another common passionfruit relative is the giant grenadilla (Passiflora quadrangularis), which makes almost football-sized fruits that are filled with sweet pulp.

My favorite of the family is the delicious Passiflora laurifolia, which is the most delicious fruit of the whole bunch, with a marvelous explode-in-your-mouth tropical flavor that you would not believe. Also known as the “water lemon,” it is a very common wild food in the West Indies and is quite refreshing on a hot day. Another popular member of the passionfruit family is the “banana passionfruit,” which is actually any of a number of species. I have not grown any of this type.

The most cold tolerant of the passionfruit in Florida is the native maypop, which grows much farther north than our state. The least cold tolerant I have seen growing in the state is the giant grenadilla – which is a very tropical plant – and likely won’t grow too far out of South Florida. I saw a nice specimen at the Rare Fruit and Vegetable Council of Broward County and was able to obtain seeds which germinated readily.

The “normal” passionfruit which is a much-beloved addition to tropical drinks and punches, P. edulis, comes in both purple and yellow forms. They failed to fruit, then froze to death in my North Florida food forest and did not come back, though they probably would survive in a sheltered location. After losing two plants, I gave up on them and just grew maypops instead.

In South Florida, passionfruit and their kin are beautiful additions to a food forest and will happily grow into the trees and drop an abundance of ripe fruit. Maypops can be found wild in awful sandy soil in the scrubland as well as in good hardwood forests.

Seeds germinate readily and usually take a few weeks to come up. Cuttings are also easy to start. Plant passionfruit and their kin here and there where they can climb into your food forest canopy and they will reward you with fruit for years to come.

I grew a passionflower vine for the first time this year– it climbed the fence and ran a long way along the top, and produced magnificent flowers. I planted it for the fritillaries and they have found it! Didn’t produce a single fruit, though! Are there any soil or weather or growth conditions that have to be met to get fruit? does there have to be more than one vine to cross?

They are on my “to plant” list. The flowers are so pretty. There is a more cold tolerant strain of P. incarnata available around here from Oikos.

Found your website while snooping for passionfruit seed or plants for my yard. I have grown ascelepias tubersosa and currivasica for years hoping to attract monarchs. I have also mantained a small area in my backyard for whatever passionfruit seed I came across for gulf fillitary butterflies. I have a couple small trees in that area that the vines climb. I have written down the names of the passionfruit that you had listed for your garden. I stubled across a passionfruit seller on ebay that lists a great number of passionfruit seed for sell. I will be ordering some more seed tomorrow. I have signed up for your email postings. I am looking forward to them. Thanks for your articles I happen to live about sixty miles north of Birmingham Alabama.

I haven’t been able to get Maypops yet but I found a local farm/Nuersery here in Grand Bay, AL that are growing purple pashionfruit, Chief Kubo’s Prize south sea salad trees and White Jade Pineapples among other things. Excited to have a local source for rare plants and I got to talk a bit with the owner, a really nice guy. I have oaks that I can let the purple passionfruit climb but I’m wondering if it would be alright to let them climb a fruiting tree later if I decide to take out the oaks. Are the vines too vigorous for that? I don’t want my fruit trees to get choked out. I had originally thought about letting them run our fance but I’m afraid that the winter would kill them exposed like that, even with mulch on the roots.