Growing pawpaws from seed; plus, amazing facts about pawpaws! 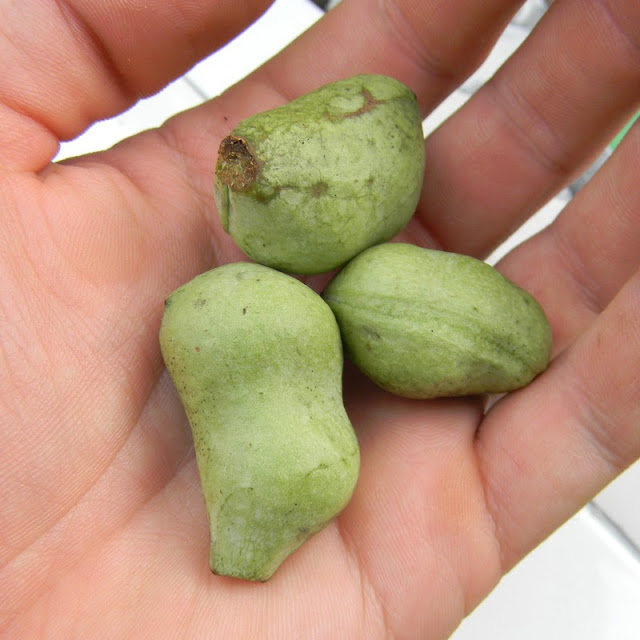 In my neck of the woods, native pawpaws are ripening, however you have to be fast to catch them, particularly in the case of the short shrubby varieties like Asimina pygmaea.

Last week, my friend JJ brought over three little fruits from a wild pawpaw on his property. They weren’t completely ripe, but hopefully they’re far enough along to have viable seeds. Obviously, teeny little pawpaws like these wouldn’t yield much in the way of edible fruit – but there are like, a ton of other good reasons to plant them. Here are 23, right off the top of my head.

1. Pawpaws are sort of rare.

2. The fruit look like those pods from Invasion of the Body Snatchers.
3. The zebra swallowtail eats them.
4. People will be like, “Whaa… thas a pawpaw? Lol WUT? F’real?
5. Every time you plant a pawpaw, the FNPS receives a dollar. (This is a lie. In fact, what REALLY happens is that I mail them an air potato. TRUE!)
6. Pawpaw trees are easier to grow than peaches.
7. Gopher tortoises like pawpaws.
8. Pawpaws can cure cancer. (I think.)
9. Teeny little pawpaws look much more refined than big bloated grapefruit.
10. People overseas in many places like the Iraq and such as can’t grow pawpaws.
11. Chuck Norris once frowned at a mango tree. It picked up its roots, moved north and became a pawpaw.
12. My friend Terri owns Pietro’s Pawpaws. If I don’t mention pawpaws positively, she might kill me with her mind powers.
13. Pawpaws don’t look like a fruit tree.
14. Pawpaws are pollinated by flies. Do it for the flies.
15. Pawpaws will never say they’re going to be someplace, then never show up and leave you hanging for hours and wondering if true love will ever find you. This is because pawpaws can’t talk.
16. Pawpaws have taproots that are 6′ long. Don’t you want a plant with a 6′ taproot?
17. Pawpaws won’t get stolen during the Econopocalypse. Looters won’t know what they look like or if they’re edible. Of course, you’ll still starve, but at least you’ll get a bite or two of pawpaw first.
18. You need to grow pawpaws because I do, and I’m amazing.
19. See above.
20. A Rabbi, an Irishman, a blonde and a pawpaw walk into a bar… and the pawpaw is the only thing that walks out without being stereotyped.
21. Pawpaws can shoot their spines over 50′.
22. Pawpaws bring a piece of native Florida to your yard.
23. Pawpaws are going to outlast the Dow Jones.
See? Don’t you want a pawpaw now? You do? Then here’s a helpful video on how to grow them from seed!
Keep your eyes open for ripe fruit, and if you’d like to learn more about pawpaws, check out the two-part interview I did with Terri Pietroburgo some months back.
Pawpaw Interview Pt. I
Pawpaw Interview Pt. II
Incidentally, if anyone has had luck growing their own pawpaws from seed, let me know – I’ll happily post your success (or failure) stories. As you know, I’m a huge fan of growing trees from seed.

Did you ever get really tired of a particular type of animal?

The Case of the Missing Leaves

Where was I when living in Florida. Never heard of this pawpaw. Very intriguing.

They're really not all that common. I only found out about them thanks to Terri.

I have tons of the smaller varieties and have tried to eat the fruit numerous times..how do you know when it's ripe? I have never found one that tasted good yet, and I'm not picky! They ARE beautiful though…

Well.. the really little ones that I tried smelled better than they tasted. I think the shrubby little pawpaws really aren't worth eating. However, I've heard Asimina Parviflora is really good. I have two but they haven't fruited for me yet.

In Chuck Norris's world, every zoo is a petting zoo.

Behind Chuck Norris' beard isn't a chin. There is only another fist.

I purchased seed for those tall northern pawpaws (mail order).
I planted them in pots (outdoors) as soon as the seed arrived…
Then set out the babies when they eventually came up… In the clay, the trees are flourishing… The ones planted in the sand… mostly died. I do still have a couple in the dry sand that haven't died, (yet).

The fruit on the dwarf trees (naturals), isn't ripe yet… I intend to plant the seed as it ripens.

I recently transplanted some baby dwarves… they seem to be doing well… so far…
Pawpaws aren't supposed to be transplantable… Interesting that your friend is moving those large specimens.

Very good to know. Where did you buy the seeds? Seedman.com?

Glad you were able to get some to take. Interesting that they preferred the clay.

Good luck with the transplants. The way Terri does hers looks like an archeological expedition. The taproot is apparently key.

Just bought 12 seeds on Ebay of ASIMINA TRILOBA as an experiment. My concern is that I will not have enough chill hours for them to fruit in central Florida.

That's my kind of experiment. I know Florida is the bottom of Triloba's range. I'll bet it works, though. I once saw a pecan tree growing happily in Hollywood.

I think I just found 3 pawpaw trees in my yard, and I live in town! I thought they were weeds, luckily I didn't pull them. I've blocked them off so hubby won't mow over them. I wonder what variety they are. I've emailed Terri to verify if that's what they really are, here's hoping. BTW, love your list of reasons LOL!

Kerry – that's fantastic. Good find! I'd love to know what she says – and send pics.

Hey, It's Robbie again. I work with FWC and I collected some native seeds here in June from upland pines area. We have kept them in a "dry" spot in the greenhouse here. I really got to chill the native ones? The ones in the video still look like the northern variety. I will try one now in June, and we can see how it does. I can put the others in the fridge here at work.

No – you don't need to chill the native ones; however, you need to plant them fresh without letting them dry out. They lose viability rapidly.

No – I like to use many plants in my gardening, including “invasives.”