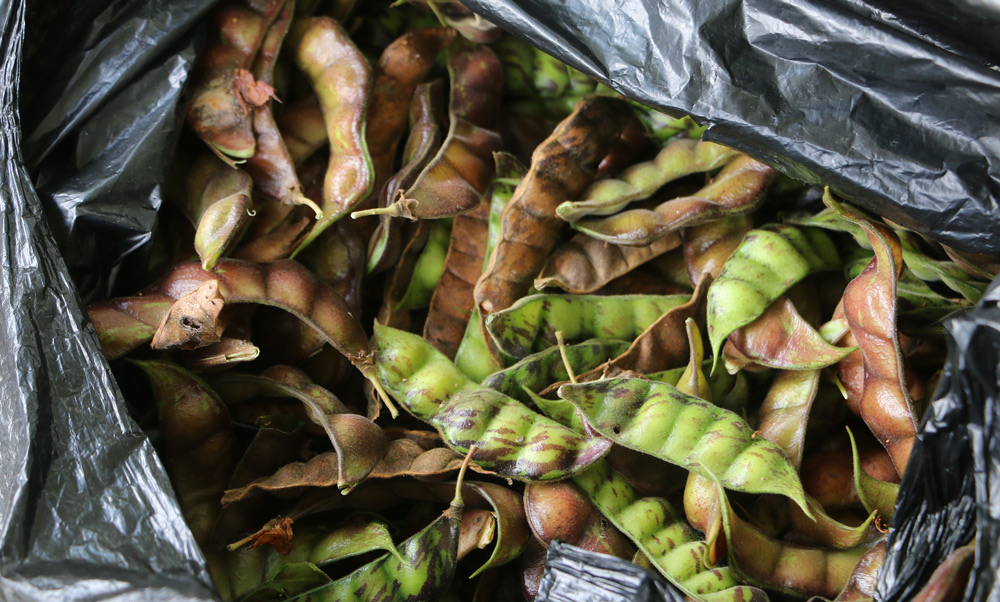 Last year I shared Deborah’s success story with growing pigeon peas in North Florida and also wrote about my lack of success.

Pigeon peas are an excellent multi-purpose plant if you can grow them; however, they are a truly tropical species and do not like the cold at all.

When I was living on Grenada I had great success growing them and used them as a ground cover/nitrogen fixer on newly cleared ground, interplanted with grain corn.

Yesterday I got another comment on my post about pigeon peas in North Florida, this time from Marquese Dillinge,r who writes:

“Well I’ve been growing pigeon peas for several years north of Gainesville, small town off I-10. I haven’t had much of a problem growing them without much additional care. They did freeze pretty hard here recently — but two of the plants are 3 years old, and have fared thru previous winters fine. I have some additional plants in another location(that are 4 or 5 years old) under a high canopy that were unfazed by the freeze that has defoliated my other plants(more exposed location). These plants we received from a friend, they are several years older and have gotten no special attention over many years. I used to go harvest her plants for years before I planted mine. I am eager to explore cultivars but the letter-number names don’t have descriptions.”

Frost protection of some sort seems to be key, as is the selection of variety.

As I wrote back:

“Good job. The years I grew them we had some nasty frosts. One night was 12 degrees. That was back in the early 2010’s somewheres, which made me give up on them. You’re right that the different cultivars are a pain to figure out. They need nice names, like “Early Gold,” or “Fat Sally’s 5-In-A-Pod” or something like that, where you know what they are.”

Whatever variety I was growing back in the early days of my North Florida Food Forest would not go into bloom until November or so, set pods slowly due to the cold, then those pods would freeze off in January or so before ripening. An earlier variety would be a big help.

These pigeon peas I photographed in Bay Minette, Alabama were blooming in August: That is better! I’ll bet they made some decent pods before our first frost at the end of November.

The variety that I was growing before came from an Indian grocery so it was probably a type from the deep tropics with a longer season. I should ask the folks that own the peas above if I can have a few seeds.

Though even if you don’t get to harvest peas, pigeon peas could be a great warm-season addition to a new food forest project thanks to their abundant growth and the nitrogen they fix. Shorter season varieties would just be a bonus.

Glad to see you guys are all ok. Caught just the very end of the stream just now. Suspect I have that same bug though today managed to get some work done. Still tired fast, but not like a few days ago.

I plan to plan some pigeon peas in the spring. I got seeds from a Texas breeder that is working on more old-hardy varieties. Their specialty seems to actually be cotton, but some google-fu (well, some ducking, actually) turned them up. I hear the Us in the area are working on them too. Not sure if It was GA or FL.

I want to try the peas in a hedgerow with black locusts than I will pollard. Going to aim for some rows of trees kept low enough to not shade out a couple beds between the tree rows, hoping for enough shade to make growing in summer more doable (mostly on ME), but not so much to inhibit growth. May drop in a few mulberries too.

Waiting on that second edition you’re working on… 🙂