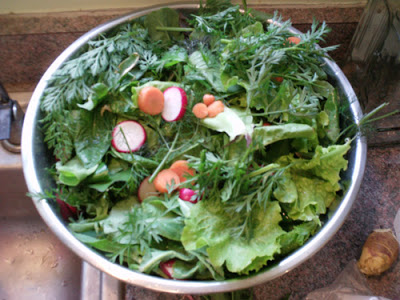 Grow your own herbs and you may avoid serious food poisoning:

“While most Americans are convinced that handling raw meat and dairy puts them at the greatest risk of food poisoning, it’s produce that actually causes nearly half of all foodborne illnesses, according to the CDC, while meat and poultry are guilty in just 22% of cases. So just sprinkling fresh cilantro, parsley and basil on top of your dishes without washing the herbs first could be exposing you to dangerous bacteria.

There were nine foodborne bacteria outbreaks linked to basil, parsley and cilantro that sickened almost 2,700 Americans and sent 84 people to the hospital between 1996 and 2015, so the FDA started testing these popular seasonings that are often served raw for listeria, salmonella and E. coli last fall. And the preliminary report analyzing 139 herb samples found that four tested positive for salmonella, and three had E. coli. All of the contaminated herbs were sourced from outside the U.S.“

Fresh herbs are easy to grow at home, even if you live in an apartment. They’re a high return on investment and many are perennial, giving you fresh leaves for years. I have herbs growing on my porch right now – and this reminds me I should plant some more.

An Unconventional Use for Snails
I'm with the Swiss
Turning coconut shells into charcoal
Brushing your teeth with a twig, Kenyan style
I Smashed My Earth Oven!

Should you plant on mounds in a dry area?

How to Eat Noni Fruit

Make Your Own Live Fermented Pickles (A Very...

How to Pickle Radishes with Traditional Live Fermentation

This reminds me I ought to finish writing up a post on companion planting with herbs. Herb Quarterly ran an article in this season’s issue, plus I have both of Louis Ricotte’s books on the subject, and at least one more of my books on growing herbs includes that info. Hopefully, tomorrow … I have a bunch of errands today.

When you do, send me a link if you like and I’ll give your post a plug.

Cool beans, man. It might be another day – ’tis Plant City strawberry time, and I just picked up a flat for the year’s strawberry jam. I now have plans for tomorrow! LOL