Higher Plant Density Lowers Maintenance and Adds Beauty: Landscaping Before and After 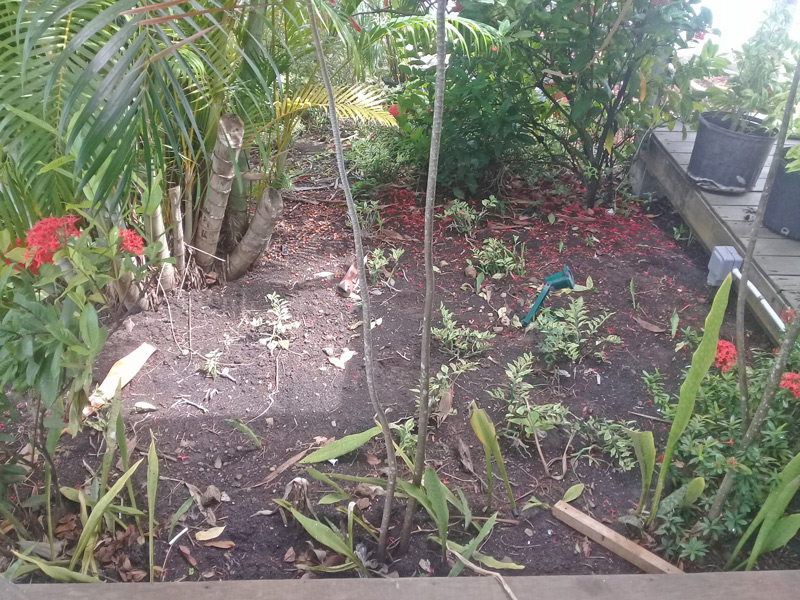 Last week I tackled a new landscaping project: a small, neglected landscape bed at the edge of a restaurant.

The outer edge had some struggling succulents in it, so I pulled them out: To replace them, I added wandering Jew, a fast-running, tough perennial. I found a bunch of them growing in the jungle along the entrance to a nice neighborhood and took cuttings. That will grow into a thick mat of green before too long.

At the edge of the restaurant deck was a shady and very patchy area that needed serious help. Here are the before shots: And the after shots: The density will increase over time as the plants grow. In fact, they’re planted a bit close right now. The restaurant was closed for just a week for renovations and the new management wanted it to look good right away, hence the closer plantings.

The little red plants you can see towards the left are a huge-leafed begonia that likes the shade. They’ll look a lot better once they grow. Right now they’re tiny.

After taking the last set of photos, I added mulch to the area and it looks excellent now. Nothing edible in the mix (the monstera you can see peeking out in the back was later moved), but this is deep shade and also near the sea, so it’s not idea for much of anything that would both make food and look good. I spent about $187USD on plants to get nice, larger specimens. In the middle, I planted some small heliconias and ornamental bananas I found growing in the shade at one edge of the property. I also added the frilly leafed aralia in the middle, which I found elsewhere.

I like the final effect. Density makes a big difference in maintenance and looks, as it keeps the weeds down to nonexistent levels by filling in all the gaps where they might show up.

This is my goal for these dead areas in the landscaping.

Thick, lush, tropical rainforest style. When young, the plants will be mulched, protecting them from weeds. Later, they probably won’t even need that.

Thanks for all you do!

Hello David!
I have a question that is not really related to this article but I couldn’t figure out how else to get it to you lol.
So, a little explanation for context first, I live in zone 8b southern Georgia, where the winters freeze but in the middle of winter there can still be some pretty warm days around 75F, anywhere from just a day to even a week sometimes. I believe I saw you post on permies a loong time ago about you having a similar situation when you lived in Florida, and how it was problematic to growing fruit trees due to that warm spell tricking the plant out of its winter dormancy, where I assume it then sprouts and has all that new growth killed by frost the next day or week. However, all I read was just your comment explaining that was your situation, not how it was dealt with or worked around, and I have since lost that thread in the abyss so I can’t find if you elaborated further in the thread about this, so essentially that is my question. I am designing a 1 acre forest garden on my property, but I am finding myself discouraged from planting all the many fruit trees I want due to the worry of possibly losing an entire tree to this climate situation, so I greatly appreciate any information/solutions you could give me on how you worked with this, just how ‘dire’ a situation it is (could I lose the entire tree/plant or just the blossoms or something), and if you happen to know if this would even really be a problem in my particular climate zone, because there are large pecan groves just down the road from me and 100 year old pecan trees all over the place that seem to be thriving, as well as large smooth sumac’s and blackberries all over my property that all do well, so part of me suspects that my trees will do just fine but I want to at least prepare myself for this before I start planting, so again I am appreciative of any information you could give me on this, thank you!

Gabe – glad you found me again. Since that thread, I wrote an entire book on it: https://amzn.to/2PcVWuB

You will almost certainly lose trees, especially if you are starting from grass. The first few years are tough until you hit a certain level of density where a microclimate is created. If you have some trees already there, leave some of them for help.

You con’t do much about the warm spells inducing blooms. I got around it by planting trees with higher and lower chill hours than recommended. That way you get fruit after cold winters and after warm ones.

Thank you! That’s wonderful, I literally just put your book on my amazon wishlist yesterday, now I HAVE to get it!
But, just to clarify, should I only be worried about the tropicals I am “pushing the zone” with dying, and not the native or temperate trees like red mulberry, paw paw, peaches, etc.? Because essentially my main concern was am I going to lose a whole peach or persimmon tree or anything that ‘can’ generally grow in zone 8b to a weird warm spell in mid December or January? If I only lose blossoms to the weird warm spells, that I am prepared for and have some good ways to combat thanks to the friendly folks on permies, I just want to make sure this phenomena isn’t going to take down a whole tree with it!

You will likely only lose some blossoms and new growth. I had that happen multiple times with peaches, pears and other fruits. They snap back.