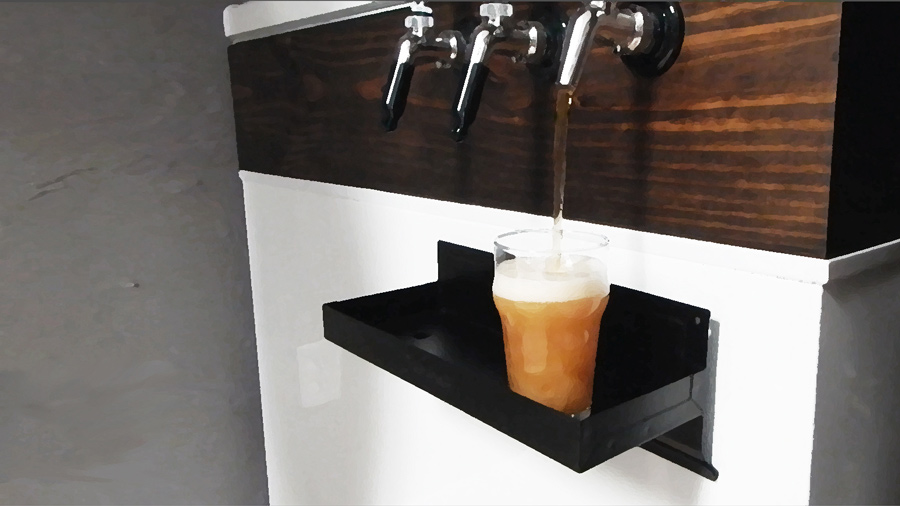 This is the coolest homemade kegerator I’ve ever seen: That kegerator is made from a Craiglist chest freezer, with a magnetic tool tray, custom stained wood, taps that have yeast vials as handles… it’s amazing.

What – your pastor doesn’t have an awesome homemade kegerator? And he says beer is bad??? Shame!

Not my pastor – he’s REFORMED!

And has a deer head on the wall. I joined Redemption OPC Church in Gainesville a few years back.

I originally joined for the theology and their practice of including children in all the services, rather than shipping them off into classrooms or the nursery.

Yet the people are one of the greatest thing about this church.

I was at my pastor’s home for lunch on Sunday afternoon and asked if he’d mind if I recorded his amazing home brewing setup.

He agreed – and agreed to lead the tour… so here’s

The beer that Pastor Joel makes and stored in his homemade kegerator is amazing stuff. Very, very good. And as he covers in the video, he’s brewing a special homemade recipe named after our church.

Now I’m not all that good at homebrewing. I really don’t drink all that much beer, but I like the idea as it ties in at least tangentially to self-sufficiency.

In my new book Grow or Die: The Good Guide to Survival Gardening, I write a bit about how a still works (and include an illustration), plus I tell the ridiculous story of how I made alcoholic “beer” for my friends as a little kid.

But I have another story for you today.

A little while before I started this blog, I did have a multi-month run of experimenting with malting grains and brewing beer.

My original goal was to grow my own grains, make my own malt and brew beer in a grid-down apocalypse setting. Then I could trade it to desperate alcoholics for gold jewelry and bass boats. I should have paid attention to this book

And I ended up with beer that tasted like boiled onions and watery white bread.

I still drank it all eventually, because I’m cheap.

The boiled onions part wasn’t the fault of my process. Instead, it was the fault of the fermentation vessel I used: a recycled food-grade five-gallon pickle bucket from Firehouse Subs.

I had no idea the pickle flavor would be absorbed into my wort so completely, or that it would pick up an ugly oniony tang along the journey from malt to bottle.

I got a really good book on the topic: The Complete Joy of Home Brewing by Charlie Papazian… and then didn’t really follow much of what it said because I was looking to minimize everything down to complete simplicity.

I also found that home brewing led to marital friction.

That mostly came in the area of making malt.

Malting grains is simple in concept. All it requires is for you to sprout some grain, let it grow just a little so the starches in the seed are converted to sugar via enzymes, then dry it out.

To do this, I pressed all of my wife’s cooking trays into service, covering them all with damp grains and placing the trays all over the kitchen counters. A couple of times a day, I had to wash the grains by rinsing water through the trays carefully, then I’d replace them on the countertops. In a week, we had sprouts everywhere. It was awesome… but Rachel really didn’t like not having any cooking trays or counter space.

Fortunately, I knew I’d be able to buy her back with promises of gallons of beer.

Except Firehouse RUINED that plan!

In order to actually dry the malt, I took the trays of grains and cooked them on very low heat in the oven until the little sprouts were crispy dry, then roasted them at a little higher heat until they were the mid-amber color I wanted for my beer. I then ground them in my trusty Corona grain mill into a nice, fine malt.

From there I followed most of the directions in the book, waited an appropriate period, racked off, bottled, etc…

…and got my boiled onion brew.

Yeah, it’s a lot easier to just buy a straight-up beermaking kit, but I can’t ever do anything the simple way. And Mr. Beer ISN’T going to be there for us during TEOTWAWKI!

If I was dedicated like Joel is, I’d also do a lot better. I ultimately made three batches of beer, including malting my own grains, and got one batch that was almost drinkable.

Maybe one day. And then I’ll build a homemade kegerator. And get a deer head for the wall.

Food Forest Before and After: Overhead Edition

Dammit, you keep posting this cool stuff and I have to keep doing it…. I’m tapped out man!

You could have used the onion beer for cooking…beer batter and stuff. 🙂

Wow, that’s probably the best homemade kegerator i’ve ever seen. What’s the cost and time investment for this sort of thing?