How Dumpster Diving Turned Me Into a Spud Freak 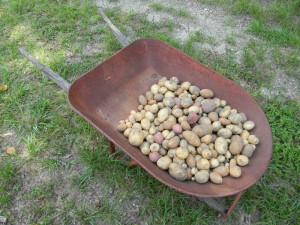 Long ago, before I saw the light, I didn’t grow potatoes.

Potatoes come from the store in big, cheap bags. Why would I bother growing something so inexpensive and plebeian when I could grow delicious foods like tomatoes, peppers, herbs and garlic?

So for years, I didn’t plant potatoes.

Until the year I met my friend The Professor. He was a respected teacher at a venerable private college, married to a professional woman and living in a nice house in the suburbs.

He was also a secret dumpster-diving addict. And we’re not talking hitting the trash for furniture and pallet wood – no, he was after big game. Just-expired expensive cheeses, flats of frozen beef, organic berries and whole-grain breads from the boutique grocery. Frankly, the profusion – and sheer dollar value – of what he retrieved blew my mind.

What does that have to do with potatoes? Well, one time, after making me swear not to reveal his secret identity, he took me along. We careened through back alleys in his car, lights off, gloves on, tipping the lids of dumpsters and keeping our eyes open for both unsavory lurkers and local sheriffs. It was a rush, yet the thing that really struck me about the evening was how much food we waste as a nation. One of the foods we found scattered about in profusion were potatoes. He told me he didn’t even bother picking them up most of the time; but me, being a gardener and seeing many bags of potatoes covered in eyes and young roots, couldn’t resist saving some to plant in the backyard.

So I did. I dug a long bed, buried the dumpster potatoes haphazardly in the early spring and waited. A few months later, I pulled up baskets of spuds in all different shapes and colors – and discovered something unexpected.

Imagine the best French fries you’ve ever had… then double their
rich, crunchy flavor. Picture a bowl of steaming mashed potatoes… and
imagine that they have as much (or more) sheer deliciousity as the
savory gravy ladled over the top.

Since that year, I’ve grown potatoes every chance I get. Down here in
Florida I don’t find them to be remarkably productive, but they’re more
than worth having in the garden. Dinner guests are consistently amazed
by the velvety richness of our homegrown spuds. They’re so good, we
sometimes serve them as the main course.

So – how do YOU grow YOUR own deliciously incredible spudtastic potatoes?

First, find yourself some seed potatoes. This is easier than you might think. People will tell you emphatically, “Don’t plant store-bought
potatoes!”

They then mumble strange phrases like “viral contamination”
and “sprout inhibitors.”

Though it’s true that some potatoes for sale in the grocery store
have been coated in chemicals to keep eyes from forming, I’m 99.7%
certain not all of them have…

(CLICK HERE to read the rest over at The Prepper Project)

UPDATE: You can grow grocery store potatoes – check this post out.