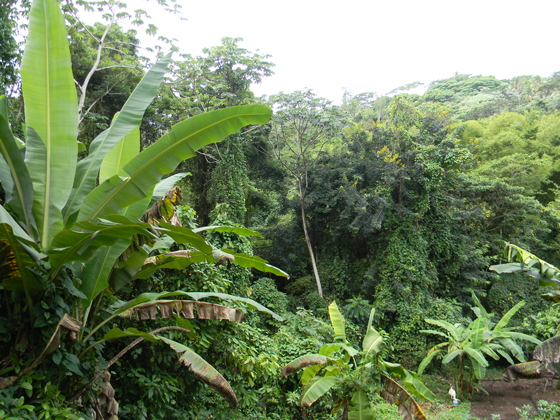 Food forest density is a GOOD THING! This photo is at Pilgrim’s Farm – a very productive homestead.

Why is it that we find wandering through a lush woodland a wonderful thing… yet fight against lush growth on our own properties?
In our yards we seem to have disconnected ourselves from natural ecosystems. They’re scary I suppose. I mean, what would the neighbors think?
Our gardening is feeble and contrived, as if we’re making mudpies in God’s driveway.
We clear and cut and till and plant at extension-approved intervals and spacings.
Some time back I created a big post at my site on growing fruit trees from seed. One of the responses I get when I talk about seed-grown fruit is “what if some of the trees make crummy fruit? I don’t have space to grow trees from seed, only to have some of them turn out to be lousy!”
Trust me, unless you’re in an apartment… you have some space for seed-grown trees. Even for ones that don’t turn out well.
How’s that?
Look – trees don’t need as much space as you think they do – and trees with lousy fruit can always be grafted or cut down and composted. Or used to fuel a smoker or barbecue. Or cut and inoculated with mushrooms. Or cured and used for woodcarving.
We’re just too tentative in our gardening. Yes, sometimes you might plant things too close and end up with a tree (or three) that’s too shaded or too strangled… but you might be surprised how tight your spacing can get before a tree becomes completely unproductive.
Beyond just the trees, adding a larger number of plant species (basically packing in lots of biomass!) will help build soil and create a lush and resilient ecosystem.
I have seen multiple food forest projects that miss the benefits of density. They’ve made the transition from standard annual gardening to a more permaculture approach; yet they look more like an orchard without straight lines than a species-rich forest edge.
It’s fine to start by planting trees and mulching away the grass around them – but once you’ve got those trees as scaffolding, don’t quit! Build density and you’ll get more food and have less work in the long run. Food forest density is your friend.

Planting Around the Base of Trees

I use larger trees as shelters for my less cold-tolerant species. I’m growing guavas and pineapples in my front yard around the trunks of some large oak trees. Despite winter temperatures that occasionally reach down into the teens, they don’t freeze to death. If I planted those pineapples out in the open, they’d be toast. The increased density of my yard allows them to grow where they normally wouldn’t.
Some trees can also support climbing species. I’m growing yam vines up a small sweetgum seedling that popped up in my food forest. The tree grew rapidly and I considered cutting it down to replace with something edible… then I realized I should just take advantage of its quick growth and non-productive nature. I wouldn’t grow yams on my prize Hachiya persimmon tree… but on a sweet gum? Who cares!
If you add nitrogen-fixers, nutrient accumulators and pollinator-attracting plants around your fruit trees, you can support those trees better than you could with just mulch. I also like to plant herbs, leaf crops, sweet potatoes and wildflowers.

Letting The Seeds Fall Where They May

Sometimes I play seed fairy and throw handfuls of seeds all over the food forest. When I’ve got more time, I make seed balls and chuck those around.
Did weevils get into some of your dried beans? Don’t throw them away – throw them in the food forest! The resulting bean plants will feed the soil, even if you never harvest them.
I once gave my children a bunch of old beans and told them to go have a bean fight in the front yard. Not only did they have fun… they also scattered nitrogen-fixers everywhere!
Throwing seeds around lets nature pick and choose what works and what doesn’t. I like a mix of flowers, brassicas, beans, grains and assorted tree seeds. Sometimes you’ll have seeds coming up a year or more after you threw them. I can never remember what the heck I’ve planted so I’m often surprised by what pops up.

Plants can be expensive. When you spend $25.00 on a tree, you don’t really want to jam it into a shady corner and hope it survives.
I think economics are part of the reason some of the food forests I see are so regimented. The spacing, the watering systems, the perfect mulch circles – they make sense when you’re protecting an expensive investment.
I used to worry a lot about my trees. Now that I have a nursery and do a lot of propagation, I don’t worry as much.
When you start your plants from seeds and cuttings, they’re more expendable. You just don’t have that much money out there. It costs pocket change for decent dirt and old coffee cans and milk jugs can be pressed into service as pots.
Buy a couple of healthy plants from nurseries, then start a lot of babies from those initial purchases…
(CLICK HERE to read the rest over at The Prepper Project)