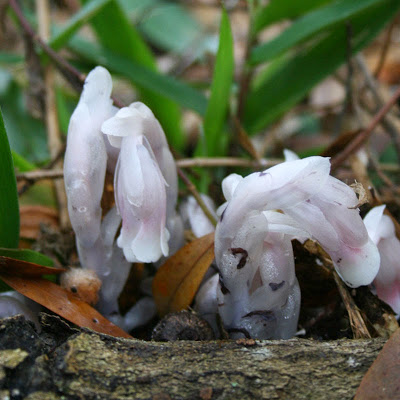 I was walking through the woods with a few of the children when my daughter suddenly called out.

“Dad! What type of mushroom is THIS?”

She was pointing at a strange cluster of white growth emerging from the ground. As I took a closer look, I realized it was a strange wildflower I’d only seen in guidebooks: the Indian Pipe, also known as the “Ghost Plant”, or most properly, as Monotropa uniflora. Unlike normal plants, the Indian Pipe doesn’t produce chlorophyll, which means it doesn’t take its energy from the sun. Instead, it seems to be a parasite on specific mycorrhizal fungi that co-relate with certain trees.

That means a tree gets energy from the sun, shares it with a fungi connected to its roots, then the Indian pipe connects its roots to that fungi and steals some of the energy its receiving from the tree.

Now that’s an amazing design – and it’s also the reason you don’t see Indian Pipe plants very often. They like rich soil, mature trees of specific species that must also be interrelating with specific fungi or the plant cannot grow.

I’ve been looking for one for a very long time. In this particular patch of woods I found four or more additional clusters of Indian Pipes after my daughter spotted the first group. Here’s another picture I took: No matter how long I wander the woods it seems there’s always something new to see.
According to some sources, Indian Pipe may edible. Other sources claim it’s medicinal. Since it’s so rare, I won’t be harvesting them for any reason. Instead I’ll just take photos and marvel yet again at the strange wonders of Creation.

To start searching out your own wildflowers, I recommend the Audubon Society’s guide – it’s excellent.

That’s where I first saw the Indian pipe.

Wow. That is really cool.

Pretty amazing for sure.

I've always been fascinated by these plants. I saw my first one in the Blue Ridge mountains a couple of years ago. There's a similar parasitic plant found out here called Beech Drops, that grows on the roots of beech trees. It's not nearly as striking, and easy to overlook.

Years ago, back when the dinosaurs roamed the earth (according to my kids…), I spotted Indian Pipe, not knowing what it was. A couple of days ago, I ~finally~ ran into it, again, finding *tons* of clumps/colonies of them on the Beaver Meadow trail in Lake Wissota in Western Wisconsin. This just popped up randomly, and since I’m a big David the Good fan, had to check it out! ❤️ <