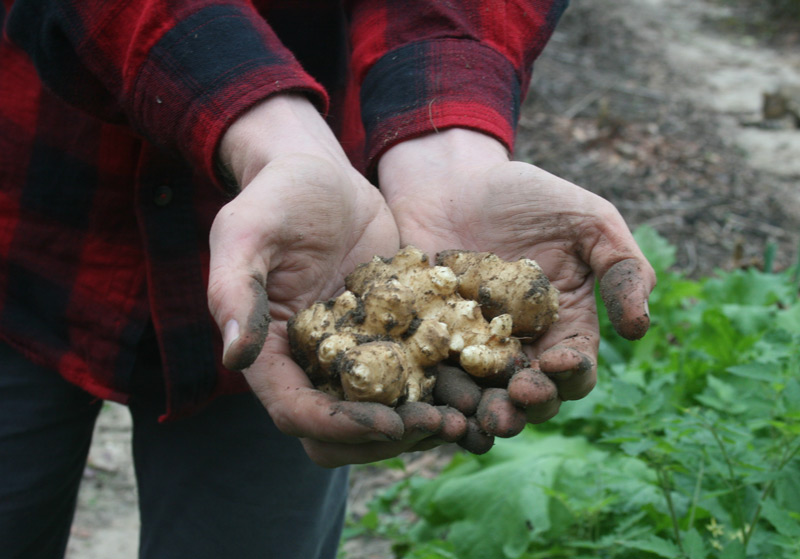 Jerusalem artichokes look like they’d be a perfect prepper survival food crop. The roots grow in poor soil, can take extreme winters, are borderline invasive and are abundantly productive with no care.

When I first planted Jerusalem artichokes back in my Tennessee garden, I thought they would be the perfect temperate survival crop equivalent to cassava, my beloved tropical survival food crop.

I planted them with the help of my daughter Daisy, who was two at the time. I dug holes in the hard clay and she tossed a tuber in each hole. Then we covered them over for the winter. 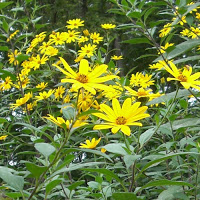 The next year we had an abundance of tall, beautiful Jerusalem artichoke plants. In fall, they burst into glorious bloom.

I cut flowers for the table, and we awaited the frost so we could dig our first tubers.

At some point in November or December, the cold came in and killed the top of the plants. It was time to harvest!

With excitement, I started digging, pulling up a bucket of tubers from each gigantic Jerusalem artichoke plant.

I was right! They were a great temperate alternative to cassava! An easy, no-care, productive root that could keep us alive through societal collapse.

We scrubbed the clay-covered tubers clean and I sliced one up to try raw. The flavor was pleasant, nutty and little sweet. I decided to slice and sauté some in butter and garlic for dinner, which I did, and they tasted excellent!

But then something happened. My digestion revolted against this “perfect temperate survival crop,” and I experienced the worst intestinal pressure I have ever felt.

It turns out that Jerusalem artichokes cause terrible gas. Cassava never caused me such discomfort! My temperate survival crop was a bust. It felt like my stomach was going to bust!

With that in mind, I still plant and grow Jerusalem artichokes. Many people will tell you that their effect on your digestion can be mitigated by fermenting or other special preparation, or by slowly adjusting your gut biome to their consumption.

In a recent video, I harvest Jerusalem artichokes and talk about what I love and hate about this vegetable:

From the few plants we grew, we managed a small harvest of roots. 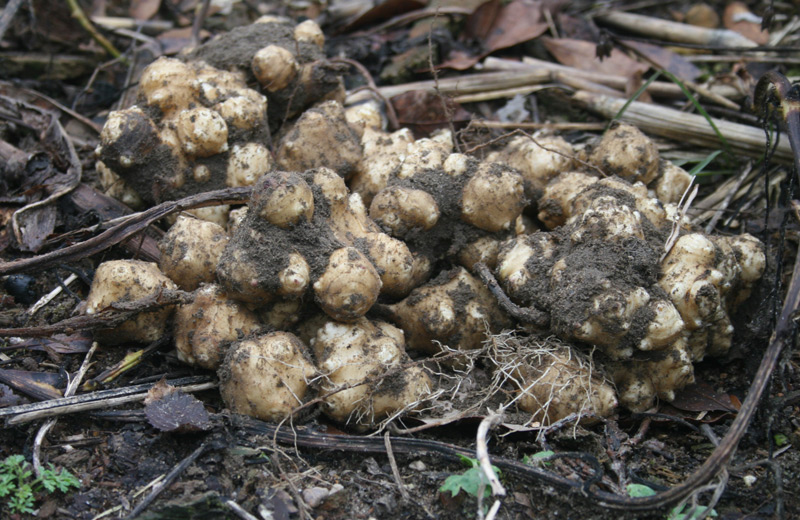 It’s just enough for seed, and not enough to test any anti-gas theories.

I had three sons help me with this video and the photography in this post. CJ manned one camera and ER manned another, while Roger took photos of the process on his own camera. 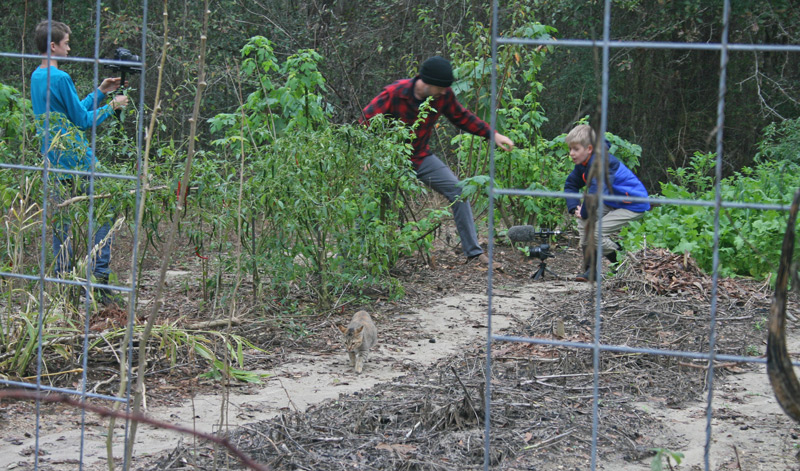 My main camera is now the Canon R6, which is a spectacular camera for video, handling very low light and giving you a stable image. 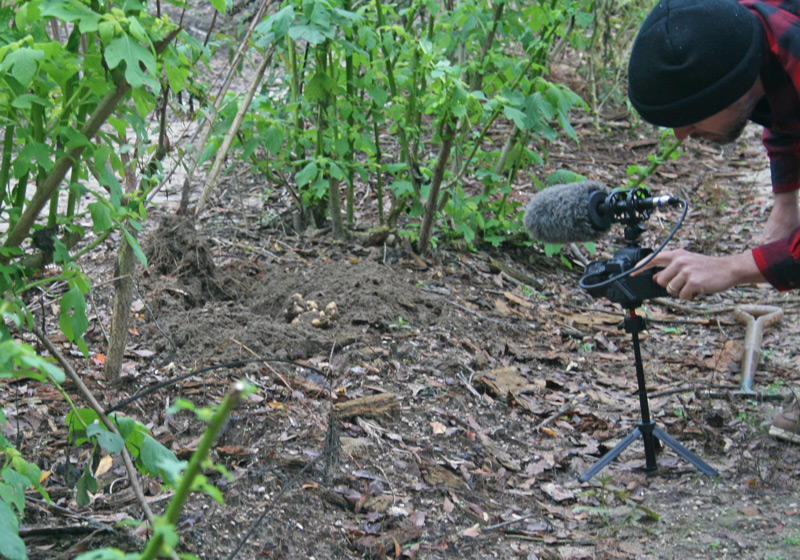 I set that one up for the ground shots, while CJ followed me with the 80D on a Glidecam for the walking shot.

That has nothing to do with Jerusalem artichokes, though. Except that it takes longer to harvest and plant when you are also making a video.

This is the time of year to plant Jerusalem artichoke tubers. They do not store well at all on the counter or out in the open and should be immediately replanted or stored in a somewhat moist medium through winter.

We usually plant them back in the ground immediately. 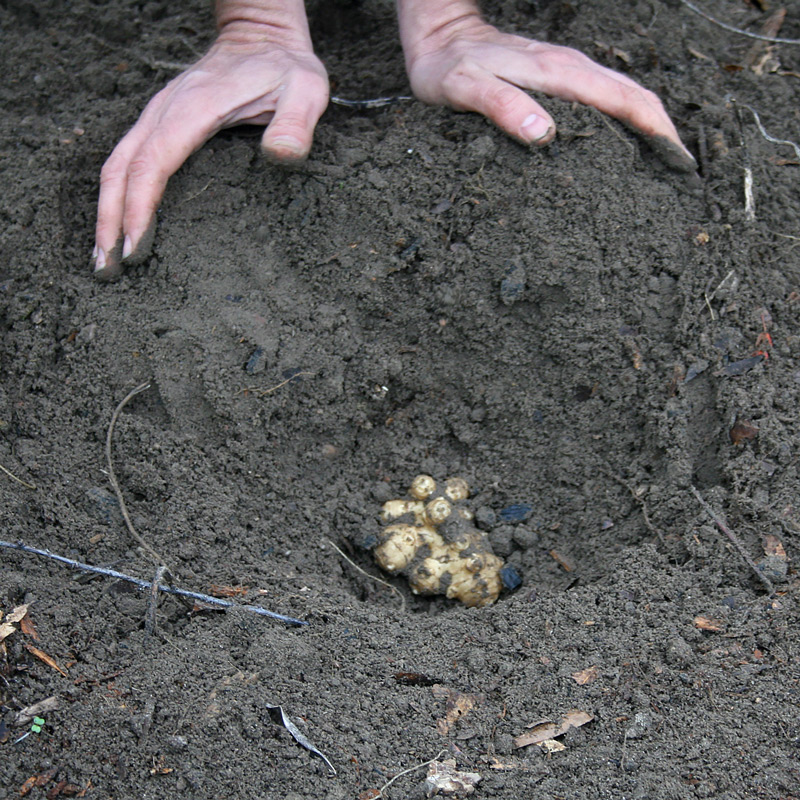 Bury them about 4-6″ deep and let them sleep through winter. In the spring they will grow. Once sprouts start emerging from the ground, the tubers deteriorate rapidly as they are used to fuel the new growth. The time to dig and eat Jerusalem artichokes is during the cold months, between the time the tops of the plants freeze down and the new shoots emerge in the spring. That’s it! Though the tops of the plants can be used as a good animal feed during the warm months. 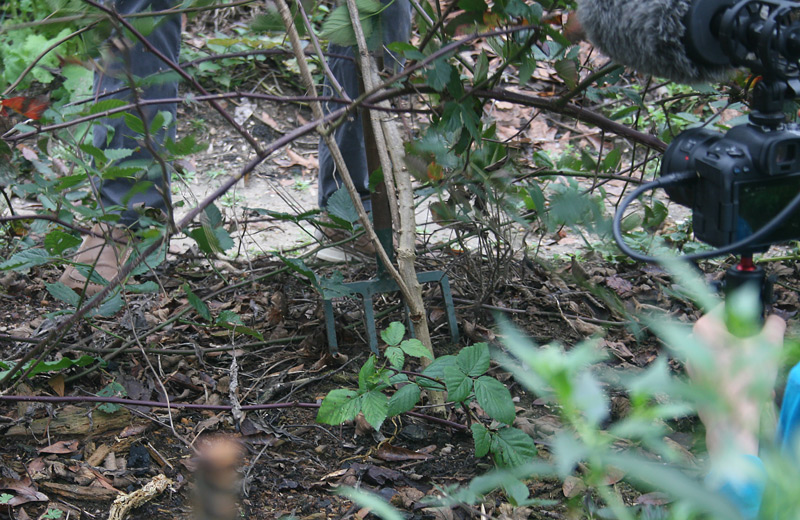 Just dig a little back from the main trunk of the plant so you don’t piece the tubers. The roots cling tightly to the bottom of the plant and the varieties I’ve grown do not spread out much from the base. 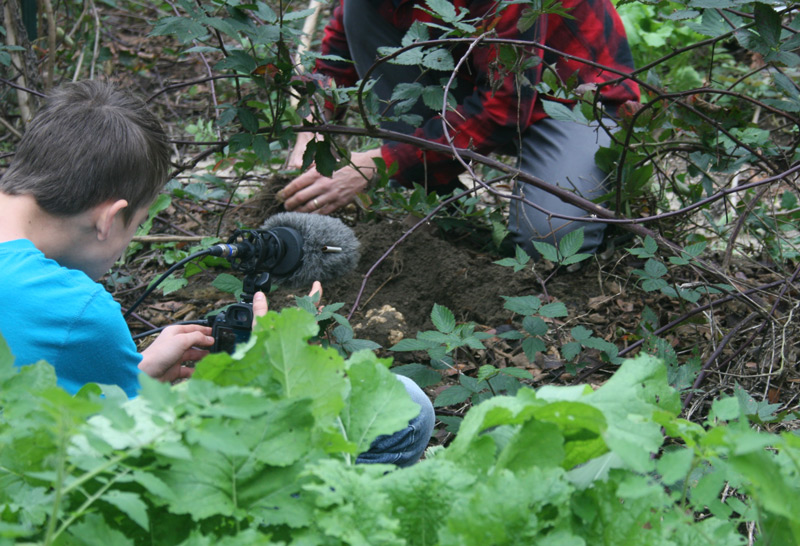 Next year I hope we harvest more, so I’ll have more to plant. I like to grow the roots and replant them, since it’s easier on the digestion than actually eating them.

Next year we’ll have to try fermenting the roots. That sounds like a good option. Rachel already makes very good ferments from cabbages, beets and radishes.

It’s not hard, and if it makes this vegetable digestible, I may have a little less hate and a bit more love for the darn things.

Hope you all had a Merry Christmas. Today we’re going to plant some more ginger, and as always, I’ll film a little video and take you along.

7 Ways To Cut Through Seed Catalog Confusion
Sugar cane harvesting
@The Prepper Project: Why You Should Make a Mess Of Your Garden
Dandelions as a Survival Food?
Living Fence
5 comments
PinterestWhatsappEmail

A New Way to Preserve Tomatoes?

@The Prepper Project: How to Grow, Preserve, Harvest...

I grew them for the first time year (8a SC). I was underwhelmed by the tuber size when I dug them earlier this week and am a little afraid to eat them. Maybe I’ll just stick them back in the ground – the stalks do make some biomass for my compost. Hope you’re all doing well after the recent addition to your family.

Oh I do love a good fartichoke story! I had them exactly once and it was just like you described. DELICIOUS, I might add. This hearty unkillable thing is so delicious? And then…. the consequences!

I love Helianthus farterosus. (I never experienced the gaseous side-effects.) I put them raw in already cooked soups as I enjoy the crisp water-chestnut-like texture. Great in salads. I grow them mainly for the inulin content.

I grew some last year (most likely Stampede variety, I ended up having to buy them from Gurney’s and it doesn’t show what variety they have, but that’s what they resemble: white skin and flesh and very knobby) and dug some of them up to see how productive they were and try out what they taste like. The ones that were grown in the regular soil (which is more sand than not in one place, and half clay in another area) were a bit productive; one tuber resulted in probably about a pound and a half of tubers, most relatively small. The ones that were planted in a bed which had been tilled and had old chicken and horse manure incorporated with the local soil were another matter. Each one resulted in at least five pounds of tubers, some gigantic and others tiny, with most of a good mid-size.

As far as cooking them went, I decided to try out making them like mashed potatoes. I tried scrubbing them clean but with how knobbly they were I felt they weren’t really clean so I decided to peel them, then sliced them thin (all of the sections which had red streaks on the inside I also discarded), boiled them in water with a tiny bit of salt until they were softer (which was about twice as long as it would take with potatoes at a similar slice thickness), drained them, then mashed them up with some milk, butter, and a bit of black pepper (they already had salt from the boil water). They don’t mash as smooth as potatoes do, and don’t taste quite the same, but I liked them.

And I made them that way two days in a row, with them being my only dinner item the second day, and didn’t have any indigestion issues with them, so maybe peeling them and/or boiling them for a long time helps with that?

Stick them in a slow cooker for several hours, along with a whole chicken, butter, chicken stock and carrots. The long cooking process breaks down the inulin. Treat them like potatoes as far as cooking time goes.