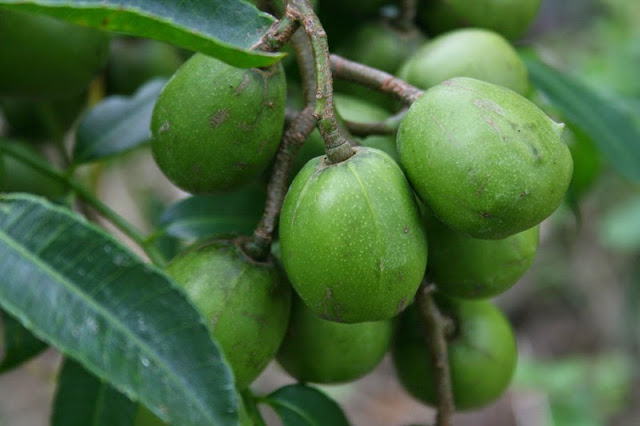 Look at this little guy: This last week when I was planting corn, pumpkins and pigeon peas in the food forest, I was digging a hole for a corn station and I hit a big rock. It was more than just a big rock, in fact – it was a boulder! After some digging and prying and help from my sons, I managed to work it out of the ground, leaving a large hole behind.

Now the hole was too big for a corn station, so I decided it was a good place to plant a june plum tree that had been sitting in my nursery area for way too long.

“The tree is rapid-growing, attaining a height of 60 ft (18 m) in its homeland; generally not more than 30 or 40 ft (9-12 m) in other areas. Upright and rather rigid and symmetrical, it is a stately ornamental with deciduous, handsome, pinnate leaves, 8 to 24 in (20-60 cm) in length, composed of 9 to 25 glossy, elliptic or obovate-oblong leaflets 2 1/2 to 4 in (6.25-10 cm) long, finely toothed toward the apex. At the beginning of the dry, cool season, the leaves turn bright-yellow and fall, but the tree with its nearly smooth, light gray-brown bark and graceful, rounded branches is not unattractive during the few weeks that it remains bare. Small, inconspicuous, whitish flowers are borne in large terminal panicles. They are assorted, male, female and perfect in each cluster. Long-stalked fruits dangle in bunches of a dozen or more; oval or somewhat irregular or knobby, and 2 1/2 to 3 1/2 in (6.25-9 cm) long, with thin but tough skin, often russetted. While still green and hard, the fruits fall to the ground, a few at a time, over a period of several weeks. As they ripen, the skin and flesh turn golden-yellow. While the fruit is still firm, the flesh is crisp, juicy and subacid, and has a somewhat pineapple-like fragrance and flavor. If allowed to soften, the aroma and flavor become musky and the flesh difficult to slice because of conspicuous and tough fibers extending from the rough ridges of the 5-celled, woody core containing 1 to 5 flat seeds. Some fruits in the South Sea Islands weigh over 1 lb (0.45 kg) each.”

It is a BIG tree and the juice is indeed delicious.

We’ll see if I can keep it pruned and under control. My neighbor has one that is a solid 50′ tall. Looking at this little stick of a tree now, that’s hard to imagine. I’ll have to stay on top of it and see if I can keep it from wanting to go straight up like most of the june plum trees I’ve seen. The image I’m using at the top of this post is not from this tree, obviously, but it is a nice reminder of what’s coming in just a few short years!

More news on "Create Your Own Florida Food Forest"
“I Can’t Plant A Food Forest… Where Would The Kids Play?” DEBUNKED!
Prepper Project Article Roundup:
New gardens are in!
Seeds for Generations

From the Inbox: Florida Gardening Failure!

But… what will you do with the boulder?

I put it into my rock wall.