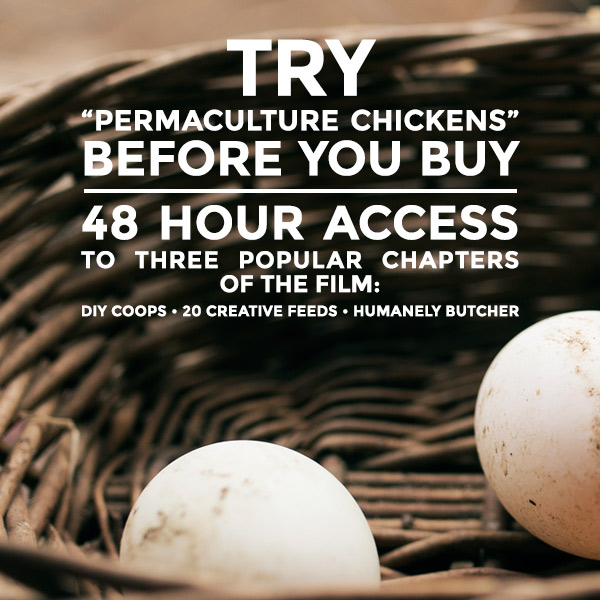 Justin Rhodes’ Permaculture Chickens is the most important permaculture film released since Geoff Lawton’s Establishing a Food Forest The Permaculture Way. He even got Joel Salatin to join him in the film. Impressive.

Chickens are efficient composters (they get their own chapter in my book Compost Everything), a sustainable source of eggs and meat, plus they till and prep garden beds like professionals.

Justin has released three chapters of his film for a very limited time so people can “try before they buy” and see why Permaculture Chickens is worth the very modest investment. The three released segments cover, respectively, alternative feeds (potatoes, maggots, nettles and lots of other crazy stuff), homemade chicken coops on the cheap, plus in the last one Justin demonstrates humane butchering.

Justin is the real deal and a great guy. If you’re at all interested in raising chickens, he’ll save you a lot of money and heartache.

THE VERY FIRST Chocolate Pudding Fruits!!!
Watch out, folks!
Push the Zone is now an Audiobook!
I Have to Kill It
Home!

Moving to the International Shedquarters

When I click on the chickens link it says, “Page not found.”

Thanks for letting me know. The link does do a redirect, so it could be your browser isn’t popping it to the right place – it’s working here.