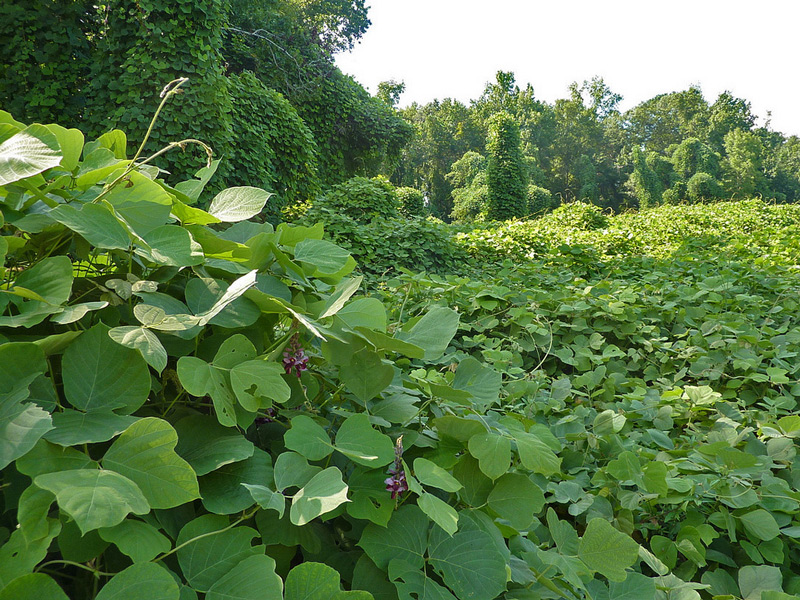 Ah, kudzu. The plant of legends. Gabrielle has it in her yard and wrote to ask how to kill kudzu for good:

“I’m in Northwest Central Florida, near Inverness if that helps and I have a kudzu problem. It was here when we bought this foreclosed property. Any tips on how to get rid of it forever so I can plant a garden?”

If you talk to extension agents and commercial agriculturalists, they will almost invariably recommend killing kudzu with herbicide.

Personally, I hate herbicide and don’t recommend it. The only plant I’ve ever used herbicide upon in recent memory is cogongrass – and only because I needed to get my nursery open and I could not remove it all by hand. If you have cogongrass growing on your property, you cannot have a plant nursery, so I did what the inspector recommended and RoundUpped the stuff.

Kudzu is a different story. Some have reported that it can be removed quite efficiently by hand by using a prong hoe:

“During the first half of 2006, some volunteers started using the pronged end of the 16″ and 26” hand pronghoes as a crown extraction device. The prongs are driven under the kudzu crown, and then the crown is leveraged out. This is much like using a Weed Wrench, or like using a hammer to remove a nail. This approach is moderately successful. About half the time the crown fully separates from the roots, hopefully leaving behind no residual crown tissue that could regenerate into a kudzu plant.

A breakthrough occurred during June 2007 when the Spartanburg Urban Youth Corps worked with the Coalition on kudzu removal. One high school student, Antonio Perkins, liked the hand pronghoe tool, and decided to use it exclusively. Each worker was asked to count how many crowns he or she had removed. When break time came, Antonio reported that he had killed kudzu at a rate of 186 crowns per hour. This was stunning news because the previous record was 120 crowns per hour, and that was achieved under optimum conditions. We complimented Antonio on breaking the record, and asked him to demonstrate his method. He pulled taut the vines coming from an exposed crown, and then chopped below the crown with the hoe end of the pronghoe, thereby removing the crown in one motion. Antonio’s success with this method showed that the slower process of carefully excavating the crown with the pronghoe, and then sawing off the crown, was sometimes unnecessary.”

You can see the sawing method of kudzu crown eradication here:

Because kudzu makes tubers beneath the ground, you have to make sure you get the root. Just chopping down the vines isn’t enough – you need to get the root or your kudzu will return.

If you simply chop the kudzu to the ground, then throw cardboard over the area and mulch over that, you should be able to eliminate all the roots as well.

Bill Finch at AL.com has a very entertaining post about kudzu which includes his thoughts on eliminating it:

“A young student was recently celebrated across the country because he had, in the words of a story appearing on CNN and in The Washington Post, figured out “how to kill kudzu.” His solution was to use a specialized tool to insert vast quantities of helium into the soil.

I applaud his inventiveness, but he, like all of us, has become a victim of kudzu hyperbole: Kudzu isn’t particularly difficult to kill. His research would be far better applied to truly difficult weeds, such as cogon grass or privet.

Now we’re hearing that an invasive bug has begun to chaw down on kudzu, and could reduce its growth by a third. Hooray, I guess. But if kudzu is an annoyance, it’s mostly because we’ve let it become one.

One of the reasons kudzu has never really caught on as an agricultural commodity is that it is, in fact, too easy to kill. Kudzu is unusually sensitive to overharvest, and horses, cattle, goats can graze it out and eliminate it in a year or two.

You can imitate that by cutting the vines back down to the ground, then simply mowing the area every two or three weeks during the peak growing season, just as you would a lawn.

There’s a fairly big patch of kudzu at Mobile Botanical Gardens. I’d been pondering how to bring it under control for several years, until I finally recognized what a great resource all that kudzu could be for starting new gardens.

I’m using it for mulch to create my new vegetable garden. If previous analyses prove out, kudzu is a decent source of organic matter, a good source of nitrogen (pound for pound, much better than manure), and make even reduce the incidence of some soil pests. In a few minutes, I can harvest enough mulch to make a mound large enough to cover 40 square feet of garden three feet deep.

I simply throw that over an area where I want to plant next year, it shades out all of the weeds beneath, and the resulting soil is remarkably mellow and rich.

I’m not in the least worried about the kudzu “infesting” my vegetable patch. Kudzu is difficult to establish from seed, and the cut vines will not take root. If by some miracle any of them did, a quick yank would eliminate them.”

Kudzu is quite high in nitrogen as the plant is a nitrogen-fixer and well known for its high protein content. Champion tomato grower Charles H. Wilber used kudzu in his compost as part of the recipe for growing his massive fruits, as described in his book.

And finally, if you really have trouble with kudzu, why not eat the weeds?

“Kudzu can be eaten many ways. The young leaves can be consumed as a green, or juiced. They can be dried and made into a tea. Shoots can be eaten like asparagus. The blossom can be used to make pickles or a jelly — a taste between apple and peach — and the root is full of edible starch. Older leaves can be fried like potato chips, or used to wrap food for storage or cooking. With kudzu you can make a salad, stew the roots, batter-fry the flowers or pickled them or make a make syrup. Raw roots can be cooked in a fire, roots stripped of their outer bark can be roasted in an oven like any root vegetable; or grated and ground into a flour to make a thickener, a cream or tofu. Kudzu is used to make soaps, lotions, rope, twine, baskets, wall paper, paper, fuel and compost. It can also be baled like hay with most grazing animals liking it, especially goats. Only the seeds are not edible. “

If I had kudzu growing on my property, I’d use it in my weed tea recipe.

Stick a bunch of vines in a barrel, cover with water, let it rot down for a few weeks, then use it to water your gardens.

Gabrielle, I hope this has given you a few good ideas. Thanks for writing.

Careful there. You’re gonna convince some folks to actually plant the stuff! A plant that produces copious amounts of high nitrogen material for composting/mulch/animal forage is tempting, for sure. Hmmmm. 😉

That’s awesome! I knew kudzu was edible, but didn’t have the desire to eat a forest of kudzu. I did not know most of the other information including how high in nitrogen it was and that it wasn’t going to sprout more kudzu if I used it in compost or just left it on the ground. AND killing the crown, I can do that! I am eager to get to the garden and I thank you for answering my question. I might have some tea to brew too:)

I grew up knowing kudzu as The Mile a Minute plant. I’ve lived with it in Alabama, Tennessee and Florida. I wonder about it, though, as livestock feed. I understand, from my elders (as a child) that it was planted for that purpose, but the cattle wouldn’t eat it. Goats will eat a can, but cattle and horses will usually turn up their noses to non-food. We were horse people, back then. Maybe saying the animals wouldn’t eat it was a way to get out of working it? I sure wouldn’t want to have to forage around in the stuff

I tried it on our cows and they ate it. I also think it has a lot of uses, but they really don’t want people planting more!