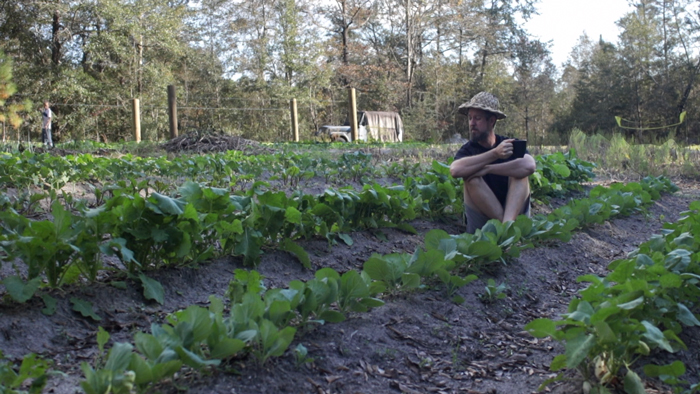 Unless you enjoy complicated gardening methods and buying lots of stuff, I highly recommend looking backward with your gardening, not forward.

Here’s the question: how did our ancestors garden? And why?

They didn’t grow in plastic boxes or in water and gravel beds! Or in pressure treated wood-sided raised beds! There’s really nothing wrong with trying to improve on the wheel, but when you want to get food growing quickly and well, it makes sense to stick with what works.

With that in mind, for the last year I have been planting widely spaced row gardens as an experiment. To my delight, this tried-and-true method has given me decent yields with a minimum of work and input. I don’t even have to irrigate most of the time, because the wide spacing allows me to garden with the rain.

Welcome back! I’m sitting here in the middle of an unirrigated row garden three feet apart various brassicas growing and they’re doing awesome and it’s barely been raining. Let’s take a look at the system real fast and I’ll show you what we did.

I am officially crazy about single row gardening and here’s why. This area back here is terrible soil. I’ve got great looking plants on it but it’s terrible soil. This area was where we had our pumpkin patch this last year and there were spot applications of really fertile stuff and by really fertile stuff I mean all of our leftovers out of the fridge bones, meat, scraps, old beans and rice and whatever else, buried in pits with charcoal and ashes, and then we made mounds over that and we
put a little bit of Steve Solomon’s special magic micro nutrient mix in each one of those hills and we turn around and we planted. Every eight feet across this whole area we had a pumpkin hill and you saw we got 400 pounds of pumpkins out of this little area, out of really crummy soil but we didn’t improve the ground all in between them. So this fall when I decided to do gardens back here, I said you know I really want more brassicas. I ran out of broccoli and I ran out of radishes and cauliflower and that sort of thing before I really wanted to.

We didn’t have enough to put away or freeze or anything we had a lot of fresh eating in the spring this last year but I want more brassicas, by golly! So this area back here, before it was the pumpkin patch, I had the rows running this way and they you know they did okay but we have this big problem here where you get a ton of rain and then you get no rain for weeks and then you get a whole ton of rain again.

So even though I have well-draining soil, that area got rutted up and the limited topsoil that I had was just kind of washing away sideways in some of these rains. And it just pounds! The rain just comes in, we’re talking like six inches in a day, 10 inches you know, a foot in a weekend which is ridiculous! So I took the permaculture concept and I ran the rows this time on contour. They’re running the way the slope goes back, they follow and they go across the slope counter to the slope so they’re perpendicular to the slope and instead of doing the regular beds that I normally would do in the Grocery Row Gardens, four-foot wide beds where I put maybe a couple of rows of vegetables in them or three rows of vegetables in them, I gave them single mounded beds.

How the Row Gardening Method Works

Each one has a single mounded bed with a row of crops on top of it so they have tons and tons of space and this is one of those things that you can get away with with single row gardening. You can get away with having poor soil and poor nutrition in the soil because the plants aren’t fighting as much for a small space. If I made really intensively planted beds they wouldn’t be as decent and I would have to water them.

Having this wide spacing means there’s less water and less fertilizer and less fertility that is being fought over. So instead of having a really really highly fertile small space with lots of irrigation we’re sharing probably that same amount of fertility, but we’re sharing it with plants that are wider apart, so it’s like one loaf of bread getting divided between 20 people compared to one loaf of bread being divided between two people. We have more space than we have fertility, so we spread it out and the plants are getting enough fertility now and I’m not having to carry irrigation out here or try to figure out how to run a hose all the way from the side of the house. You want to see how far it is from the side of my house where the hose is to right here? I’ll show you. (Video clip shows long trip from faucet on side of the house to distant garden rows.)

That’s a long way for me to carry a hose. Instead, when it’s dry for more than two weeks, I’ll take a couple of watering cans and we’ve got this rolling cart, I’ll put five-gallon buckets in the cart and I will mix a nutrient solution into water and roll out those buckets and then I’ll fill watering cans and just give these a drench down these rows.

We do that in the evening so it absorbs it through the leaves and through the roots and they grow great on it and it perks them up. They found that by fertigating like that, that is adding some fertilizer to your water when you water, really helps with moisture stress much more than just dumping water on them. It gives them what they need, it floods the root zone. Part of the problem with moisture-stressed plants is that they’re not able to pull up the nutrients that they need, so by drenching them with a light nutrient solution, the water is going down around the roots and bringing them the nutrients they need to keep growing.

Before we go any further with today’s exciting content i would like to thank my sponsor, Squaresnake!

Another thing is because these are three feet apart, again they don’t need that much water. If these were tight together in a bed these broccoli would be wilting regularly every day and they don’t really wilt much out here. I haven’t noticed them welting even in the middle of the day. It’s because they’re widely spaced and we’re not going to get significantly decreased yields we do just fine on this. As a matter of fact we’ll have more than we need. I already have all these radishes here, these icicle radishes, and i’ve been bringing them in and they are super juicy super sweet with a nice bite underneath, and then they’re just doing that on minimal care. They’re just rows out here. We come out and hoe occasionally and we water it with the little bit of nutrient solution occasionally. I think I’ve done that twice in the last month and a half or so since we put these beds in but we’re getting plenty, and these actually need to be thinned out farther because these broccoli should be at least a foot and a half or so apart in the rows. So what I’m going to do is take some of the smaller ones out of here and transplant them into where I have gaps where different critters have chewed through rows that I have in another garden. We’ll just use them for transplants and move them on.

If you have never grown in a single row garden because you think it’s old-fashioned, it’s the way people used to do it, and it’s not as trendy and awesome and hip and it’s just one of those dumb things that our ancestors used to do that we don’t do anymore because we’re much more advanced, and we’re smarter, and now we have pressure-treated lumber we can make tiny beds with, I highly recommend it.

I recommend taking a piece of your yard if you have the space and spacing your plants wider giving them three-foot spacing, giving them nice single rows that you can hoe around. Just till the area under, put in your rows, mark them off before you plant, just go down and dust a little bit of fertilizer in each one of those rows or do what I did and till some alfalfa pellets in, and then follow it up with a little bit of micronutrient mix from Steve Solomon or whatever you have. Bone meal, blood meal, fish emulsion, you know whatever you want to use. Give it a try. I think you’ll be surprised by how well they grow, particularly if you plant at the right season, and you may be able to do it with just the rain that falls from above.

It’s definitely worth experimenting with. Since I have moved to a larger garden space I have found that this is a dead simple way to not have to babysit the garden but to get extra food for the family in a less-maintained area that is farther out from my house without having to drag a hose around. So check it out and be sure to also check out my book Grow or Die: The Good Guide to Survival Gardening, and until next time may your thumbs always be green.

@The Brilliant Homestead: Four Ways to Dig a...