Learning Beekeeping from an Experienced Beekeeper: A Visit with Judson Carden 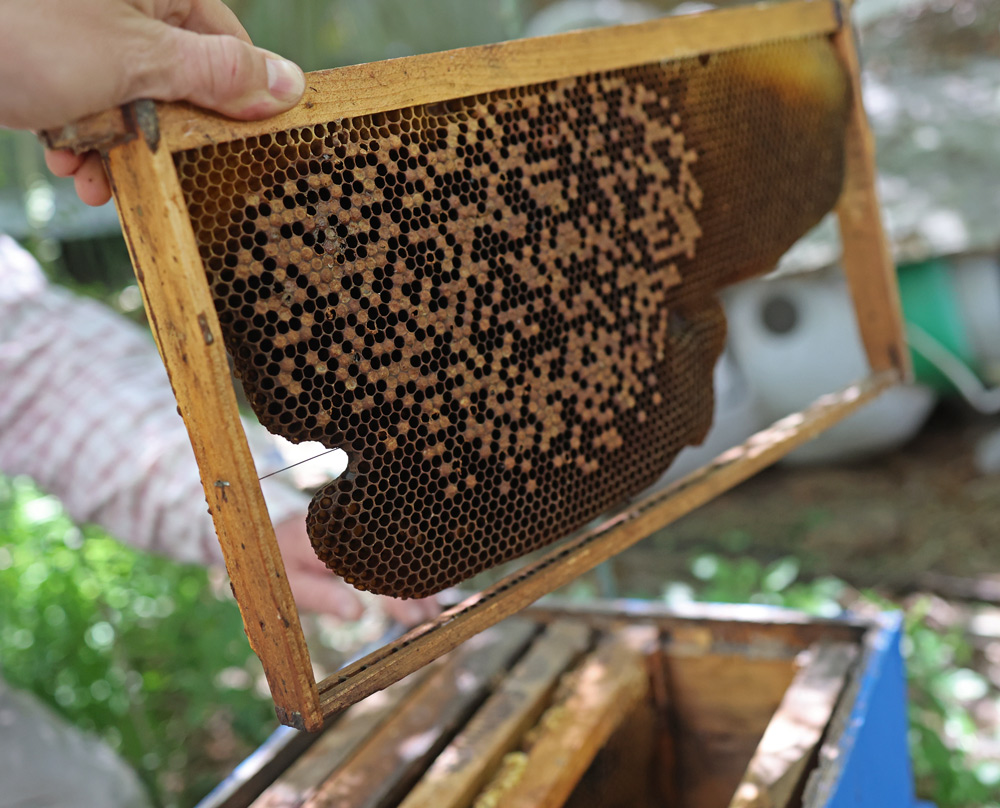 Yesterday I met the man that harvests the honey my children eat on their daily oatmeal.

His name is Judson, a rare name which also happens to be the name of my late grandfather, Judson Greene.

Last week Sam Singleton from Scrubland Farmz brought me two bee colonies in nuc boxes, which we set up in the back pasture. 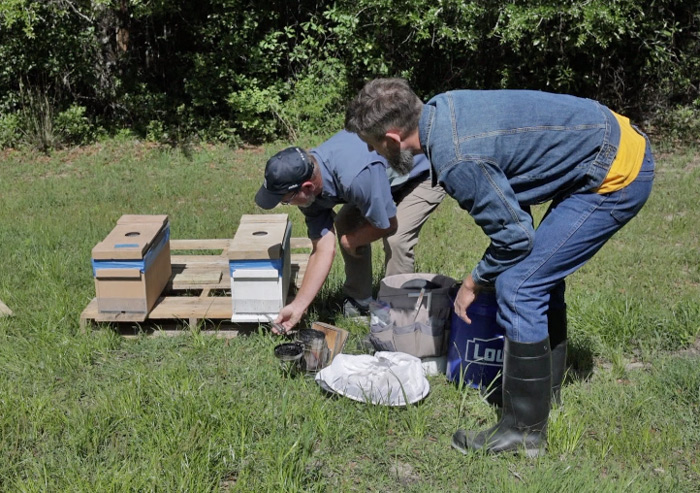 Those little boxes aren’t big enough to keep the bees in long-term. In fact, Sam said we should expand the colony on the right in the white box within a week.

I ordered a Langstroth hive for them a week ago but still have not received it in the mail. Since I was also interested in some alternative beekeeping methods, I built a Langstroth Long hive with my son CJ this last week in order to house the bees, assuming I’d be able to steal a few frames from the incoming Langstroth box.

Yet the delay in shipping was making me nervous, so I decided to call the number on the jar of honey sitting on the counter and ask Mr. Carden if he could spare a few frames. I’ve been buying this honey from a local outlet for the last couple of years since we moved here. Now I decided it was a good time to meet the beekeeper!

To my delight, he invited out not only to come “borrow” a few frames to put in our new hive box, but to also visit with him and see his apiary. I took two of my sons and we headed out past Atmore.

His house was easy enough to spot. A sign out front said “Bees at Work! No Spray Zone!

When we got there, we were greeted by he and his wife and invited to sit down on the porch.

We talked for a while about how he got into beekeeping (65 years ago as a boy he was given a box of bees after a beekeeping neighbor was forced to give them up because they were stinging the lady next door as she hung up her laundry) and how he figured out the proper screening size for the bottom of his boxes which would let hive beetles and mites fall to the ground while keeping bees safely in (6 holes per inch, rarely available and he has to custom-order it from a place called McNichols in Atlanta).

Then we went out to see a box with a few of his different frame experiments. 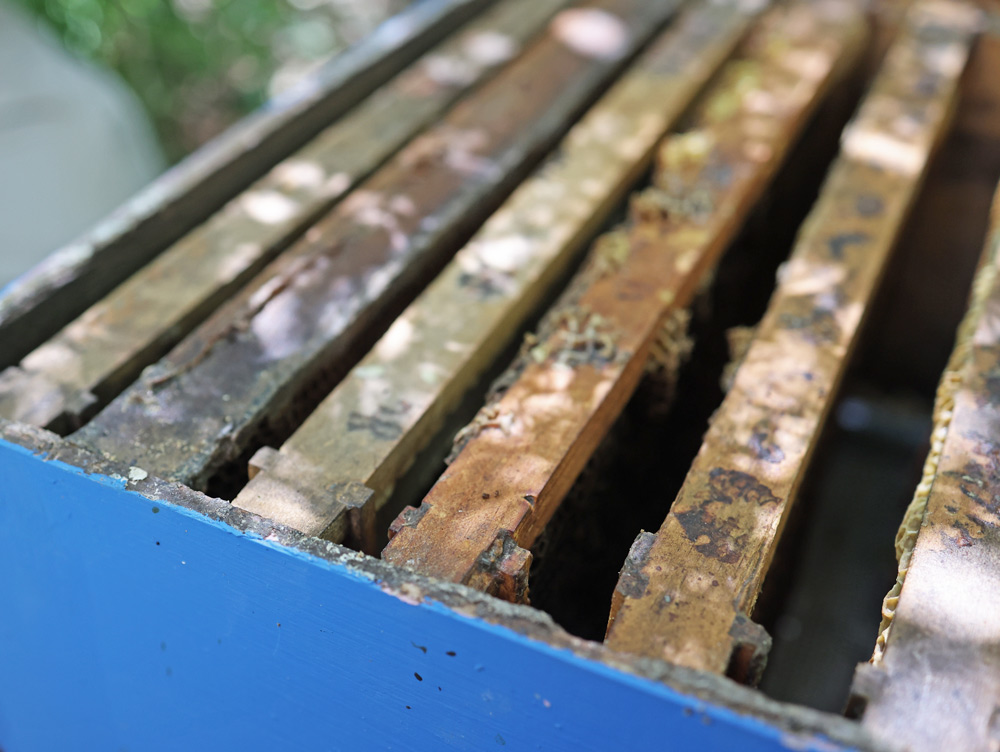 Judson keeps 9 frames in a ten-frame box, and 7 frames inside an 8-frame box. He uses Langstroth frames, but has redesigned the boxes to be deeper than standard so he can put screening and insect traps in the bottom of each one.

“Otherwise the hive beetles will tear up your hives,” he told me.

Here is one of his boxes with a slot and tray in the bottom: 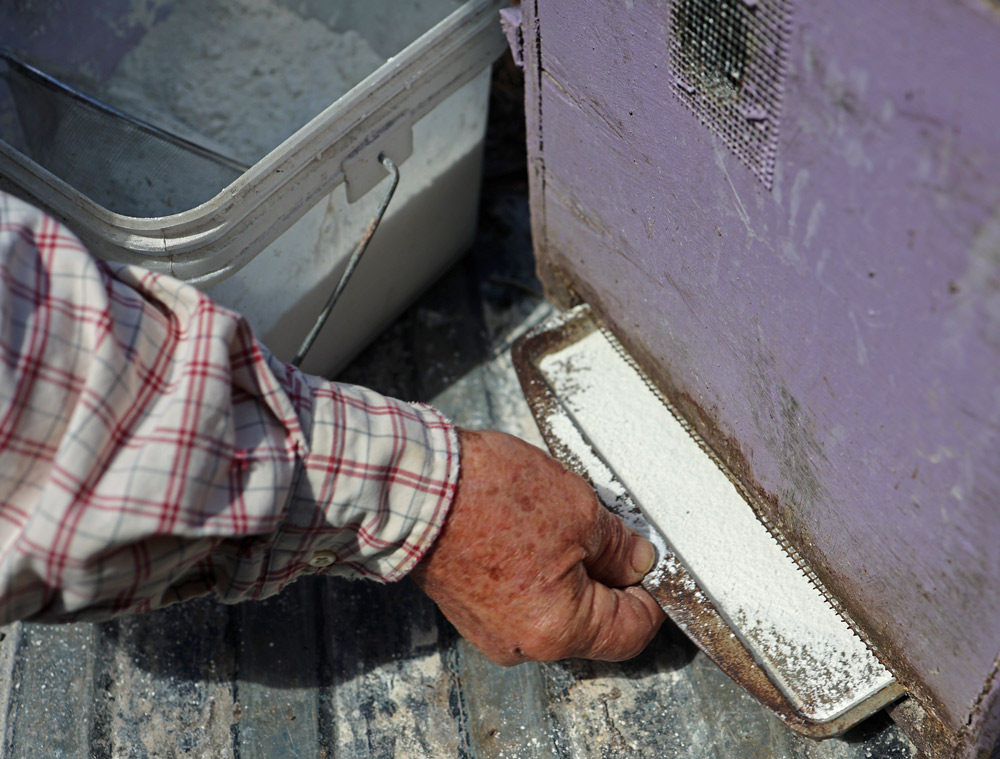 Note the screening above the tray. Beetles and mites fall through into the tray beneath, which is just a cheap baking pan from the Dollar General.

The white powder is mason’s lime, which he sifts onto the trays. 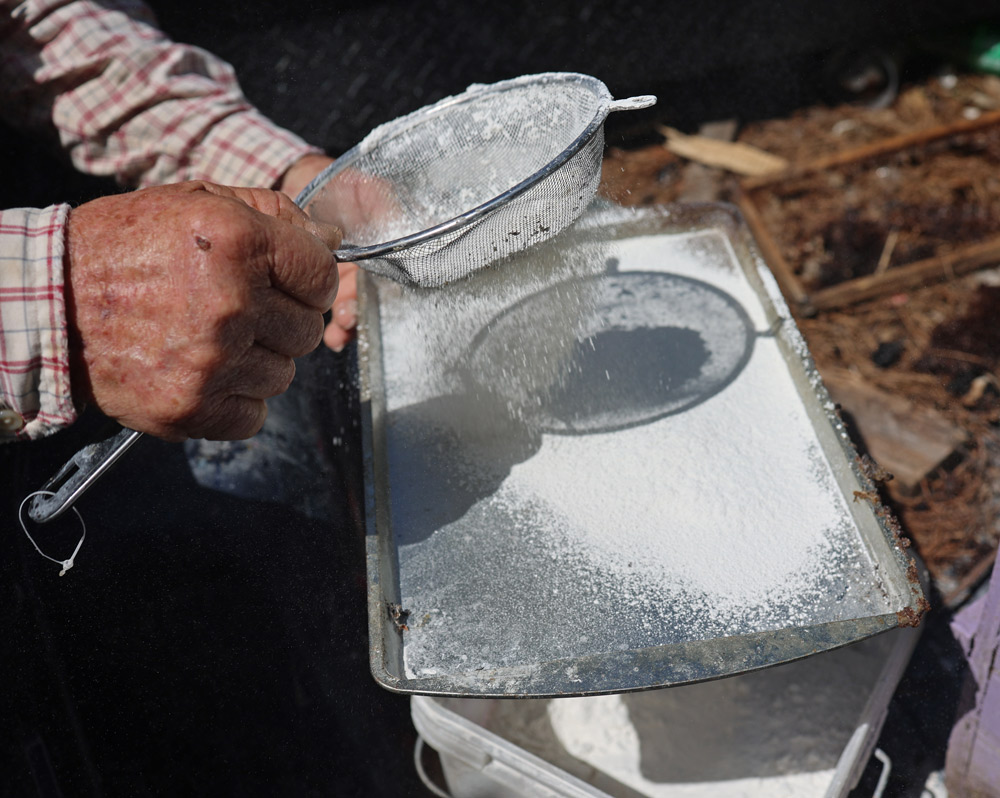 He also tried diatomaceous earth but told me the lime has worked better for him.

He also used vegetable oil in some of his hives, which was quite efficient in killing pests. 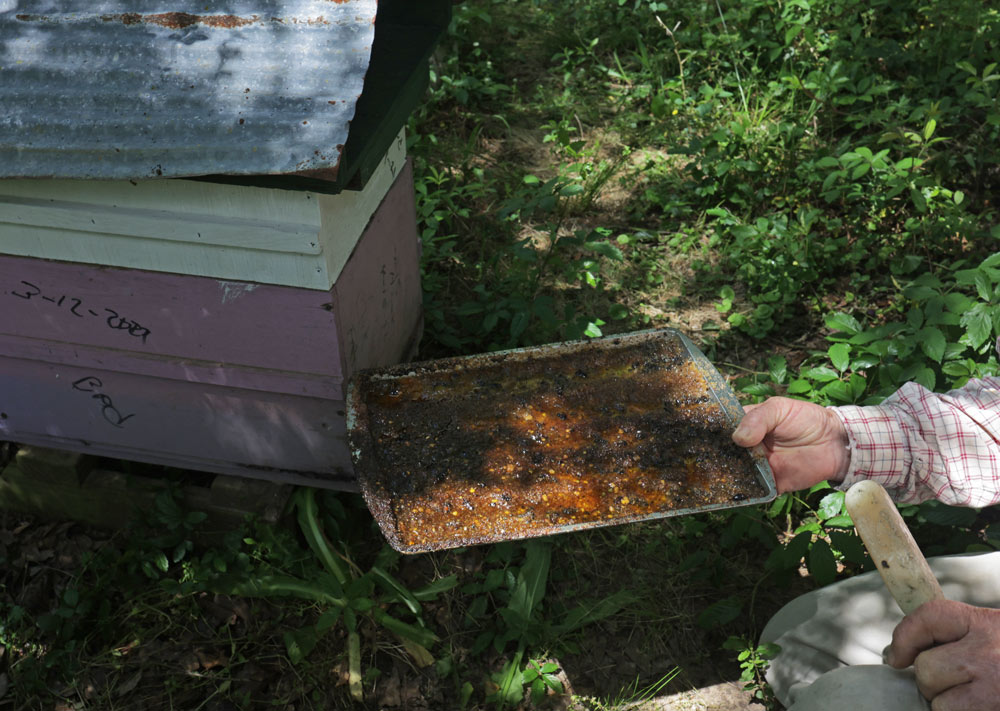 “The problem with the oil, though,” he said, “is that the hive has to be perfectly level so the oil stays in the tray properly.”

In his backyard is an array of brightly painted bee boxes. 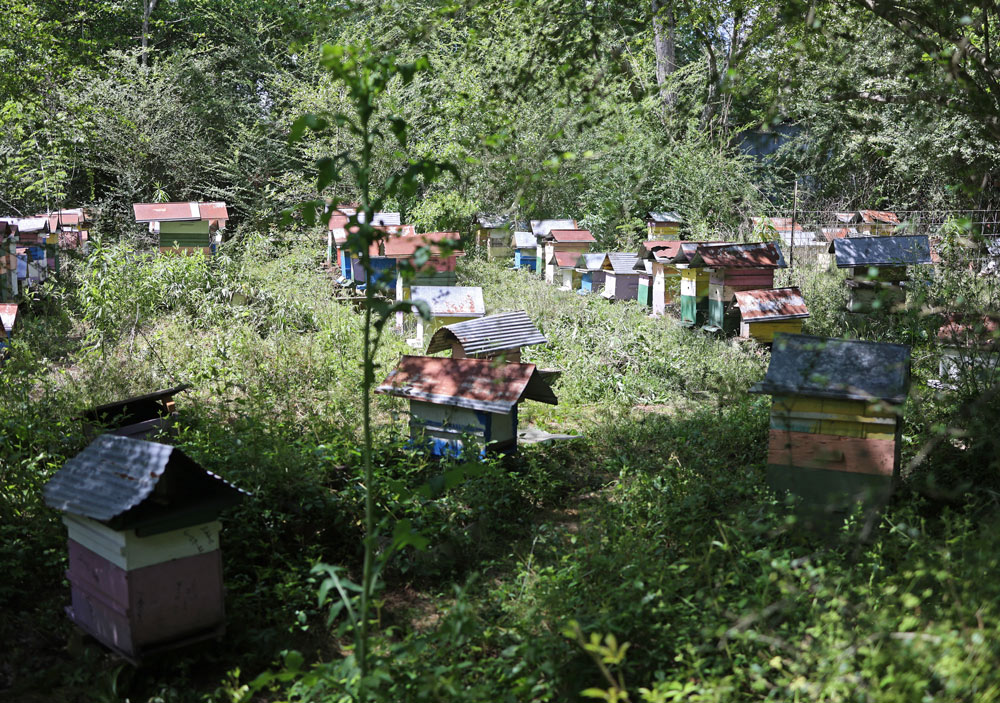 “It’s all overgrown,” he told us. “It’s not really fit for showing.”

I thought it looked beautiful. The bees were everywhere, filling the air with the throb of busy wings. 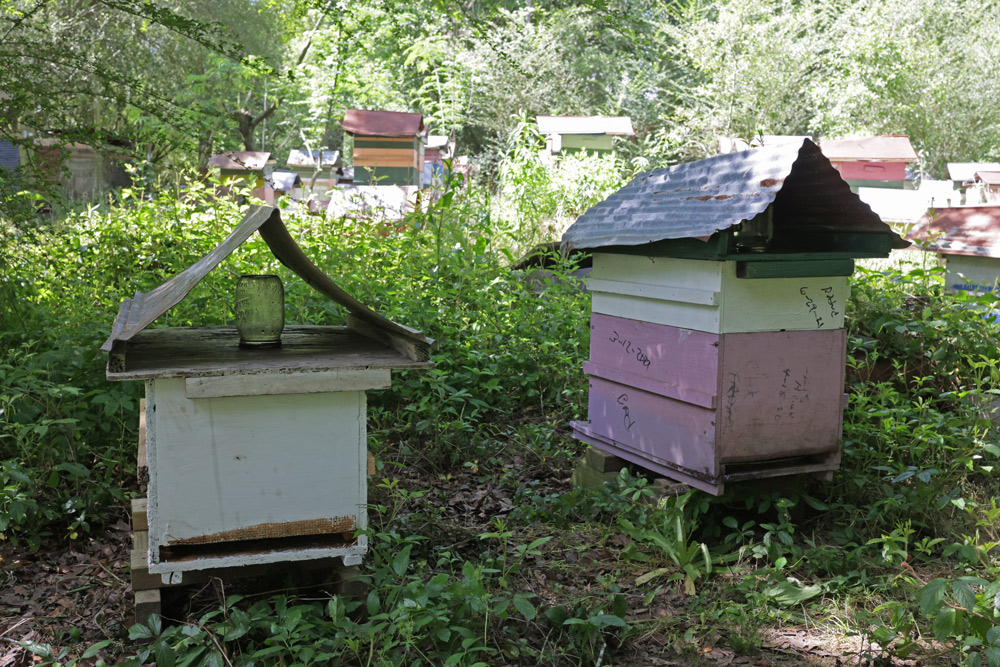 “You know why they’re all different colors?” Judson asked. “It’s because I get paint half-off at Lowes when they mix the wrong color. I’m cheap!” 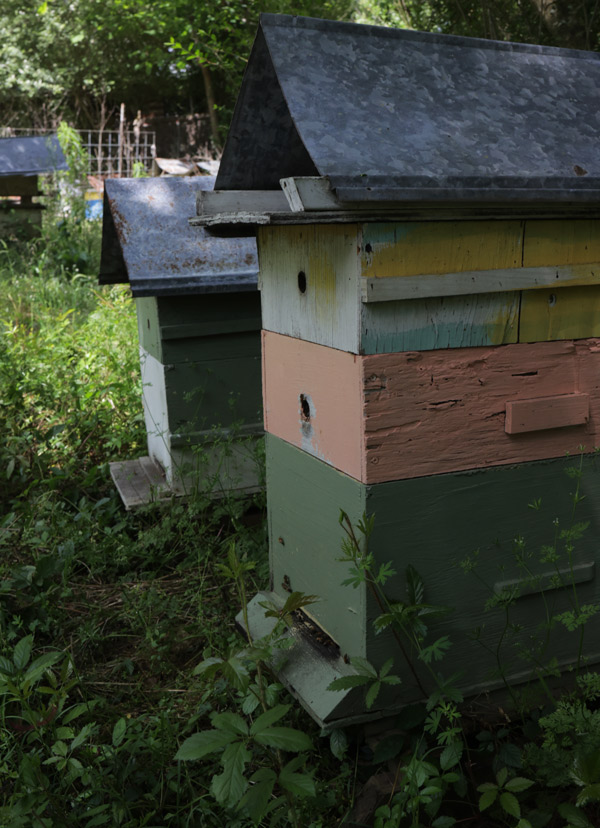 “Why do you put the metal roofs on them?” I asked.

“Gotta keep the rain off,” Judson said. “If rain gets into the hive it’ll chill the brood – you’ll see dead baby bees being taken out after a storm sometimes if you don’t keep the weather off.” 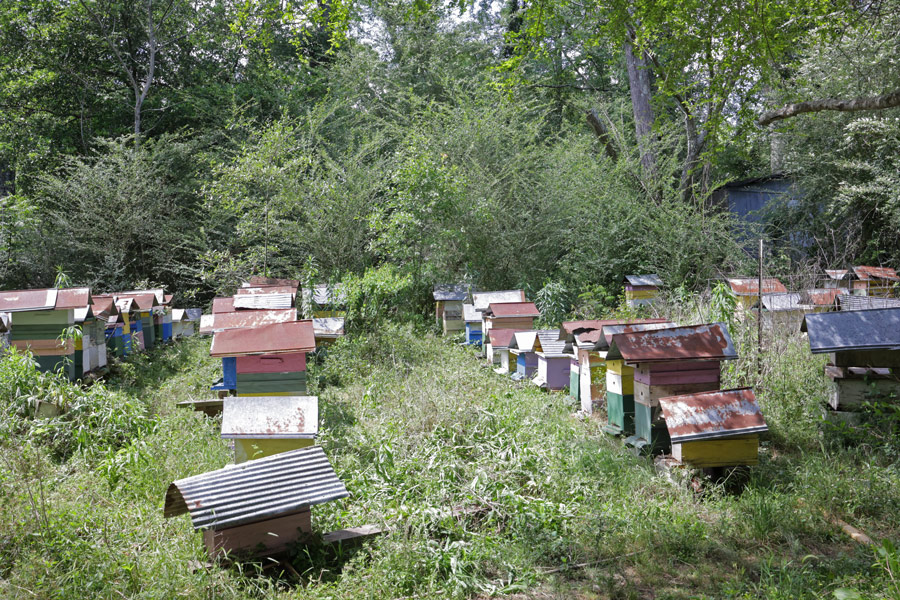 “Let me show you a trick the bee supply companies don’t want you to know. You see this frame here?” 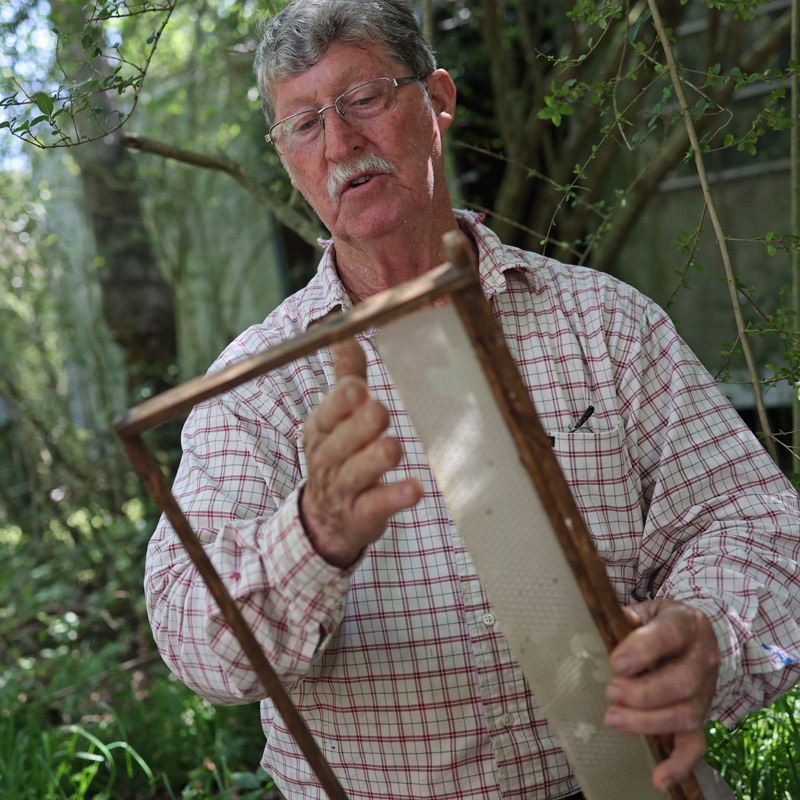 “If you cut a sheet of wax foundation into strips, you can just mount one strip of it and the bees will build down from there. I just tack it in and run some wax down the groove and the bees build right on it. Here’s one they built out on.”

“They work their way down from the top and build off that first starter piece and you don’t have to buy all that foundation. I also experimented with not having any frame at all, just a top bar that angles down in a ridge. I paint a little wax on the bottom and the bees build from there.” 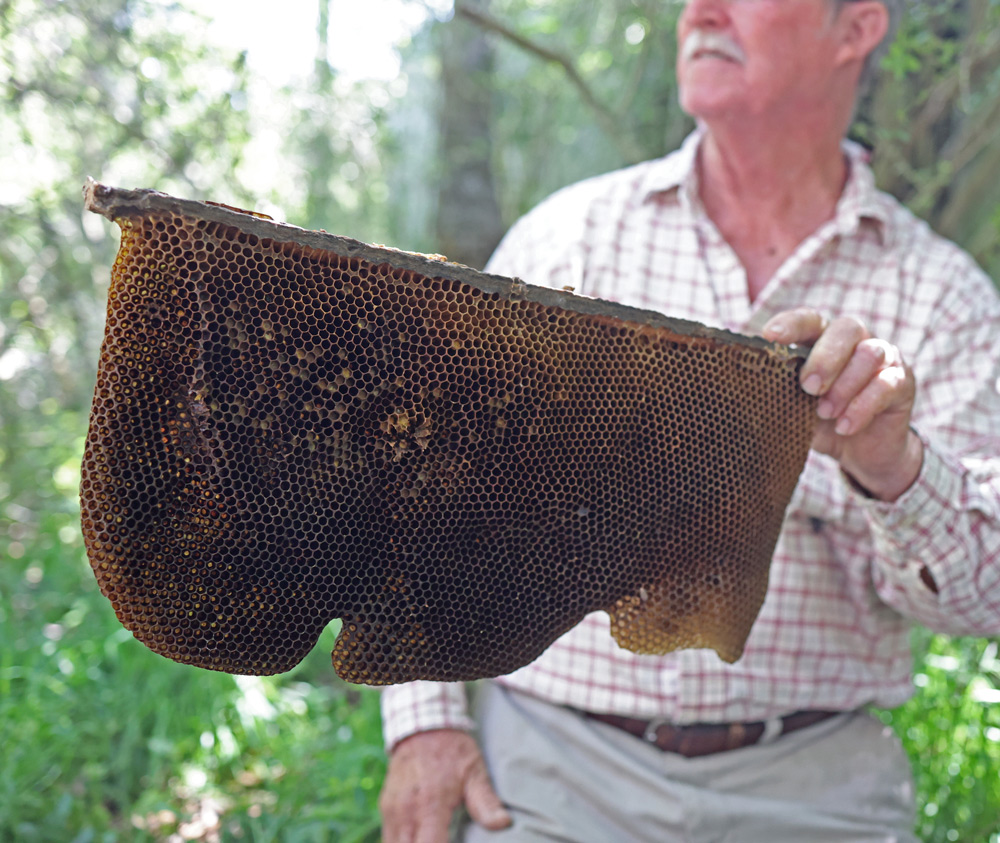 “You gotta be careful, though, because that comb will break off easily on a warm day if you turn it the wrong way.”

We walked around the edge of his yard and he pointed out a few of his favorite nectar-bearing plants.

“This privet hedge is great food for the bees. I love overgrown hedges. They’ll make honey from this for a month, and that honey is so clear you can read through it.” 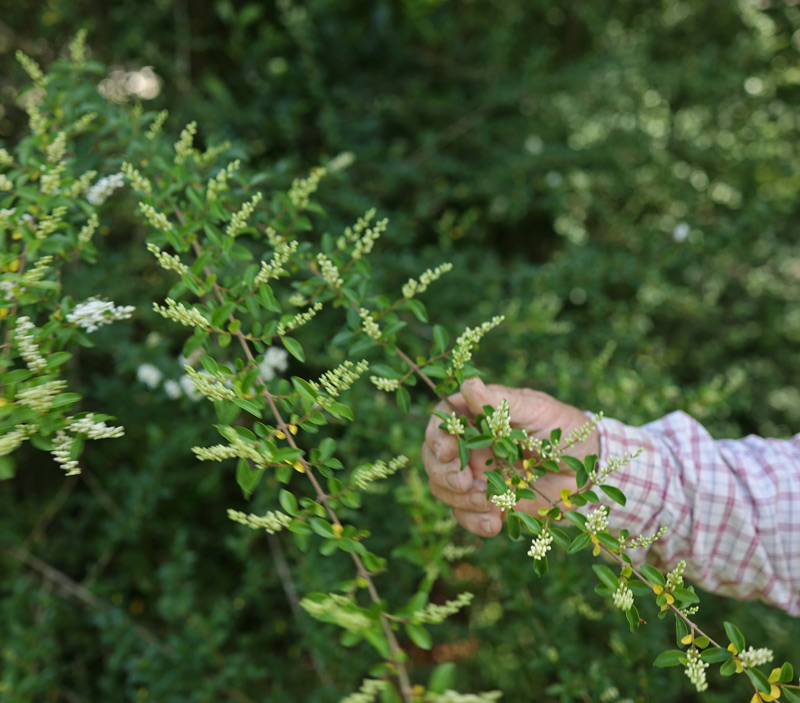 “Another tree everyone hates is the popcorn tree. But I love ’em. The bees make a great honey from those blooms, and they bloom the entire month after the privets are done, making a dark honey.” 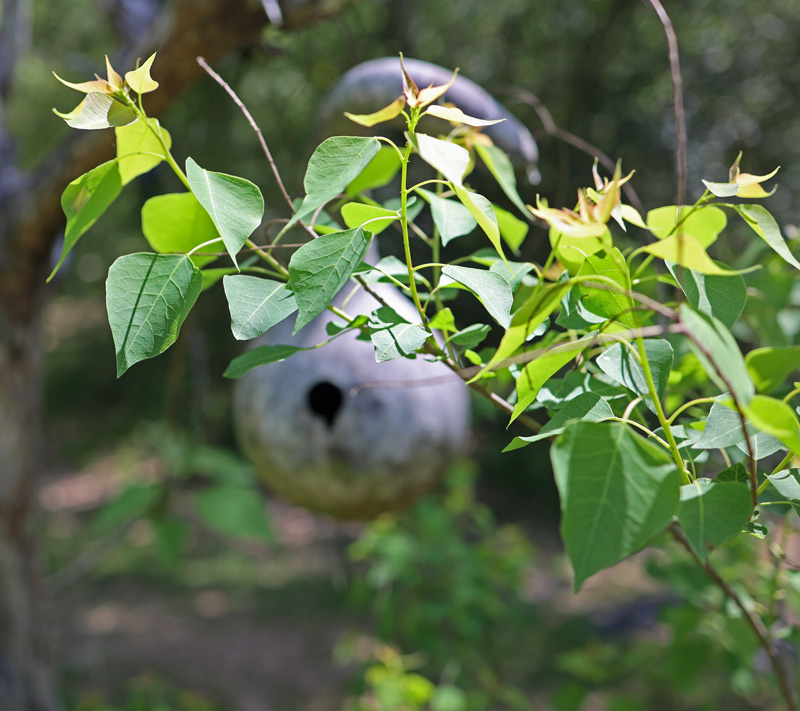 “It seems like all the invasive plants people hate are often the ones the bees love. You don’t want to keep bees in a place that’s all clean and tidy and perfect – they don’t have enough to eat, and people are probably spraying poison. Bees like popcorn trees and overgrown hedges and they love kudzu – they’ll use all the stuff we try to kill!”

Judson sent me home with some extra frames for my own beehive, as well as a bit of foundation and some wax to get the bees started.

When I arrived at home, I found two artists at work on my Langstroth Long hive. My daughter Daisy on the right, and local artist friend Kelsey Baker on the left. 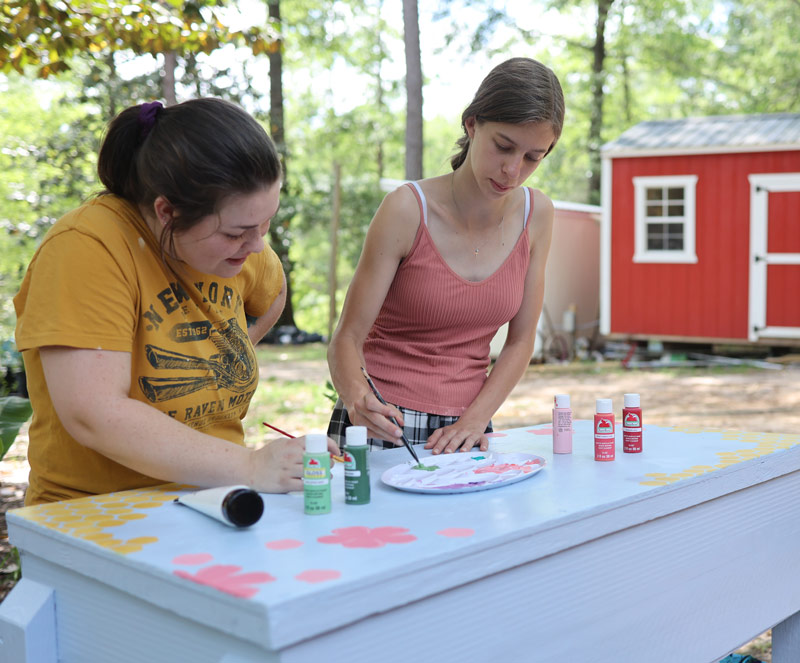 Kelsey went all-out with her design for this hive. It’s the prettiest bee house I’ve ever seen.

I’ll make sure to film the entire beehive in a future video. 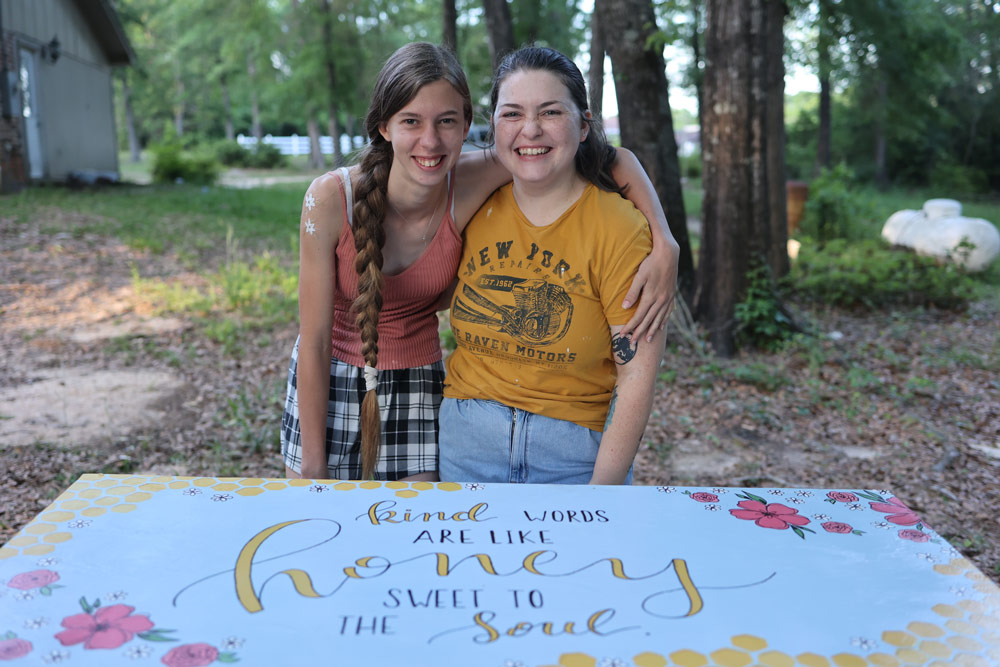 I hope the bees appreciate art!

Today we’ll be transferring our frames from the white nuc box into this new luxury beehive with lots more space for baby bees and honey. I’ll be applying what I learned from Judson as well as enjoying the beauty of the prettiest beehive in Alabama.

That is awesome all around. Especially compliments to Kelsey and Daisy on the beehive!

I wonder what the honey is like from dandelions.

David, have you seen this video by advoko makes on bottle bee-keeping? I thought it might be up your street: https://www.google.com/url?sa=t&source=web&rct=j&url=https://m.youtube.com/watch%3Fv%3D9ItlOFLTUAs&ved=2ahUKEwiDyMSQubX3AhUOzjgGHSyBB-0QwqsBegQIBRAE&usg=AOvVaw2f0FqKHQw_xzwdtSv-A7Uh

Yes – it is fascinating. Bees are really resilient.