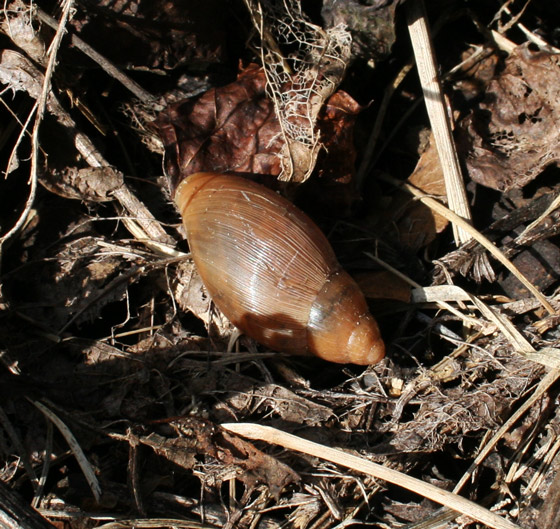 A couple of days ago I was wandering through my yard and wishing for
spring. As I did, I saw a small snail of a type I had only seen once
before.

He looks kind of cute, doesn’t he? (I’m using the universal “he” here
in an anthropomorphic sense, obviously, since snails are
hermaphroditic.)

About an inch long, pretty shell, kind of friendly looking.

At first glance, I got “the fear,” though.

Because I was afraid I may have stumbled across a juvenile version of this monster:

Those are giant African land snails.

If you click the image, you can read a nice, creepy article from National Geographic on how they’ve invaded Dade County, Florida… and how they like to eat the stucco off of houses, not to mention devour almost every plant species of agricultural significance.

Fortunately, after a little research, I nailed down my snail as being a native type – the “Rosy wolfsnail.”

Not only that, according to UF, it’s a predatory snail that will feed on giant African snails, among other types:

“Distribution: In the United States: Alabama, Florida,
Georgia, Hawaii, Louisiana, Mississippi, South Carolina and southeastern
Texas. It is widespread in Florida, including the Keys. It is
widespread, but usually found singly in hardwood forests, roadsides and
urban gardens (Hubricht 1985).

Comments: This snail was chosen as a possible biological
control agent of the giant African snail. Live specimens were sent to
Hawaii in 1955 (Mead 1961). Although feeding in Achatina was observed, as well as on the Asian tramp snail, Bradybaena similaris (Férussac, 1821) and native tree snails (Hart 1978), no real control was achieved. The snail reproduced rapidly in Hawaii and, by 1958, 12,000 snails were harvested for release in other Hawaiian Islands, New Guinea, Okinawa, Palau Islands, Philippines and the Bonin Islands. Chiu and Chou (1962) gave details of the biology of Euglandina in Taiwan. Individuals live up to 24 months and adults lay 25 to 35 eggs in a shallow pocket in the soil. These hatch after 30 to 40 days. In Taiwan, Euglandina consumed as many as 350 Achatina during its lifetime. Euglandina rosea is now considered invasive in Hawaii as it has caused the extinction of eight native snail species.”

Nice. It’s so bad to the bone that it makes other snails GO EXTINCT!

And it gets better…

(Click here to read the rest over at The Prepper Project because you totally have to see the weird videos I posted there!)

The Koi Pond at Bok Tower

We have some of those in Jackson, Mississippi. The ones in my yard are the same size as the one in your picture.

Very cool. I'm always amazed how some species can range across a swath of states… while others are only tucked into tiny geographical regions.