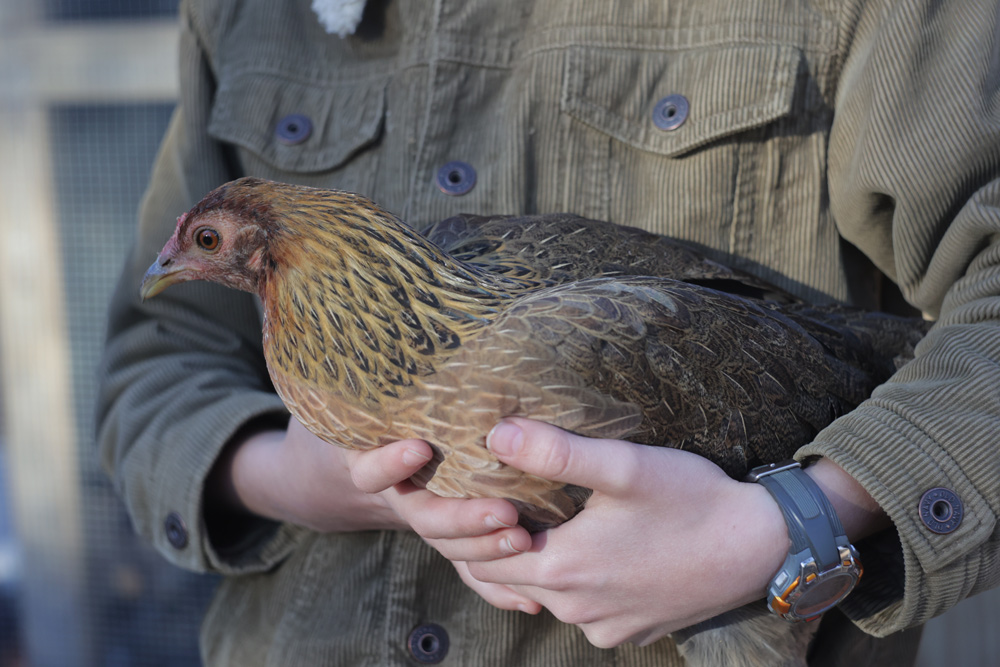 Yesterday I came home from church to find a note on my door. It had a man’s name and number on it with the cryptic message “Need to talk about chickens.”

At first I wondered if perhaps a neighbor was tired of the roosters crowing, or that maybe some hens had gotten out. But that didn’t make sense. Our neighbors were widely spaced, and some of them have wandering dogs, sheep and chickens of their own.

So I called him, and he said he wanted to trade me some junk – “but I have good junk!” – for a few hens, if possible. “I have some old knives and things,” he said.

So I told him to come on over and I’d be happy to see if we could trade.

He did, and we got talking about chickens and garden tools and such. He went back to his place around the corner to get a few things and I caught a few hens and we made a trade.

One of the items he had for trade was a fighting cock game hen, along with two mixed Rhode Island Reds. I was interested, because I’ve been working on breeding a better chicken thanks to my new friend Florida Bullfrog.

This is the game hen my neighbor brought over (on the right): 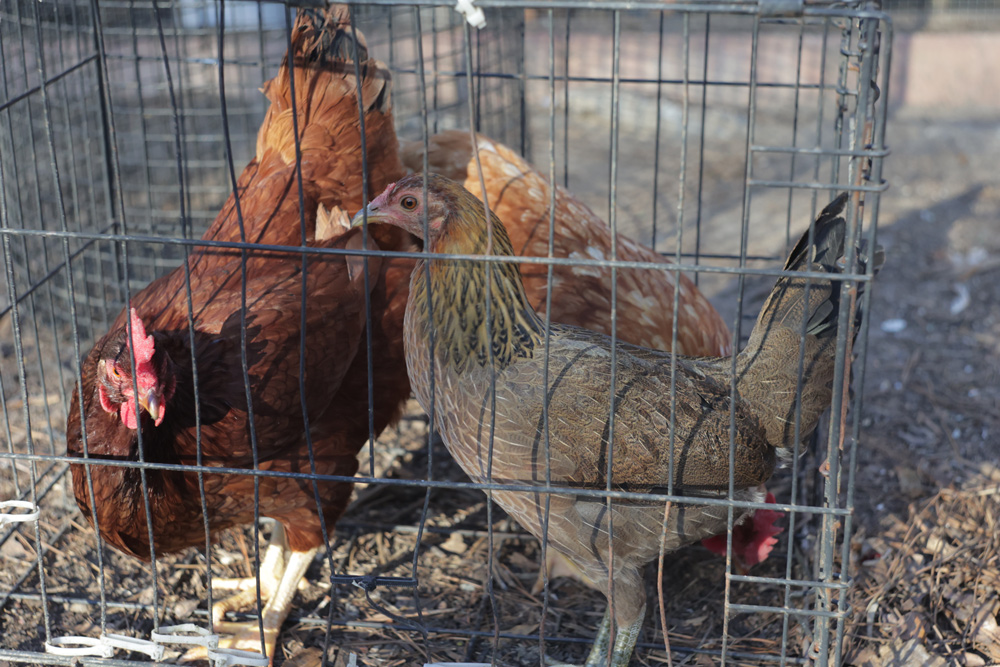 After trading, I emailed Florida Bullfrog some pictures and said:

Old guy just traded me this hen. She is less than a year old, very bright-eyed. He said she is full game, “cause she has them green legs, and that them guys raisin’ game birds don’t like to let their hens go for nuthin, but he got to trade fer one.” You can see her in with a couple of normal domesticated hens. He said “it’s the darndest thing – she makes this weird little sound when a bird fly over, and warns all the other hens. And she’ll fly like an eagle, way up into the trees!”

Does she look like one you’ve seen before? Reminds me of your Cracker birds.
Florida Bullfrog responded with:
Absolutely that’s a legit American gamefowl pullet of the old fashioned, wild, build and coloration. She looks gorgeous. It wouldn’t be possible to determine her specific bloodline but by appearance most gamefowl guys would label her a Blueface, McLean, or a variety of Hatch. Those are the surviving labeled bloodlines that retain most of the traditional look of deep-South American gamefowl.  Basically the look of a red junglefowl but larger.
The warning sound for a bird of prey is usually like a shrill, fast, chortle. Sometimes they’ll gobble like a turkey. There may actually be distinguished meaning between the shrill call and the gobble that I haven’t noticed. If I hear them do the shrill call it will be because an air born bird is coming in fast or gliding over higher up. The gobble seems like a general alarm.
For conformance to the physical traits I like in a gamefowl, the pullet you have looks superior. Look at your hen, how the legs are long and far forward on her body. That’s what you want on a gamefowl in terms of the bird being a specimen of the breed. 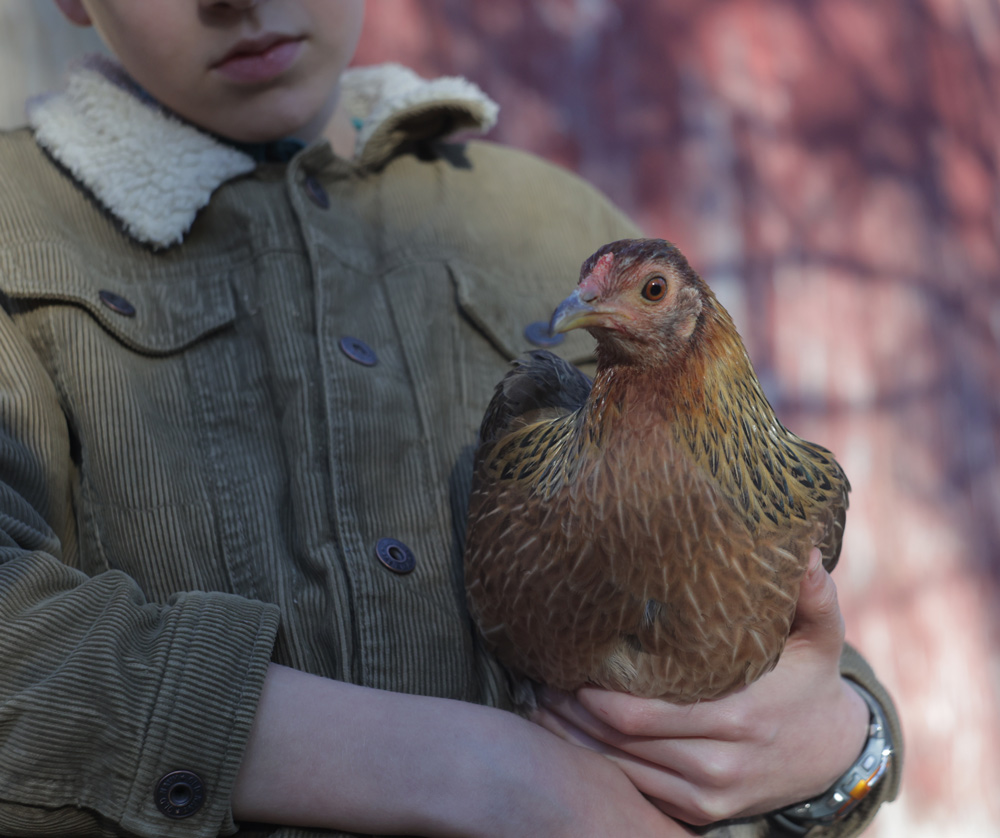 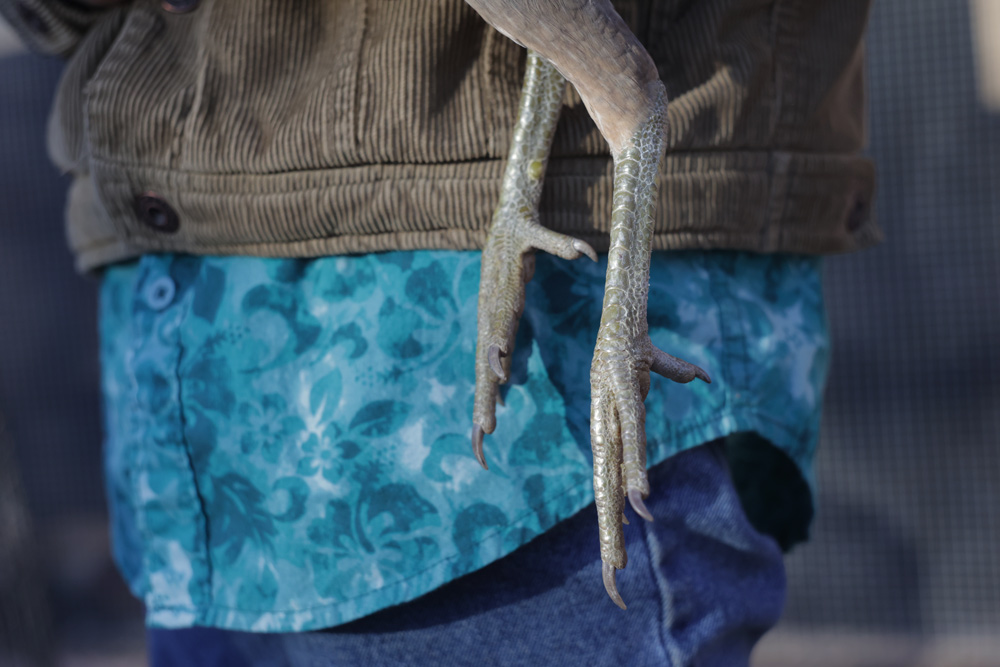 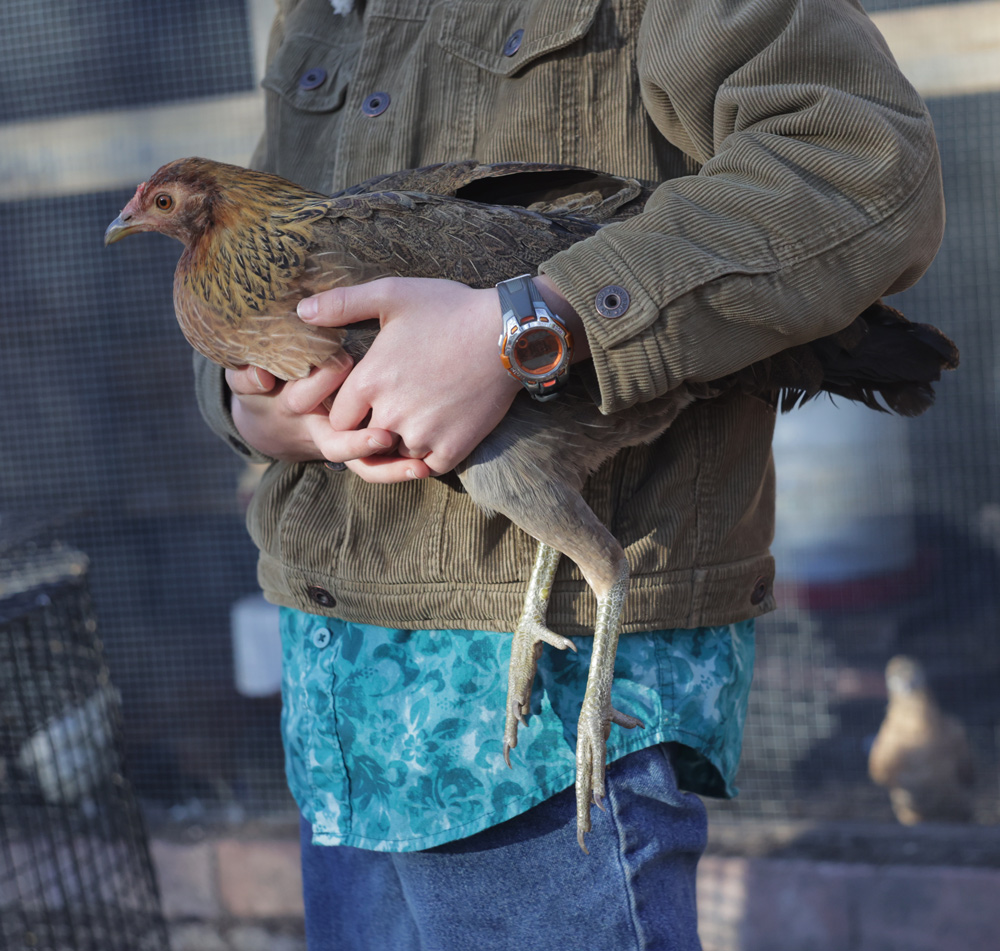 I also posted a picture on YouTube, and Bonnie commented:

“Mix Game chicken into any breed for improvement. As for predators, they don’t stand a chance! Husband tells of a Game Hen his mother had… who would fly to the ridge row of their barn when a hawk flew over… and she’d try to fly high enough to engage. One day a hawk obliged her by flying low. Husband says once the feathers cleared that hawk couldn’t move fast enough to get gone!”

We introduced her to the flock last night after dark – hopefully she integrates without issue.

In all, I traded nine of my hens for a Case knife, a fertilizer spreader, an old wheel hoe with a nice potato plow attachment, two Rhode Island Reds that didn’t look pure, that game hen, an antique skinning knife, and a little bitty pocketknife shaped like a peanut.

I’ll post pictures of the wheel hoe soon – it’s a real cool old piece. I am excited about it as well as this hen.

We’ll talk more about that tomorrow. Also, I am back in the office today after spending the end of last week in Blountstown at the Keepers of the Old Ways Survival Expo at the Panhandle Pioneer Settlement. I should have some videos of my talks posted soon. It was a great time.

All the Food Groups

My Friend Connie Bonbrest Shows off Her Florida Garden

Are Chickens Worth it? Let’s Count the Cost!

Bad Roosters Get the Ax

That is a beautiful bird, David! My wife has finally decided to pull the trigger and get birds this Spring. Really looking forward to updates on your flock.

Sounds like a great deal! Do you know if you can you get this kind of hen to protect the flock in lieu of a rooster?

She looks like a dinosaur with them green legs and sharp eyes. Maybe once you build your flock size up your daughter could start selling the hatching eggs too on her Etsy store.

I was given like 5 game chickens, 3 cocks and 2 hens by a friend. She had been given them by a neighbor that left the state during pandemic, in the first month. They were gangly chicks at first, kind of teenagers? Then the cocks decided they’d fight. And one is dead, one is outside the chicken pen for a few weeks without being attacked by anything. And one is still with the other 30 or so chickens, including 6 roosters. I don’t get it. Outside cock(Loco) goes crazy when he gets close to the pen and bloodies himself on the fence. So we have a random rooster roaming the backyard now. BTW, we have coyotes in our neighborhood, among other predators. Didn’t think he’d make it this long.

David, I was looking for an email for you but couldn’t find one. Do you provide consulting services for a fee? I have a lot of weeds on my pasture (5American beauty berry and dog fennel primarily, but also some thistle) but I don’t want to use grazon. I’d like to know what if you can advise me and I’d be happy to compensate for you the me and advice. Please email me and I will send you my phone number.